On the Australian pandemic scale of confusion and disorderliness it was among the worst. In politics these days are simply referred to as “messy”. 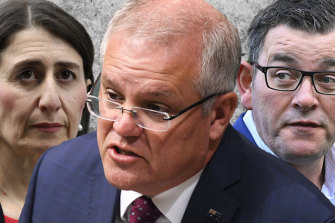 After a long and gloomy day in the nation’s capital, a battle-weary Prime Minister did his best to put out spot fires while trying his utmost to defend the very deliberate road chosen out of the pandemic by national cabinet months ago.

“There are no easy solutions here,” Scott Morrison told reporters at The Lodge. “There are no
silver bullets.”

The lead up had mirrored the hectic days of March last year where the course leaders had agreed to chopped and changed by the minute.

Berejiklian, for months lauded as the most level-headed leader of the pandemic, had earlier stunned her state and territory colleagues and Morrison by demanding vaccines be redirected to parts of western Sydney to help with the “national emergency” unfolding in her state.

“We have been doing the heavy lifting for 18 months and if I may, we have tried to make sure that we keep the economy going, and we want to continue to do that,” she said. “We need to have a strategy at national cabinet that does think about the options for getting more jabs in arms in Sydney”.

In Melbourne, Victorian Premier Daniel Andrews – a week into his fifth lockdown – said no way, Jose.

“We have barely enough vaccine allocated to any of us so the notion we would be sending it away from here – we all have got need, all of us,” the Premier said.

Instead he said a national emergency needed Sydneysiders locked into their city.

“We need a ring of steel around Sydney so that this virus is not spreading into other parts of our nation. We did it last year to protect country Victoria, and our country. The same must occur in relation to Sydney, and that’s what I’ll be asking for at national cabinet.”

By the time the 2pm national cabinet meeting rolled around Berejiklian had read the room and softened her stance. Instead, she put forward a proposal that all GP vaccine doses across NSW – doses controlled by the federal government – be cancelled for the next six weeks and redirected to the local hotspots in a six-week blitz.

Morrison flat out rejected the proposal but has not ruled out sending extra doses their way.

While Berejiklian sees vaccinations as the way out, it is becoming clear Morrison views the way out of the current predicament will be through lockdowns, or in his words, through suppression strategies.

Morrison said there was “widespread agreement” in national cabinet “that we need to continue to lean into AstraZeneca, particularly in NSW”.

“The Delta strain of the virus is obviously very fast transmitting and we need all the other states and territories to be continuing to get up to the marks that we needed to set for ourselves to ensure we can get this job done this year,” he said.

And while Morrison may have been fuming at Berejilikan, he defended the measures she had taken in attempts to flatten the curve.

He said a so-called “ring of steel” was a decision for her but said the national cabinet provided NSW with an opportunity to dispel any myths the city is not under a hard lockdown.

With the national vaccine rollout notching almost 200,000 doses in the previous 24 hours, Morrison urged every Australian to take whatever dose was available to them.

“Vaccines can be the wind at the back of those trying to achieve that outcome,” he said.

Stay across the most crucial developments related to the pandemic with the Coronavirus Update. Sign up to receive the weekly newsletter.