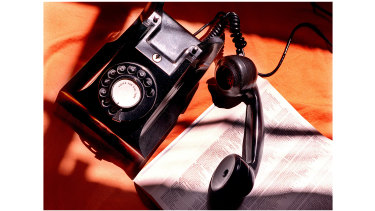 PEOPLE in Melbourne yesterday for the first time could dial 0171 — and speak to London almost immediately.

Their calls sounded as clear as if they were speaking to their next-door neighbor.

They were using the new co-axial cable link with London, opened earlier yesterday.

“The Age” last night rang its London correspondent Herbert Mishael and was put through in 75 seconds.

This was well above the average for this time of the year.

A call to England costs £3/15/ for the first three minutes and £1/5/ for each additional minute. 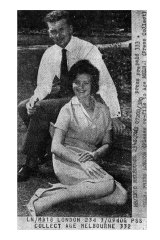 Ann Tudhope, of Prahran and her fiancé Tony Lang in Prahran Gardens.Credit:Age photographer

Twenty people yesterday booked calls to England for Christmas, and the demand is expected to accelerate, as the public becomes aware of the advantages of the new system.

The spokesman said that apart from the evening hours of Christmas day which were already heavily booked, there was plenty of time left in the Christmas – New Year period, even on Christmas day, for overseas calls. However, intending callers were advised to book their calls.

THIS PICTURE went to London last night — and then came back.

The Journey — by way of the new Commonwealth cable which was opened yesterday — took less than an hour.

The picture was taken in Melbourne by “The Age” yesterday. 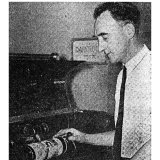 At 6.59pm Mr. Bill Ferguson, O.T.C. photogram officer, flicks the switch to begin sending through the picture file on an open line to London. Credit:Age photographer

It shows Ann Tudhope, of Prahran and her fiance Tony Lang in Prahran Gardens after Tony arrived from Scotland yesterday. The couple met when Ann visited Scotland.

To test the new cable, “The Age” sent the picture on a cross-the-world jaunt.

The picture was sent from the Overseas Telecommunications Centre in Lonsdale Street at 6.59 p.m.

In nine minutes it had been transmitted to London, via the cable route from Sydney, Auckland, Fiji, Vancouver, Montreal, Oban (Scotland) to London.

In the overseas photogram section of the British G.P.O. in London the picture was checked and processed in 40 minutes.

At 7.47 the return transmission began from London through to “The Age” picturegram receiver, and in another nine minutes the complete picture had been transmitted back to Melbourne. 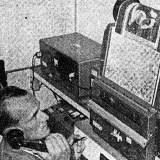 News pictures will be able to be sent from overseas to Australia more quickly and effectively by the new cable link.

The service will be available round the clock instead of only at certain times, as with radio transmission. The pictures, as with telephone and radio broadcasts, will be clearer, and little or no waiting time will speed up pictorial coverage of news events from other parts of the world.