It was a public holiday, but there was no footy and no good kids shows on TV. Channel 7 did have the Royal Children’s Hospital Good Friday Appeal, of course, a most worthy cause, but for a kid under 10 it wasn’t much fun. 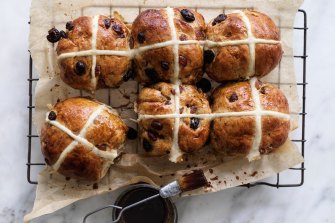 Hot cross buns were the only good thing about Easter.Credit:William Meppem

Seeing celebrities reading out something like, “$10 from the Thompson family in Moonee Ponds, and they’ll double that if this is read out on air. Thank you to the Thompsons, a very generous donation,” and then singing some lame (to me as a kid) Glen Campbell or Neil Diamond cover was pretty uninteresting stuff.

The only interest the Good Friday Appeal really held for me was seeing if the total money raised would set a new record before the appeal ended at midnight. (I did care about the poor sick kids in hospital, I swear!) Invariably, it did, and I’d feel kind of proud reading about it in the paper the next morning.

To make Good Friday worse, us Catholic kids had to head along to the “Stations of the Cross” service at 3pm in the afternoon, where Father O’Reilly regaled us with the story of Jesus’ last hours before he was crucified: told in 14 parts, or “stations” as they were known. 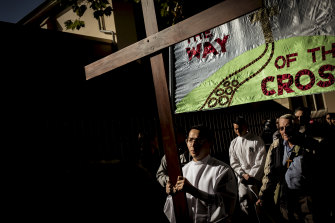 Members of Melbourne churches take part in the Stations of the Cross walk. Credit:Chris Hopkins

I never felt any obligation to the Church, but I did to Mum and Dad, so I would go to church to make sure I didn’t disappoint them.

That all ended when I moved out of home. By that stage I had learned to amuse myself in other ways, and I could get through Good Fridays by reading a book, or catching up with friends – or, by doing the Friday cryptic crossword (except in the years they did not publish The Age on Good Friday), compiled by the famous DA, aka David Astle.

With a cryptic crossword to do and no chance of my heading off to church to dutifully suffer through the Stations of the Cross, Good Friday became for me not a holy day of obligation but more a jolly day of abrogation.

With the introduction of Good Friday footy in the AFL in recent years, it’s become an even jollier day – especially when my beloved Bulldogs play and win.

But DA has a way of tempering that jolliness. His cryptic crosswords are rarely – in fact never – easy. Even his “quick” crosswords drift into cryptic territory. But they are an enjoyable challenge, much more so than listening to Father O’Reilly (sorry Father).

In theory the Stations of the Crossword ritual involves me heading to as many as 14 cafes and pubs during Good Friday, perhaps with friends, and attempting to fully solve the DA crossword of that day along the way.

In practice, it varies from year to year. I might only get one or two cafes in some years, and in others I might be making my attempts alone. In any case, Good Friday is now a day to which I look forward, rather than dread, thanks to DA and the Stations of the Crossword.

Andrew Gigacz is a Melbourne writer.