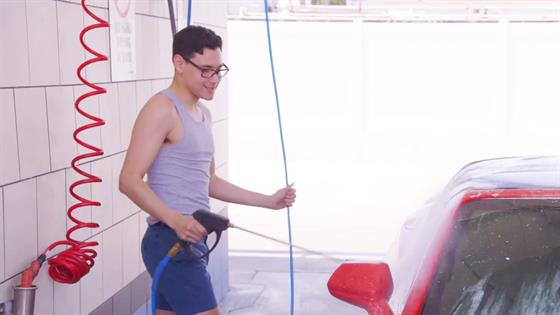 There’s one less task on Jamison‘s to-do list this week.

“Isn’t this romantic?” he asks his match in this clip from Tuesday’s new Dating #NoFilter, while the two singles go to town on his red Chevy convertible in the car wash drive through. Gregorio—not quite as chipper about the industrial strength hose he’s currently wielding—musters a palpably sarcastic “so romantic” in response. This was Jamison’s idea.

“Bet you never did this on a date before,” he smiles, rinsing suds off the hood as Gregorio scrubs the back end of his car with a sponge. Also, they’re wearing matching tank tops.

“I was very shocked when I came to see that it was a car wash,” the latter admits, definitely a little peeved. “I was like, this guy must be a loser and cheap at that.”

It seems like Gregorio might be projecting a little bit though, since he goes on to say he’s dated guys who own luxury vehicles before and in his experience, they’re “compensating or usually douchebags.” Can we abort mission on this date yet?

“Dude, if this date turns around, I would be blown away,” notes comedian Steve Furey as co-commentator Monroe Martin nods in agreement.

Never say never though because the clip ends with a couple of smooth moves from Gregorio as he polishes Jamison’s bumper and starts getting in touch with his “Charlie’s Angels vibe.”

Hear what all six comedians have to say about the car wash date in the full clip above!

Watch a brand new episode of Dating #NoFilter Tuesday at 11 p.m., only on E!