“It was a spicy time,” she says from her home in Fitzroy, joined on a rowdy Zoom call by bandmates Paul Bender (bass), Perrin Moss (drums) and Simon Mavin (keys).

That’s one way to put it. “Facing my mortality,” as she described it during a recent appearance on ABC’s The Set, is yet another. 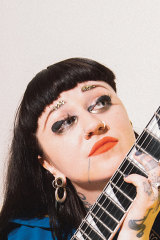 “It was really intense and deeply traumatic”: Nai Palm on recording after a cancer diagnosis.

In 2018, exactly half way through recording the album, with the band still basking in the remarkable achievement of Choose Your Weapon, an ambitious sophomore release that garnered critical goodwill, was sampled by Kendrick Lamar and Drake and attracted an obsessive global audience, Saalfield, then 29, was diagnosed with breast cancer, the same disease her mother, Suzie Ashman, died from when Saalfield was just 11.

She received the diagnosis just as the band had finished recording instrumentals for the album and just as she was getting ready to lay down her vocals, forever the sublime, soul-stirring heft of Hiatus Kaiyote’s songs.

“It was really intense and deeply traumatic,” she recalls, “but also a very powerful place to create from because you have deep, emotional things to process. Art is a very beautiful way of filtering through that and making sense of it for yourself. And so it was almost liberating when it finally came time to track vocals because I became obsessed with the fact that I was going to die. And whenever people are very close to death is when you want life the most.”

The usual nagging thoughts − “‘Oh, is this translating? Are people going to think I’m cool? Who’s going to listen to this?’” − became irrelevant, she says.

“It was just, ‘I need to do this because this is the thing that makes me feel most alive!’”

Saalfield says her late mother, a dancer who performed with the Australian Ballet Company, was on her mind throughout the making of the album because of what she was going through.

The title Mood Valiant, for starters, is a tribute to her mum. As the story goes, Saalfield’s mum had two Valiant station wagons when she and her siblings were growing up, one white, one black, and she’d choose which to drive based on her mood each day. If she’d turn up to school to pick up the kids in the black one, they’d know it wasn’t the day to mess with her.

Saalfield says going through such a stark parallel of her mother’s illness wasn’t just fuel for creative expression, it deepened her relationship with her mum.

Going through a stark parallel of her mother’s illness wasn’t just fuel for creative expression, it deepened her relationship with her mum.

“Being an orphan is a pretty f—ing strong theme to live with and that’s something that’s always been deeply ingrained in who I am,” she says (Saalfield’s father died when she was 13, after which she spent a period homeless).

“But the extension of that was, I’m literally going through the illness I lost my mother to, all the things she went through as an adult, even the same tests and stuff. That’s massive. I was 11 when she died; I’m 32 now. It gave me such an understanding of how strong she was.”

In October 2019, Saalfield was given the all clear. She’d undergone a mastectomy, which forced her to relearn guitar given she usually played it up against her chest (“I had to re-train the muscle memory or something,” she says). At which point the pandemic struck, lending a bizarre global proxy to Saalfield’s personal trauma.

It’s not surprising then that, having been born in such darkness, the songs on Mood Valiant are life-affirming in the deepest sense.

Mavin says making music has always been a “sanctuary” for the band. “It’s this world you can tap into that’s separate from day-to-day life. You sit at your instrument and play and it creates a sort of meditative state where you get lost in your own world. It’s a good release to have.” 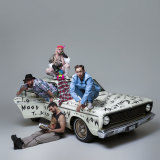 The album’s bright lead single Get Sun − recorded in Rio with cult Brazilian composer Arthur Verocai, whose 1972 self-titled debut remains a holy grail to jazz and funk-obsessed crate-diggers − is delightfully unbridled in its orchestration, a song so densely lush you wonder how they even decided they were done.

“Deadlines help,” laughs Saalfield. Mavin impersonates their record label reps. “‘Do you want your album to come out this year? Ok good, well f—ing hand something in then.’”

It’s perhaps that outre sensibility that’s left the band with an outsized following overseas compared to their reputation at home.

For a band of such creative innovation, whose accolades include being the first Australian act ever nominated for an R&B Grammy and mind-boggling cosigns from the likes of Prince (who tweeted his admiration for their single Nakamarra in 2013) and Beyonce and Jay-Z (who sampled a live version of The World It Softly Lulls on their 2018 song 713), you’d imagine they’d be industry beacons here, revered as one of our proudest successes.

Instead, they have but one ARIA nomination to their name (best urban album in 2015) and, despite being based in Melbourne, remain largely ignored by commercial platforms in Australia outside community radio. Do they feel underappreciated at home?

“I don’t think we play the game you need to play to exist in a super-monopolised industry here,” says Saalfield. “Basically to make it in Australia you need to get Triple J’s support and the right festival’s support, and they’re all kind of run by the same people. So if you don’t wanna do that you’re kind of shooting yourself in the foot to be commercially successful.

“But we’re successful in the sense that aside from the industry, people f— with us. So we kind of don’t even need it.”

Bender, originally from Tasmania, recalls a gig the band played at a dingy pub in Hobart years ago that highlighted the local apathy. “We had already played big shows overseas, we were getting acclaim everywhere and yet even that gig wasn’t full? It was like, ‘What else is going on in Hobart tonight, honestly? I know there ain’t anything going on in Hobart.’”

Not that they’re miffed at the industry indifference. In pride of place on Bender’s fridge is a printout of a recent email exchange between their manager and Triple J’s music director Richard Kingsmill around single Get Sun, where the latter asked: “So just confirming, the radio edit is 5 minutes, 37 seconds long?”

“It’s kind of like, how high are your expectations? And for this kind of music?” laughs Mavin. “It’s the last thing we’d ever think about when we’re making music, anyway.”

Hiatus Kaiyote’s Mood Valiant is out June 25 via Brainfeeder.

THE WATCHLIST
Find out the next TV, streaming series and movies to add to your must-sees. Get The Watchlist delivered every Thursday.