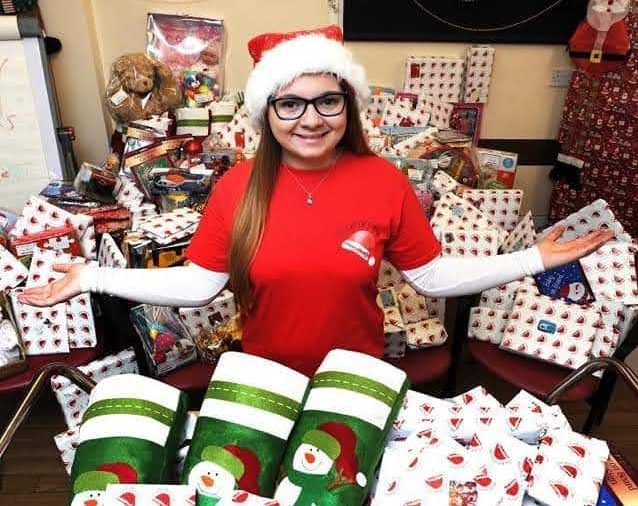 My great-grandmother, Elsie Richardson, was the most incredible woman – so sociable – and always helping her community.

Be it with organising the tombola at the pensioners’ club, or assisting with local fun days and fairs in our town of Didcot, Oxfordshire, she was happiest when giving what she could to others.

Growing up, I was pretty much always with her. So, when Nan fell ill at Christmas in 2012, and had to go into hospital, going to visit her regularly with my family was a no-brainer – we wanted to do all we could to make sure that she wasn’t alone.

Though it was great seeing her, I noticed early on that the ward didn’t really have any festive spirit. I was only 13, but I felt it wasn’t very special for the other patients – and though we were bringing Christmas cheer as much as we could, the general mood around the ward was a lonely one.

Since Nan wasn’t well enough to leave the hospital, my mum, dad, little sister and I decided to take Christmas Day to her – along with decorations and presents for the other patients to enjoy, too. It felt really special, and I know how much having us there meant to her.

Shortly after, I was diagnosed with long term health condition M.E. Although it was a challenging time, I was determined to keep Nan’s legacy of giving alive.

So, the next Christmas I wanted to do something on her behalf. With the help of donations collected at school, and with my parents, I gathered 250 presents to take to the elderly home and the hospital – slippers, jumpers, crosswords, really anything to help raise spirits.

After seeing how glum things were the year before, I wanted to be like my nan and spread some happiness.

And it worked – immediately I saw just how much of a positive effect that small gestures can have with people who are experiencing loneliness. Seeing the thankful tears and smiles, I knew we were doing something great. We soon adopted the slogan ‘The Gift of Giving’ for the charity work we did each year.

Now, nearly 10 years later, we’ve handed out over 80,000 gifts and expanded into a year-round organisation called Secret Santa 365. We offer assistance to anyone who needs cheering up, offering practical support and essential items to organisations who need a top up of provisions.

In the beginning, Secret Santa was something I organised purely for Christmas time – it’s a time of the year where so much pressure is placed on joy and being around people, so I wanted to help make sure that people weren’t forgotten.

As well as collecting gifts, we’d organise tea parties for older residents and wrapping parties – opportunities for people to have a chance to socialise, as well as helping us wrap thousands of gifts for distribution!

But as I got older, I realised that it wasn’t just the elderly that could do with social support and contributions – and people face various struggles, no matter the time of year.

So, we help in all seasons to anyone who needs us! We’ll put on arts and crafts events for kids at Easter time, give out chocolate eggs; if someone gets in touch about a child’s birthday that they need presents for, we’ll do what we can to help provide.

We assist refuge houses, and we work closely with the homeless as well. It just feels like the right thing to do.

The pandemic has especially highlighted how necessary it is for communities to pitch in for each other; we noticed that people were struggling with having laptops and other devices at home, so we started an appeal called Laptops For Learners.

We collected old or broken laptops, tablets and computers, got them refurbished and donated them out to families and people who needed them, all throughout Oxfordshire. Since December, we’ve refurbished and handed out over 300 laptops and devices already, and the demand is still huge so we will continue.

I’m currently studying for my nursing associate degree, as well as working as a Senior Nursing Assistant in a hospital. Any time I’m not working or studying, I’m organising for Secret Santa 365 – and when I’m on a shift, my parents or my partner pitch in to deal with emails and deliveries.

It’s a lot of work, but seeing how grateful people are for kindness pushes me forward and really makes the work worth it – and I’m reminded of my nan every step of the way.

Things get quite emotional when we deliver gifts, especially with the older people we meet. So happy, they often cry and are very thankful. I tend to get quite teary every time – my dad does, as well.

Since growing up around my nan, and spending time with her friends at her former care home, I have a real appreciation for the older generation.

It’s nice to just talk to them and hear what they have to say, get to know them and what they have done in their past. Nostalgia can be so healing for those who are lonely and feel isolated.

It’s expanded into a real community effort: some of the elderly people who we give gifts to have started a knitting club where they make hats for a local premature baby unit.

The knitters get to socialise and stay busy, but they are also doing something that will really help someone else in the community – everybody wins!

Sometimes I become so laser-focused on work for the charity that I don’t realise that there are people outside my bubble that might be watching. So it was completely surreal and unexpected to get an invitation to Harry and Meghan’s wedding through the post, in recognition of my charity work! To receive the invitation was so poignant to me, Nan was a real royalist, she would have loved the day.

I went with my mum, and arriving at Windsor Castle was a true ‘pinch me’ moment – it was a really beautiful day, with such a positive atmosphere, it felt like Nan was with us the whole time.

If that wasn’t a life changing day in itself, I was completely overwhelmed when I was awarded a BEM (British Empire Medal) in her majesty the Queen’s Birthday honours in 2019 and I will attend a Royal Garden Party once Covid restrictions allow.

I’m really proud of how far we have come, and I only hope the charity will continue to grow – not just in Didcot, but around the country. I’ve supported schools in London, Swindon and Manchester to get young people involved in their own Secret Santa 365 initiatives.

None of this would be possible without the continued support from the public and the dedication my team of volunteers make – it really is teamwork at its best.

Volunteering from such a young age has made me a better person as well as giving me skills, like organisation and networking, that will be a big help in my career. We always offer volunteering opportunities where we can, particularly for NCS (National Citizens Service) and Duke of Edinburgh participants.

If my nan was here to see this now, I know she’d be working right by my side, getting involved and helping the project go from strength to strength. I hope she would be proud.

As told to Nicole Vassell.

MORE: My community kitchen feeds over 15,000 people a week – poverty is closer than you think

MORE: In Focus: ‘It’s not just the elderly who’ve been abandoned in care homes’

Volunteers’ Week takes place 1-7 June and highlights the amazing ways people can give back and help others. To get involved click here.