The Liberal Party’s federal vice-president, Teena McQueen, said “I would kill to be sexually harassed at the moment” according to three senior Liberal women who joined her at a meeting to discuss the NSW branch’s new code of conduct.

And Ms McQueen, who says she did not make this exact comment, has apologised for an attempt at humour about herself.

Ms McQueen said she “made a throwaway line, that ‘when women reach my age, we don’t have to worry about being sexually assaulted’,” during the meeting. 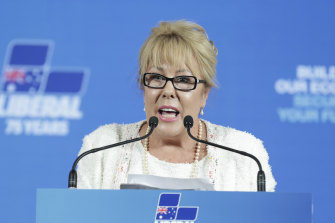 Teena McQueen, pictured at a Liberal Party federal council meeting in 2019, offended other party members with her remarks.Credit:Alex Ellinghausen

“It was an attempt at humour about myself. I regret making that off the cuff remark and apologise.”

But when told of Ms McQueen’s version, the three women were adamant she said “I would kill to be sexually harassed at the moment”.

Two of the attendees at the meeting also told The Sydney Morning Herald and The Age they heard Ms McQueen say “let’s talk about women not getting drunk at work” in comments that left other party officials stunned and outraged.

She added this was “absolutely no reference to anyone” though other people at the meeting understood it to be a reference to former Liberal staffer Brittany Higgins, who had recently come forward alleging she had been raped in Parliament House.

The revelation of Ms McQueen’s comments come as the Morrison government has been left reeling by Ms Higgins’ allegations, a historical rape claim against Attorney-General Christian Porter that he has vehemently denied, a video of emerging of a male staffer performing a solo sex act on a female MP’s desk and as backbench MP Andrew Laming announced he will quit at the next election because he took a photo of a woman’s bottom while her underwear was visible.

The meeting of senior female NSW Liberal Party officials was held on the afternoon of Friday, February 26, just hours before the NSW division’s state executive convened.

The executive voted later that evening to adopt a new code of conduct that makes clear the party has zero tolerance for bullying, sexual harassment, vilification, physical violence and discrimination.

Several formal complaints about Ms McQueen’s comments were made after the meeting to Mr Stone and these have been discussed with Liberal Party federal director Andrew Hirst.

When Ms McQueen’s specific comments were put to Mr Stone he did not deny she had made the comments.

Instead, a spokesman speaking on behalf of the federal and NSW Liberal parties said “the matters you’ve raised are internal matters for the party and we are unable to comment”.

Ms MacDonald had requested the meeting of women in the NSW branch’s executive in the days after Ms Higgins came forward to “come up with the beginnings of a cultural shift action plan”, according to an email sent by Ms MacDonald to the group on February 20 and seen by the Herald and The Age.

But according to several people who attended the meeting, Ms McQueen seemed determined to shut down the discussion about the proposed code of conduct.

“We were all left in shock, it was terrible, deplorable,” one of those participants, who asked not to be named, said.

“When we were talking about another aspect of the code she said ‘can’t we move on?’ and then she said ‘let’s talk about women not getting drunk at work’. A few of us have made complaints.” 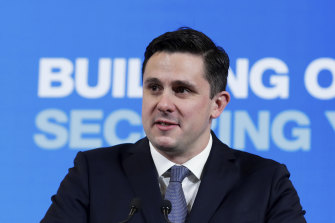 A second participant said other people in the meeting were “absolutely shocked, horrified, there aren’t enough words to describe how we felt”.

“I had gone in hoping it would be constructive but it was rail-roaded by those comments. Her views didn’t represent those of the other people in the room”.

The Sun-Herald and The Age reported the Liberal Party had issued a gag order on officials speaking publicly about party affairs, with only federal president John Olsen and federal director Andrew Hirst authorised to make statements about federal party matters in the lead up to the next federal election.

The order is widely understood to have Ms McQueen, an outspoken conservative member of the party, as its target.

But Ms McQueen is refusing to stay silent, continuing to appear on television and saying: “Do you think anyone could gag me?”

Less than two months before the 2019 election, Ms McQueen delivered what was widely regarded as a “trainwreck” performance on the ABC’s high-profile Q&A program.