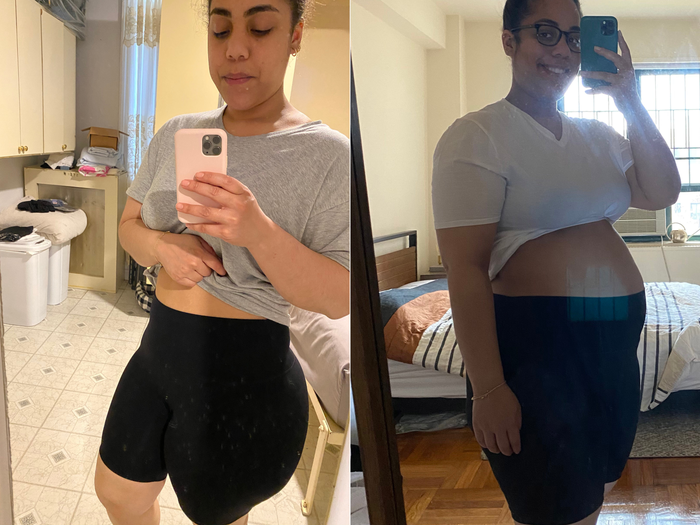 I wasn't always the biggest fan of bike shorts.

As a curvier woman, I tend to stay away from wearing shorts in general because I have bigger thighs and don't want to deal with chafing or having them ride up and constantly pulling them down throughout the day.

But after seeing the style rise in popularity — thanks to celebrities like Hailey Bieber (née Baldwin) and Kim Kardashian West — I decided to try my first pair of bike shorts in 2019.

I bought a $29 pair from Aerie (similar to a pair that's currently available for $20) and started to understand the hype. They were extremely soft and easy to wear around the house, but they constantly rode up my thighs.

I finally met my perfect match when I tried Everlane's $38 Perform Bike Shorts, which the brand released in June 2020.

The high-waisted shorts have been one of my stay-at-home wardrobe staples, and they've also become a maternity fashion favorite. I was wearing the Everlane shorts when I found out I was pregnant in June 2020, and seven months later, they haven't lost their magic. Here's why I can't stop wearing them.

Read more: I rented maternity clothes during my pregnancy using Motherhood Rental — here's what it was like, and what you should know before trying it

Everlane describes its nylon Perform Bike Shorts as having "an extra-high waist, minimal seams, an inside pocket, and lightweight compression with technical sweat-wicking properties."

At the time that I ordered the shorts, I had no idea that I was pregnant. My size was between 16 and 18, so I decided to order an XXL. I thought it was a better idea for them to fit a bit larger rather than to be too tight.

After I found out that I was expecting, I feared that I wouldn't be able to wear the bike shorts I had ordered — but thanks to the lightweight compression, I've been able to wear them every day throughout my pregnancy so far. I love that the shorts hug my figure without feeling constricting.

The shorts are so comfortable that on multiple occasions, I've forgotten that I've had them and gone to bed wearing them.

Unlike others that I've tried, Everlane's bike shorts don't ride up my thighs

To be honest, the only time I'm not wearing my Perform Bike Shorts is when I have to wash them. That's because they don't ride up my thighs or chafe while I'm walking, which is my biggest fear when it comes to trying out new styles of shorts.

The bike shorts are also super high-waisted, so I can wear them with a crop top or a sports bra without showing off my stomach. That's made them easy to pull on for a quick walk outside, or to feel put-together while lounging around the house or doing chores.

Plus, they have a pocket that's big enough to fit multiple credit cards, keys, headphones, or any small essentials I might need while out and about. When it's warmer outside, I wear these to take my dog on a walk two to three times a day.

Even after multiple washes, my Perform Bike Shorts feel as amazing as they did the first time I put them on. They're something I plan on wearing until I can't wear them anymore, even after I give birth. I might even buy a second pair.