Will Smith: movie star, action hero, husband to fellow superstar Jada and … deadbeat dad? If Smith’s recent Instagram post is anything to go by, the answer might be: yes.

Viewed by just under seven million people, it depicts an ordinary father on holiday with his daughters. The dad is being interviewed for a segment on Jimmy Kimmel’s late night talk show. With his kids present, he is asked a series of easy questions about them. 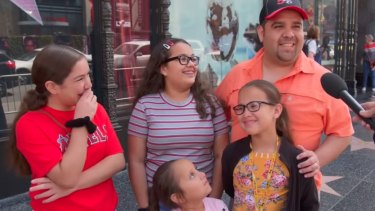 It included, “Can you name your kids’ teachers?" To which replies, “Of course I can not.”

“What are your daughter’s birthdays?” He responds “Why do you do this to me? I give up!”

At which point his own daughter has to gingerly point out she celebrated her birthday yesterday.

The mother then appears on camera and she knows all of it, including the names of her children’s dentist and doctor. Cut to the dad, looking ashamed of himself, betrayed by his own ignorance.

Kimmel teases him, the audience laughs, but nobody appears shocked or outraged, including Will Smith, who wrote in his caption, “Hahahah… This isn’t fair! I can’t answer any of those questions about my kids either!”

Smith is a father of three, and he’s busy – we get it. The ordinary dad is probably busy too. But imagine if it had been the mum who knew nothing about her kids? Imagine if Jada posted it to her Instagram, gleefully admitting she had no clue about her own children’s lives?

Chances are we’d be laughing a lot less.

This idea that women must be the domestic gatekeepers, unofficial managers of the mental load, and unpaid servant of the family unit or suffer harsh judgement has, in fact, just been scientifically proven.

In a study conducted by researchers at the University of Melbourne, a group of men and women were asked about a messy room, owned by either by a woman named “Jennifer” or a man named “John”. Participants were not told the room was clean or unclean, they were only asked how Jennifer or John might be perceived if their boss, or family, (including in-laws) or friends dropped by unexpectedly for a visit. The results, though unsurprising, were still disturbing.

“Women with a messy house are not just perceived as messy” says sociology lecturer Associate Professor Leah Ruppanner, who led the study. “People actually said that if someone drops in unexpectedly, people are going to see that woman as less human.”

Associate Professor Ruppanner, who has been researching gender norms around housework expectations for the better part of six years, reports that there were no such judgements made about men. In fact, though the men in the experiment could identify mess, they did not hold John to the same standard as Jennifer, even when the room wasn’t that messy – nobody did.

“This is why women clean," she says. “In case someone comes over.”

It’s also why couples have huge arguments about the mess or what it means. A generation ago it seemed inconceivable that a marriage would break up over who cleaned the toilet, but according to Ruppanner, women are now so sick of carrying out the bulk of domestic labour, they are ready to leave their husbands over it.

“And this is why it’s chewing up all those intellectual calories in the back of women’s heads. Women believe that living in a messy house makes them a worse person.”

And, according to societal standards, they are right.

We know that there’s a gender gap in housework after a woman has her first child. Survey after survey tells us things have remained largely static since the 1970s, despite gains for women in education and the workforce. But the prescription has always been to relax, and stop worrying about the housework. JK Rowling once said the only way she was able to write Harry Potter was by letting the house go to ruin. It was an almost feminist message: just do less.

It’s true, women are adopting this strategy, and our homes are getting messier, but, according to Associate Professor Ruppanner, it hasn’t translated into less stress.

“Women are still responsible for the mental load, which is why they report feeling overwhelmed, like too much is going on, this work/family balance doesn’t exist and they feel incredibly anxious … like they aren’t doing enough.”

So while that ordinary dad on Will Smith’s Instagram was probably able to enjoy a holiday with his daughters, blissfully unaware of the debris surrounding their lives, the working women with children watching probably saw something else – a mother who never gets a break.