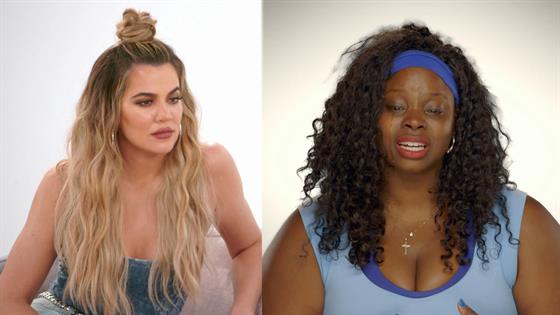 Khloe Kardashian knows a strong spirit when she sees one.

“So, you know how you can know that you need to move on from a relationship but you kind of let it linger on? That’s been me and food,” Kay Richae tells the host in this clip from Sunday’s new Revenge Body With Khloe Kardashian. And while the bright-eyed new participant admits the “love affair” began during childhood, she also explains why right now feels like high time for a break up.

When her infant son passed away soon after his birth, Kay Richae’s life took a trying turn. As the now-single mom of one (she’d given birth to a daughter several years earlier) relays to Khloe in the new clip, the loss—devastating as it was all on its own—quickly led to the conclusion of her marriage.

“My ex husband…not only did he not support me but he was against me. He blamed me,” she remembers. “Two weeks after we lost our baby, he wanted a divorce.”

“Oh my god. Like you don’t have enough going on,” says Khloe, before going on to commend her courage and lightness in the face of unimaginable heartache.

“You are so strong,” she tells Kay Richae, adding that “people would probably never imagine” what she’s been through, especially given how “joyful and radiant” she continues to be. And while the new Revenge Body trainee does admit things were “hard,” she’s also proud to say she’s managed “to create an amazing life” for herself and her daughter.

“Girl, and I was eating my ass off during the process!” she laughs.

Understandable, to say the least. Who else can’t wait to see this transformation?

Learn more about Kay Richae and her story in the clip above!

Watch a brand new episode of Revenge Body With Khloe Kardashian Sunday at 9 p.m., only on E!