“You either pivot or you close,” said celebrity chef Curtis Stone, summing up the reality of the restaurant industry in Los Angeles today.

As of Dec. 7, at least 110,000 restaurants have permanently closed in the U.S. due to the impact of the coronavirus pandemic, according to a study conducted by the National Restaurant Association. The network, founded in 1919 and representing over 500,000 restaurant businesses in the nation, reports that the industry lost $165 billion in revenue from March to July 2020. That number is now estimated to have reached close to $240 billion, with more than 3 million employees out of work.

In L.A., a growing list of restaurants have shut their doors for good because of the health crisis. After 16 years, Silver Lake’s go-to eatery Cliff’s Edge has permanently closed. British pub The Pikey, a local hangout with trivia nights that opened on Sunset Boulevard in 2012, has too. Patissier Dominique Ansel’s bakery, which had brought cronuts to L.A. at The Grove, is also gone, as is chef Ludo Lefebvre’s Michelin-starred Trois Mec — once the buzziest spot in the city.

Like most restaurateurs, Lefebvre turned to Instagram to share the news: “To say we are living in unprecedented times is an understatement. I realized back when social distancing guidelines were issued for the brief return to indoor dining that a restaurant with four tables and eight bar seats was just not going to work…COVID-19 has changed everything and there is still such an unknown period ahead of us. I had to accept the reality that it was time to let the idea of reopening Trois Mec go.”

The Year of Ox Capsules Collections

Lefebvre still runs Ludobab, specialized in wood-grilled kebabs, and the two locations of his brasserie, Petit Trois — though he has switched to offering takeout due to government restrictions.

It was on March 16 that the Los Angeles County Department of Public Health, led by Dr. Barbara Ferrer, issued an order for restaurants to offer takeout or drive-thru only, shortly before Gov. Gavin Newsom’s mandatory stay-at-home order on March 19.

During a Board of Supervisors meeting on May 12, Ferrer announced that the restriction would likely remain through the summer. But about two weeks later, L.A. Mayor Eric Garcetti announced that data from LACDPH showed the county had met the state’s criteria to open more businesses and allowed restaurants to reopen for indoor dining under new guidelines at 60 percent capacity. There was change again in July, however, when Newsom ordered the immediate closure of dine-in services at restaurants in L.A. on July 1, then closing them across the state on July 13. The green light had been given too soon, he announced.

Now, since 10 p.m. on Nov. 25, due to a surge of coronavirus cases across the state, outdoor dining in L.A. County has also been suspended amid a second stay-at-home order. Health-care workers and hospitals have been overwhelmed as the county sees a new high of hospitalizations, reaching 840,611 identified positive cases of COVID-19 and 11,071 deaths, as of Jan. 5 (according to LACDPH).

“Don’t make us scapegoats,” the National Restaurant Association told the National Governors Association in a public letter, noting the lack of scientific evidence linking restaurants to the increase of COVID-19 cases.

Twenty-twenty was a rollercoaster for restaurant owners. Among other factors, they’ve had to repurpose their spaces, invest in new furniture and equipment for outdoor seating, bounce between furloughing and rehiring staff due to the changing government guidelines, all while having to pay rent and with little to no aid through it all. Many owners have publicly said that the Paycheck Protection Program hasn’t been remotely sufficient, particularly since it puts restrictions on how establishments must spend the loan, which often doesn’t align with an owner’s needs. These days the industry is awaiting the possible benefits of the Restaurants Act, which would provide $120 billion to help independent restaurants and bars.

“You have to stay nimble and creative and figure out ways to get through it,” said Stone, calling from L.A. When the Australian-born chef isn’t on television, notably hosting Bravo’s “Top Chef Masters,” he runs two restaurants in the city: Michelin-starred Maude in Beverly Hills, and Gwen, a butcher shop and restaurant in Hollywood. To adapt, he transformed Gwen into a marketplace, offering customers fruits, vegetables and gourmet goods.

“We were noticing people were picking up a lot of charcuterie and asking about different cheeses,” he said. “It occurred to us that lots of people were going on picnics or picnicking in their own backyards.”

When outdoor dining was still an option, he partnered with The Grove to offer a pop-up, a gourmet picnic available on-site or to-go. Those who stayed sat socially distanced in the open-air of the shopping center’s lawn area, using baskets and blankets. 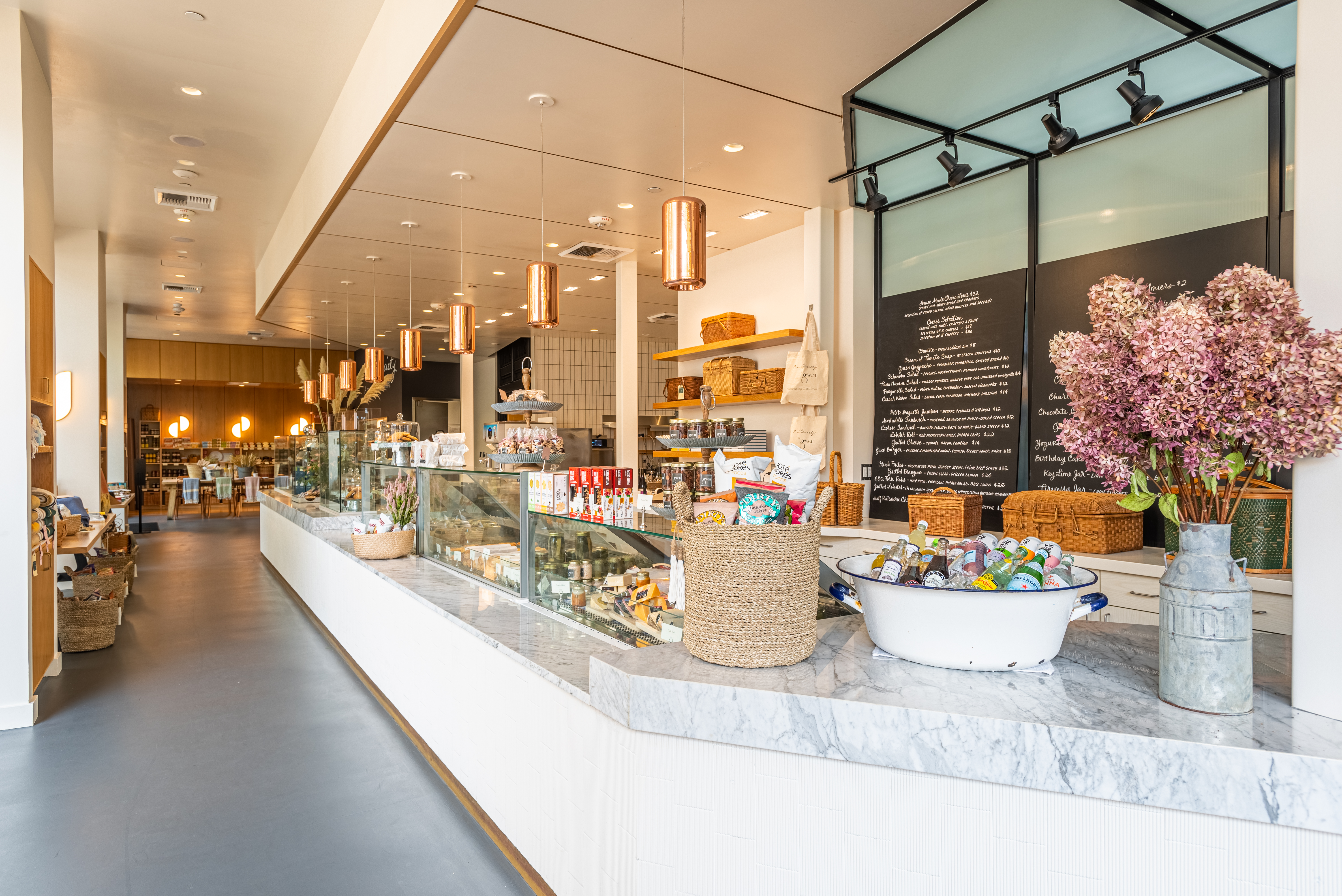 “As a restauranteur what you’re constantly trying to figure out is how you keep your team employed and safe and happy, all of life’s essentials,” continued Stone. “When outside dining was open, we were serving people outside. The second it closed, we said, ‘Alright, well, what do we do now?’”

He “ramped up” delivery services, restructured staff and bought a refrigerated van, he said. His focus now is on Gwentogo.com, where locals can pick up or get delivered a wide array of goods from local farms and suppliers. Along with ready-to-go picnic boxes starting at $48, Stone offers fresh produce and dairy, but also prepared comfort foods like chicken pot pie and barbecue ribs. There are also sandwiches, soups, salads, desserts (including yule logs), as well as seafood (lobster and oysters), caviar, white and black truffles, beer, wine and an online butcher shop with beef, pork, duck and chicken. Like many chefs, he’s been creating special menus for holidays, for Thanksgiving, Christmas and New Year’s Eve.

“Historically, these kinds of ingredients haven’t been made available to people,” he said. “It’s nice to be able to supply them…It’s how we’ve ducked and dived our way through [the pandemic]. It hasn’t been pretty. There’s been lots of hardships and people along the way, but that’s the restaurant industry right now. Without the support on the government level, then the restaurant business doesn’t have much of a future.”

The industry is “racking up a lot of debt,” he added. “Not to be too doom and gloomy on you, but it’s extremely challenging.”

He signed a Change.org petition outlining the needs the restaurant industry seeks from the government, alongside the likes of chefs Alice Waters of Berkeley’s Chez Panisse and Nancy Silverton of L.A.’s Osteria Mozza, Chi Spacca, Mozza2Go and Pizzeria Mozza.

“That’s the name of the game right now, reinventing, rethinking, reimagining, just putting everything in survival mode,” said Silverton over the phone. The L.A. native and creator of La Brea Bakery was diagnosed with COVID-19 in early 2020. She recovered as she prepared to open two new restaurants that fall, The Barish inside The Hollywood Roosevelt and Pizzette at Citizen Public Market in Culver City.

“Because nobody ever really had a time frame of how long this is going to last, it’s been difficult to make projections,” she said of navigating the times and managing her restaurants — now focused on takeout.

When outdoor dining was an option, L.A. chefs, owners and entrepreneurs were quick to adapt and offer new food experiences.

Silverton, for one, joined Stone and local chefs like Kris Yenbamroong of Night + Market and Jon Shook and Vinny Dotolo of Jon & Vinny’s to take part in a drive-thru event in October put together by Resy, the restaurant reservation platform. Costing $95 per person, cars lined up at The Hollywood Palladium parking lot to experience a 10-course meal from inside their vehicles. Each chef chose a song (that attendees could listen to on smartphones) to accompany his or her dish. Along with providing restaurant partners with an additional revenue stream, the event’s funds helped support José Andrés’ World Central Kitchen, a nonprofit that supplies meals to those in need during natural disasters.

Twenty-twenty has seen a rise in support of restaurant pop-ups and independent businesses in L.A. Spots like Adda, The Hangout — an eatery with a charitable element offering organic Indian dishes a few times a month out of Crafted Kitchen in the Arts District — and Nunchi by Lexie Park, a maker of eye-catching jelly cakes sold on Eatnunchi.com, have been utilizing Instagram to reach consumers. 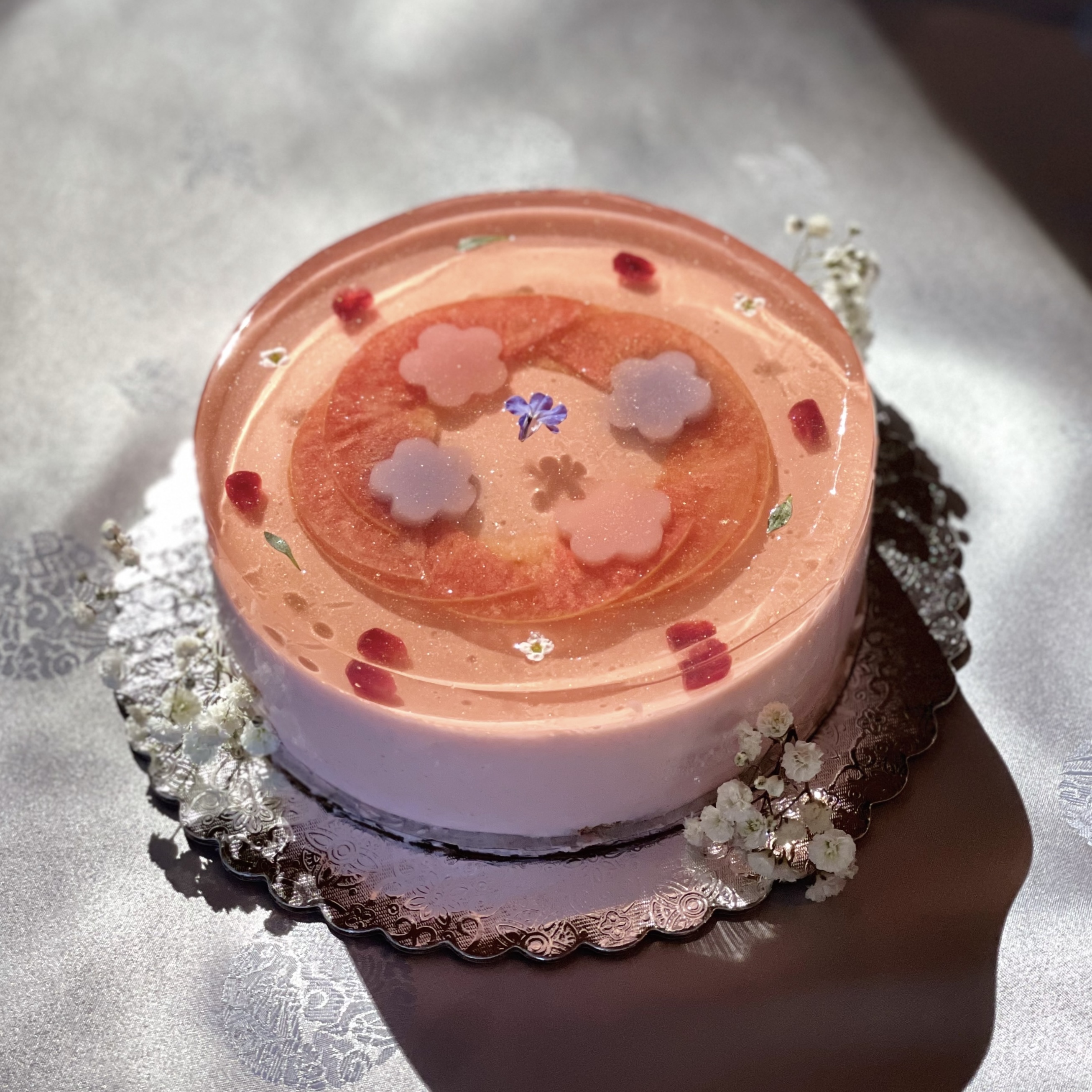 One of Lexie Park’s many colorful jelly cakes. Courtesy

Fleurs et Sel, a small business run by Lara Adekoya from her home in West Hollywood, experienced significant growth last year thanks to community support, she said. She stays in touch through Instagram at @Fleursetsel, where she shares her menu and photographs of her clients holding up their orders inside their cars. Before the new stay-at-home order, Adekoya hosted pop-ups at popular shopping destinations like Platform, The Grove and Palisades Village.

“People are looking for comfort,” she said.

Adekoya had to pivot after she was furloughed from her 9-to-5 sales job at Nordstrom in March and turned her passion for baking into a venture. She first shared the treats with friends, who requested more, and her business grew through the help of some high-profile Nordstrom clients who made large orders (like celebrity event planner Mindy Weiss), word of mouth and the use of Instagram as a marketing tool. She attributes her success to her creations — cookies in flavors like sea salt chocolate chip, vanilla bean sugar and cinnamon snickerdoodle (available at Fleursetsel.com) — and to her returning clients, but also to the movement of supporting Black-owned brands during Black Lives Matter.

“There was so much going on with the social-political climate, [with the killings of] Breonna Taylor, Ahmaud [Arbery],” she continued. “I think a lot of people were interested in supporting a small, Black-owned business for personal reasons, political reasons.” 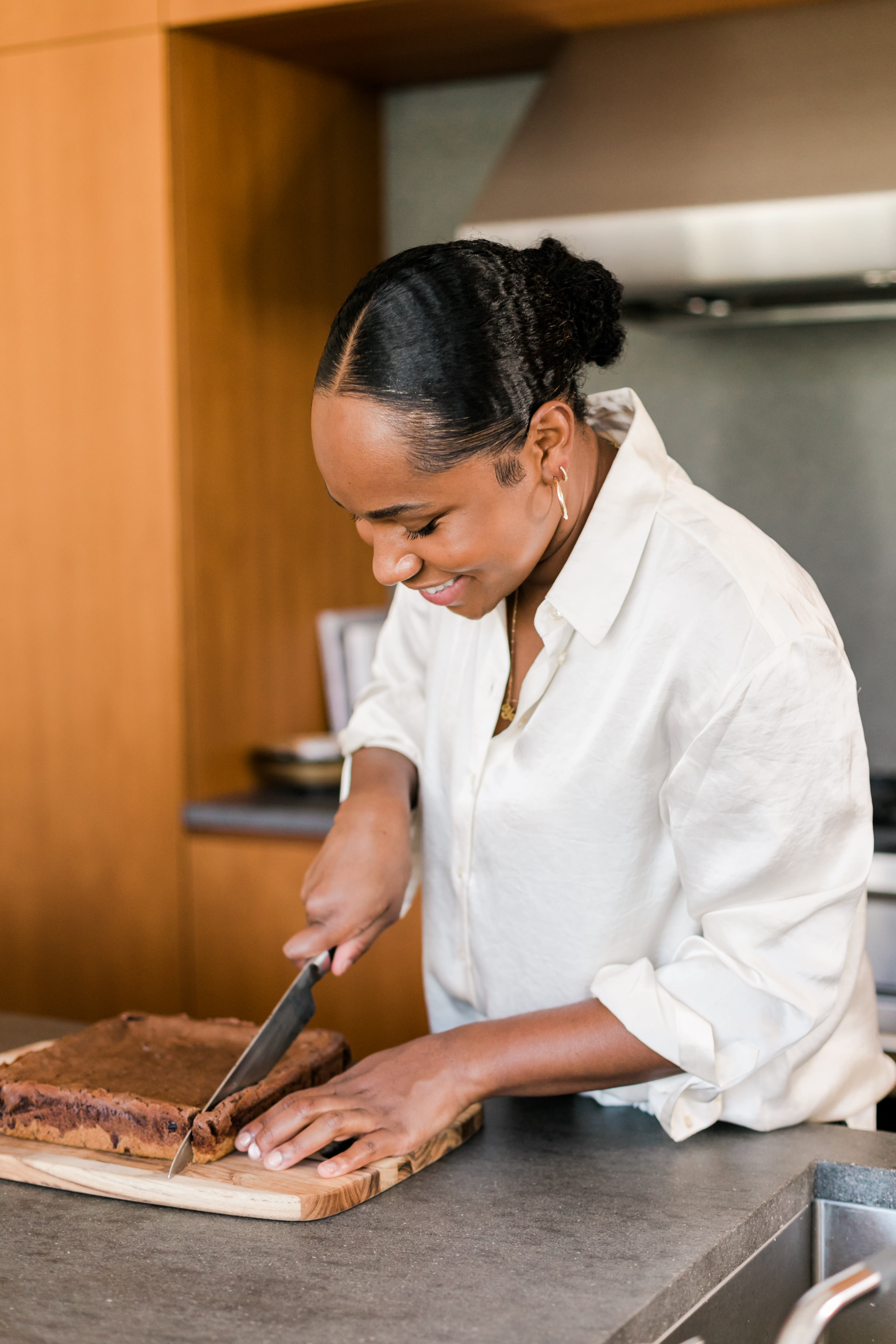 When demand was especially high over the summer, her family helped her with orders. Everything is made by Adekoya in small batches, which has its difficulties.

“I can’t say that I haven’t had my days where I felt defeated,” she admitted. Like the rest of the city, she’s navigating an unpredictable time. Her positive outlook and interactions with clients have helped her along the way, she said.

“With COVID-19, everyone has been having to combat challenges,” she added.

“Without a plan, you’re flying a little blind,” Stone said of the current climate. “I think what we did at some point was we stopped trying to guess what the future was going to bring, and we just started living for right now, started to make decisions based on what was in front of us.”