Newspapers across the globe pounced, this week, after the woman who inspired Sex and the City declared the series and its message wasn’t “very feminist at the end”.

So said Candace Bushnell – the author who wrote the column upon which the TV series was based – last weekend. 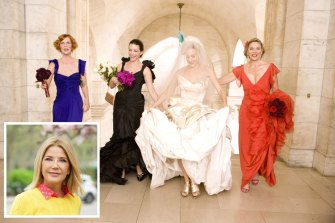 “That’s a very narrow and very old-fashioned understanding of feminism,” says Lauren Rosewarne of critics of Sex and the City, who slam the show for its fairytale ending. Credit:

“Finding a guy is maybe not your best economic choice in the long term,” Bushnell told The New York Post, referring to the series’ Disney princess finale, which saw the show’s anti-heroine, Carrie, ending up with Big, her arrogant and self-centred financier beau who was once memorably described as “a man practically woven out of red flags”.

“That idea of choosing to be coupled with a man that you love is not an un-feminist ending, if you’re heterosexual,” says Dr Lauren Rosewarne, a senior lecturer at the University of Melbourne and researcher in gender and pop culture. “That idea that you can’t do your own politics and still be in a committed relationship, I mean, that’s a very narrow and very old-fashioned understanding of feminism.”

The show, which ran from 1998 to 2004, did include “deep critiques of sort of capitalist heteronormative society, but they’re also in this candy-coloured sugar coated, easily digestible cupcake of a package,” says University of Newcastle’s Dr Jessica Ford. (She gives as an example the episode, “A Woman’s Right To Shoes”, in which Carrie’s $US485 Manolo Blahnik high heels are stolen from a friend’s baby shower, and our anti-heroine challenges the traditional values and cultural superiority of a woman who marries and reproduces.)

The show’s reboot And Just Like That… is unlikely to become more progressive and will therefore likely be lacking in cultural relevance, says Ford, who researches TV and feminism.

“They tend to be regressive, nostalgic and conservative in their politics, even when their intention is to be the opposite,” says Ford of reboots, noting this was the case with the second comings of Roseanne and Charmed. “I’m more interested in hearing new voices, I’m more interested in Michaela Coel’s new TV series, in Issa Rae and Phoebe Waller-Bridge,” she adds, referring to the creators of, respectively, I May Destroy You, Insecure, and Fleabag. “I think they’re the voices that are going to usher in the new generation of pop culture feminism, not [Sex and the City creators] Darren Star and Patrick Michael King.”

But do more “woke” shows than Sex and the City – which was famously lacking in cultural diversity and once belittled bi-sexuality as “just a lay over on the way to Gaytown” – still offer fairytale happy endings, with the main character coupling off?

It’s been a mixed bag in more recent shows.

The Mindy Project, for instance, ended with the main character, an obstetrician played by comedian Mindy Kaling, back with her on-and-off again beau, Danny, who once chided her, “You chose your job over us having a happy family.” But Fleabag, which ended in 2019, had a decidedly non-fairytale ending: the title character’s beau chose God over her, and she walked away at the end defiantly independent.

Rosewarne says Bushnell’s concern about women relying on men financially is not nearly as prevalent now as it once was. “That hasn’t been the case for most women, increasingly, since the 70s in Australia,” she says. “That idea of a woman living off a man in a Western country seems almost preposterous. You wouldn’t know many people who are in that position. They might be in that position temporarily when they’re raising children. But that idea that you get married at 22, that’s gone.”

Rosewarne adds there is good reason why many series feature couples ending up together.

“The popularity of that genre means the audience appetite is still there for it,” says Rosewarne. “That idea of the happy ending in Western culture, be it in literature, theatre, film, TV, has hundreds of years of giving us that story. So, we might want it to look a little updated, might want to see more diverse people, but the idea of wanting people to end up happy is a yearning that mirrors our own wants for ourselves. That’s not going to go away anytime soon.”