Google has been warned its threat to shut down search in Australia will not deter the Morrison government from its proposed media compensation laws, as the Prime Minister confirmed Microsoft was confident it could fill a gap in the market.

Communications Minister Paul Fletcher cast doubt over whether Google would follow through on its ultimatum and said the government intended to proceed with legislating its news media bargaining code. 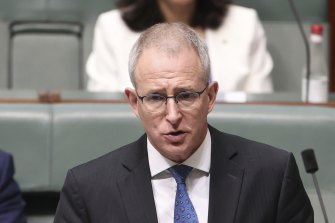 Communications Minister Paul Fletcher said Google’s threat to shut down search to Australian users could provide an opportunity for Microsoft to expand its operations.Credit: Alex Ellinghausen

“The mere fact a particular business says ‘we don’t like that, if you do that, we’ll exit the
market’ – we’re not going to be deterred by that,” Mr Fletcher told ABC TV on Monday.

Google has threatened to turn off its search engine in Australia if the proposed code becomes law, while Facebook has said it would be forced to remove news articles from its main app.

“What we can expect is if Google were to leave, and that’s a matter for them, we’re not encouraging that … if they were to leave there are other market participants. It will be an attractive market opportunity.”

Mr Morrison said Microsoft was “pretty confident” about its future in Australia as he defended the proposed code on Monday.

“We want to ensure that our laws keep pace so that the journalists can do their jobs, not just in taxpayer-funded organisations but commercial ones as well,” he said.

Bing accounts for 3.6 per cent of the market in Australia, compared with Google’s 94 per cent market share.

The escalating brinkmanship between the government and the tech giants came as a Senate economics committee held its second day of public hearings into the proposed code.

Treasury deputy secretary Meghan Quinn told the inquiry the government was undertaking modelling around the potential impact of a Google exit from the search market, but could not say whether it had a contingency plan in the event it did leave.

“There are ongoing discussions around the implications,” Ms Quinn said.

The proposed code, deemed “unworkable” by Google and Facebook, will force the tech giants into binding commercial agreements to compensate Australian news providers for the value news content brings to their platforms, or risk steep fines of up to 10 per cent of their annual revenues.

Media companies such as Nine Entertainment Co, owner of this masthead, and News Corp are urging the government to pass the laws, arguing they are critical to ensuring the long-term future of local journalism.

Both Google and Facebook maintain they are willing to pay for news but want to do so through their respective licensing initiatives, Google Showcase and Facebook News, which have not yet launched in Australia.They argue the code in its current form exposes them to an unknowable financial risk.

Solstice Media and Private Media chair Eric Beecher told the inquiry he supported the concept that Google and Facebook should pay for news content but said their concerns should be given greater consideration because the code would be “meaningless” if they left the market.

He said the tech giants were being asked to comply with legislation where they had “no idea how much money will be involved”.

Private Media-owned news website Crikey is one of seven outlets that has already signed deals with Google to license their content through Showcase.

Andrew Portelli, director of the Media, Entertainment and Arts Alliance, the union for journalists, told the inquiry that between 4000 and 5000 journalist jobs had been lost over the past decade due to financial pressures.

Greens senator Sarah Hanson-Young said the party would seek to amend the code to mandate that compensation brokered through its bargaining processes must be spent on public interest journalism.