‘My six-year-old son is a straight-up jerk’: Mother details her desperate struggle to cope with her ‘a**hole’ child, admitting he is a ‘bully’ with ‘no empathy’ – but internet users say SHE is to blame for ‘spoiling him’

A mother has opened up about her struggle to parent her six-year-old son in a desperate online post, admitting that the child is an ‘a**hole’ and a ‘bully’ who has ‘no empathy’.

The unnamed woman, who is based in the US, vented about her child in a lengthy piece for Medium, where she begged others for advice on how to handle her son – who she described as a ‘straight-up jerk’.

In her post, the frantic mother offered examples of her son’s worst behavior, revealing that he ‘breaks toys on purpose’, pokes fun at homeless people, is ‘mean’ to those around him – including adults – and has been ‘bullying’ other children. 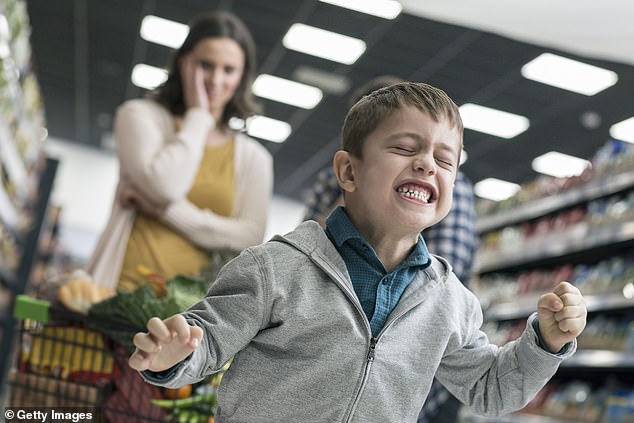 Upset: An American mother has vented about her six-year-old son in a desperate post online, revealing he is an ‘a**hole’ and a ‘jerk’ who bullies others (stock image)

‘He will break his toys on purpose and then expect us to buy him a new one,’ the woman – who explained that she is in a same-sex couple – wrote. ‘Even though we have told him if he breaks it on purpose, he can either use his tooth fairy money to buy a new one, or he won’t get one because we won’t replace it.’

The mom noted that her son is ‘brilliant for his age’ academically, but admitted that ‘it seems he doesn’t grasp common decency or empathy’, writing that he has been acting ‘rude’ and ‘bullying’ others for around two months now – with little explanation for his behavior.

‘He has been a straight-up jerk lately,’ she said. ‘He has been very rude/bullying type behavior for about 2 months now. He will say things for no reason other than just to be mean, it seems?

‘Like the other day, he made fun of his other mom’s appearance. He then said her outfit was ugly.’

Her son has also ‘been mean’ to other children that his parents have arranged playdates with – and even complained about one two-year-old to their parents, telling them that he ‘didn’t like the baby and didn’t want her to come over anymore’.

‘We were mortified,’ the mother recalled.

She admitted that she and her partner do lavish attention on their son, particularly because he is an only child, but insisted that they only do so ‘within reason’.

For example, between the months of August and December, their son does not get any ‘just because of gifts [or] surprises’, because his birthday is in September, and Christmas follows just a few months later. However they do tend to treat him to more presents between January and July as a reward for ‘super’ behavior.

The also said that she and her partner make every attempt to discipline their child, although she admitted that they don’t believe in ‘physical’ punishments, presumably referring to spanking.

Instead, she said the couple will take away their son’s toys, ban him from watching television, and explain to him why his behavior is not appropriate.

They have even attempted to teach their son how important it is to ‘help others out’ by taking him to give out goodie bags for homeless people – only for the six-year-old to make rude comments about them.

‘He will say stuff like, “They look gross they need a bath!” Or “Why do they get those granola bars and not me!”’ she wrote, adding that they have tried to read the toddler books about empathy and kindness, and have been closely monitoring everything that he watches on TV to ensure that he isn’t being exposed to anything potentially harmful.

However, she said that none their methods ‘seem to really affect him’, and she has been left at her wits end over how to address the situation – prompting her to turn to the internet in the hopes of getting some sage advice.

‘It feels like no matter what we do, he still acts like a jerk. He’s still rude and selfish. He doesn’t show empathy or anything close to it,’ she concluded.

‘We feel like we are failing him as parents! Can anyone help us!?’

Several Medium readers chimed in to offer advice – with many insisting that the youngster needs more ‘boundaries’ and discipline, while a few hit out at the mother, suggesting that she has ‘spoiled’ her son and therefore has only herself to blame for his behavior.

‘If a child is an a**hole it is what you let him be,’ one person commented, adding: ‘A kid will do anything you allow. So if he is an a**hole he learned it from you. He is spoiled period.’

Another person suggested that the writer get her child tested for Asperger syndrome, while pointing out that the six-year-old may be exhibiting particularly awful behavior as a result of his isolation from other kids during the pandemic.

‘I’m not trying to be funny, but have you considered having him checked for Asperger?’ the commenter wrote. ‘I feel for you… my kid had difficulties around that age. As he’s become a teenager and has had more friends, he’s become more social. He never broke toys and never gave trouble in school, however he wouldn’t be so pleasant to family and friends, no matter how much I yelled, told him it hurt peoples feelings or even spanked him.

‘It may either be that your son is spoiled, needs more social interaction with kids his age (which I know is extremely difficult right now) or it’s something deeper than that.’