Prime Minister Scott Morrison has backed a campaign by one of his handpicked candidates to ban transgender women from playing women’s sports and left open the possibility of legislating on the issue.

The Liberal candidate in Warringah Katherine Deves is the co-founder of the Save Women’s Sport organisation which pressures sporting organisations to ban trans women from female sports and create a separate category for them to participate in. 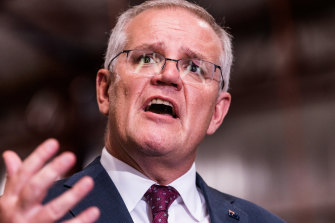 Tasmanian Liberal senator Claire Chandler introduced legislation to parliament in the heat of the debate of the religious discrimination bill that would make it easier for sporting organisations to exclude transgender women from competing in female sports.

At the time, Morrison said it was great legislation and he had encouraged Chandler to pursue the issue.

On Monday, he described both women as “outspoken and brave on these issues”

“I share their views. And I’ll have more to say about that at another time,” he said.

The government ultimately pulled its religious discrimination bill from parliament after five Liberal MPs crossed the floor to add protections for transgender students, and Liberal senator Andrew Bragg said he would do the same in the upper house.

Jacqueline Maley cuts through the noise of the federal election campaign with news, views and expert analysis. Sign up to our Australia Votes 2022 newsletter here.