Prime Minister Scott Morrison has defended his government's record on aged care after the Senate formally censured Aged Care Minister Richard Colbeck over his performance, with the support of every crossbencher.

Labor's leader in the Senate Penny Wong formally moved the motion on Thursday to censure Senator Colbeck for "failing to take responsibility for the devastating crisis in the aged care sector, which has caused death, grief and untold trauma for vulnerable Australians and their families". 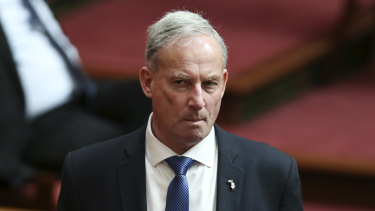 The censure motion against Aged Care Minister Richard Colbeck passed with the support of the entire crossbench.Credit:Alex Ellinghausen

"The neglect of older Australians has to stop," she told the Senate. "The country has lost confidence in this Minister. He has lost the confidence of the Parliament."

The government's leader in the Senate Mathias Cormann said the government "strongly" opposed the motion.

"We stand with our colleague, Senator Colbeck, who is doing a very good job in a very challenging area, in a very difficult context," Senator Cormann said.

Scott Morrison later came to the support of Senator Colbeck when asked by Opposition Leader Anthony Albanese in question time why he had not sacked the minister despite "horror stories of neglect in aged care".

The Prime Minister said the "many serious issues that require addressing in aged care", were the reason he had called the Aged Care Royal Commission.

"It is the very reason why the government, in particular, at the strong urging and recommendation of the Minister for Aged Care, has continued to increase funding for aged care by over a billion dollars every year," Mr Morrison said.

"It is the reason why the Minister for Aged Care came to the cabinet and said we needed to do more in aged care in response to the COVID-19 pandemic, and did so in … the plan that was first launched back in March."

Mr Morrison pointed to $1.5 billion in federal COVID-19 funding for the sector.

"The actions that have been put in place by the government has ensured that we have been able to mitigate what has been a terrible blow as a result of COVID-19 across this country, including in the aged care sector," he said.

The Senate also censured Senator Colbeck for "failing to recall the most basic and tragic facts about aged care residents", a reference to his struggle to recall how many aged care residents had died and been infected with COVID-19 at a committee hearing two weeks ago.

Senator Cormann said the minister had already apologised "for not having the numbers at his fingertips".

The motion stated Senator Colbeck had dismissed the hundreds of deaths in Victoria as a "function" of aged care and censured him for describing his management of aged care as a "high water mark".

Senator Wong said the minister "has been warned repeatedly" about the aged care sector's failure to provide adequate care to elderly Australians.

"Every three months since he became minister, the Aged Care Quality and Safety Commission has told him that standards were not met in as many as 45 per cent of site audits and 100 per cent of review audits," she said.

The censure motion passed with the support of the entire crossbench, 25-21. Scott Morrison later listed former politicians, who had been censured by the Senate – John Howard, Paul Keating, Gareth Evans and Graham Richardson – saying "that is not a new thing".

The Prime Minister told the Parliament the outbreak at the facility was "very, very concerning", adding: "To the families of those 10 Australians who passed away as a result of COVID-19, I extend my sincere condolences."

However, a leaked email from BaptCare Wyndham Lodge showed that at least 17 residents had died as of Monday.

A government spokesman said the discrepancy was due to out-of-date figures remaining on the Victorian Aged Care Response Centre's database.

The VACRC, a joint state-Commonwealth body set up to respond to the Victorian aged care outbreak, was last month tasked with centralised reporting on infections and deaths after concerns were raised about discrepancies between state and federal figures.