Nationals senators have called for Australia’s ban on nuclear power to be lifted so the technology can be explored as a clean energy source as the federal government faces increased pressure to set a deadline for net-zero emissions.

A Coalition-dominated parliamentary inquiry last year found the ban should be partially lifted but Energy and Emissions Reduction Minister Angus Taylor said at the time the government had no plans to alter the moratorium, which has been in place since 1998. 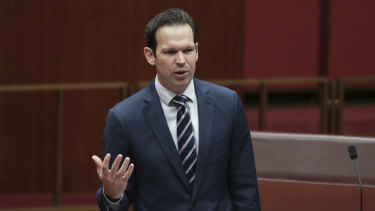 Nationals senator Matt Canavan says a prohibition on nuclear power should be lifted so the technology can be investigated. Credit:Alex Ellinghausen

Speaking on behalf of the Nationals Senate team on Tuesday, Queensland senator Matt Canavan said Australia’s “nonsensical prohibition” on nuclear power prevented investigation of the technology, which in time could become an economically viable source of emission-free power.

“If you want to lower emissions, if this is a crisis engulfing the world, why wouldn’t we use all technologies, all different options, to lower emissions and nuclear power is clearly a workable way of producing clean energy,” Senator Canavan said.

A government source said the Nationals senators had raised the issue in Tuesday’s joint party room meeting but there were no plans for a change of policy at this point.

Prime Minister Scott Morrison faces increasing pressure at home and abroad to sign up to a binding net-zero emissions deadline but has so far resisted calls. He said on Monday he would not form policies that required regional communities to “carry the burden for the country alone”.

Mr Morrison’s pledge comes as Nationals leader and Deputy Prime Minister Barnaby Joyce continues to withhold support for a net-zero deadline amid opposition within the junior Coalition partner over perceived economic risks to the farming and resources sector.

Senator Canavan, who has been a vocal supporter of public funding for new coal plants, conceded nuclear power was not currently commercially attractive but said the moratorium should be lifted so the technology could be developed.

The former resources minister disputed the findings of 234 scientists who oversaw the Intergovernmental Panel on Climate Change report released on Monday, saying reaching net-zero emissions “won’t change the environment” and an emissions-reduction commitment would expose Australia to economic risks posed by China.

“We’re not going to be able to trust China on any climate agreement. So if we sign up to a climate agreement, China will just take us for a ride again, take all our industry taking our jobs,” he said.

Senator Canavan said he supported public investment in “all power types” that provided dispatchable power – ready, reliable energy that can come from coal, gas, batteries or pumped hydro – and it should be considered for nuclear once the technology had been “stacked up”.

Tim Buckley, an analyst with the Institute for Energy Economics and Financial Analysis, said there was “no economic logic” to pursuing nuclear power, noting the only viable current technology came from China and Russia.

“The National party are pushing a technology that, if we look at Hinkley Point in the UK, involves a power price that is three to four times the price of renewables in Australia today,” he said. “The average development time of the Finnish, French and British for nuclear power plants is about 20 years.

“Do the Nats understand the only technology comes from China and Russia?”