Dave Chappelle’s new Netflix special, The Closer, has been criticised as transphobic, leading to calls for his cancellation – which is precisely what the comedian would want. 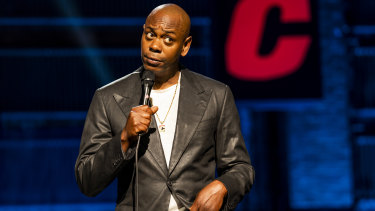 Now remind me, what kind of comedy Chappelle is famous for?
Stand-up.

But I just told you I was sitting down!
Urgh.

See, I can make jokes too.
Can you make them as well as Chappelle?

I suppose that depends on who you ask.
Yes, I suppose it does.

Right, let’s begin. Comedian offends people, gets cancelled. Is this some kind of 2021 headline generator?
It’s a little more complex than that. Chappelle has made a career off the back of searing social commentary packaged as stand-up comedy – and he’s also made a lot of money. In 2016, Netflix paid him $US60 million ($81 million) for three specials: The Age of Spin, Deep in the Heart of Texas and Equanimity. 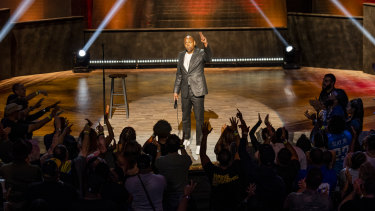 Chappelle has come under fire for controversial jokes about the trans community.Credit:Mathieu Bitton / Netflix

Laughing all the way to the bank, am I right?
Please stop.

Go on.
Each of those specials was peppered with Chappelle doing what he does best: riffing on race, making people uncomfortable and exposing unconscious bias.

So far, so good.
But in between his masterstrokes, Chappelle seemed particularly interested in the trans community, using pejorative terms in his sets and joking about trans athletes. In the Sticks & Stones special, Chappelle included a whole bit on LeBron James changing his gender to join the Women’s National Basketball Association “where he will score 840 points a game”.

Playing devil’s advocate for a second – if Chappelle has a track record of these types of jokes, why are people angry now?
Well, Chappelle’s latest (and final) special for Netflix, The Closer, sees him return to trans-related subjects, dedicating much of the set to exploring anger among members of the community, and in his opinion, their “unjustified” criticism.

Hit me with some of the lowlights?
He declares himself “Team TERF”, referencing the term for “trans-exclusionary radical feminist”, before going in to bat for J.K. Rowling, who has also been criticised for her views on gender identity. “They cancelled J.K. Rowling – my God,” jokes Chappelle in The Closer.

I never thought I’d hear J.K. Rowling and Dave Chappelle mentioned in the same sentence.
Do you want to make a Potter gag?

Is there something in Harry Potter and the Half-Baked Jokes?
I don’t think so.

Continue.
Chappelle has made a point of misgendering trans women, joking about their altered genitalia or poking fun at North Carolina’s controversial “bathroom bill”, a 2016 law that criminalised the act of a transgender individual entering a restroom for the gender they identified with.

The special ends with Chappelle discussing Daphne Dorman, a late trans comic who Chappelle befriended. Dorman passed away in 2019, and Chappelle set up a trust fund for Dorman’s daughter. During the final joke of The Closer, Chappelle riffs on what he might say to Dorman’s daughter when she turns 21 and can access the trust. “Young lady, I knew your father, and he was a wonderful woman.”

Really going out with a bang. What has been the response?
You can imagine, the internet loves nothing more than pitting the Wokers against the Jokers. At the ends of the arguments are those who defend a comedian’s right to offend everyone and anyone, and those who are, allegedly, easily offended.

Has Netflix made any comment on the backlash?
Indeed. Following a wave of rebukes, Netflix co-chief executive Ted Sarandos sent out an internal memo addressing staff members about the decision not to withdraw the content from the Netflix library.

“Several of you have also asked where we draw the line on hate. We don’t allow Netflix titles that are designed to incite hate or violence, and we don’t believe The Closer crosses that line,” read the Sarandos statement.

Don’t cross the line, but do sit on the fence.
Exactly. Things took an interesting turn when three Netflix employees, including transgender software engineer Terra Field, crashed the company’s quarterly business review this week to protest the decision. Following that, the staff members were suspended.

I hate to use this word, but the #optics of that are…
So bad.

Has anyone else spoken out against Chappelle?
Yep. GLAAD, an organisation founded to push back against defamatory coverage of the LGBTQI+ community, has called out Netflix for their double standards.

Chappelle talks for a living; he must’ve had something to say?
Naturally. Chappelle played a sold-out gig last Thursday night at LA’s iconic Hollywood Bowl, and he opened with this line: “If this is what being cancelled is like, I love it.”

The declaration was met with a standing ovation by the crowd, which included Brad Pitt.

Zomg. Do we have to cancel Brad Pitt too?
Never.

So, what now?
Well, chances are this cancellation will be cancelled. Chappelle remains one of the all-time stand-up comedy greats, and his die-hard fans will continue to support him no matter how “edgy” his material becomes.