Mr Morrison has also left the door open for mandating COVID-19 vaccines for aged care employees. Those workers are among the first targeted groups scheduled to start receiving vaccinations in the second half of February. 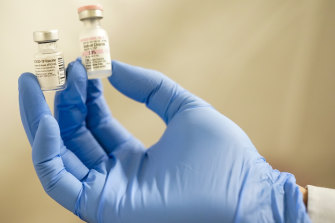 Prime Minister Scott Morrison said the start date of the planned rollout could change depending on Pfizer’s supply.Credit:AP

But the planned start of the rollout is pending a late January approval of the Pfizer vaccine by the Therapeutic Goods Administration, as well as any potential changes to Pfizer's production schedule.

Mr Morrison reiterated the plan to begin vaccinating those priority groups by mid to late February, but said it could be subject to change.

“We’ve set out indicative timeframes when we would hope to commence, in mid to late-February, but that will obviously change and be subject to any impacts on production schedules overseas,” he said on Friday.

On Thursday, Health Minister Greg Hunt said he had received assurances from Pfizer there was no change to the plan for deliveries to begin in the second half of February.

Potential supply chain or production issues were some of the reasons Australia had invested so heavily in the AstraZeneca vaccine, of which about 50 million doses will be made onshore.

“One of the reasons that we saw and paid a premium for ensuring that we could produce the AstraZeneca vaccine here in Australia was to ensure that particularly over the course of the year we would not be as exposed to the vulnerabilities of those supply chains,” Mr Morrison said.

The AstraZeneca vaccine will be used for the majority of Australians wanting to get vaccinated, but the first crucial phase targeting groups including healthcare workers, aged care workers and elderly aged care residents will involve the Pfizer vaccine.

Mr Morrison has spoken to some European prime ministers as Pfizer this week halved some vaccine deliveries to countries including Romania and Poland.

"There is no doubt … there are some difficulties that they're encountering, and so we're watching that very closely," he said.

Mr Morrison said Australia was planning to start at a small scale with the vaccine rollout, and noted Pfizer was upgrading their production capacity in Europe.

"There are a huge demands across Europe from other clients, so we'll just continue to work through that and we'll update the Australian people as we have information available to us."

Ahead of the vaccine rollout, Mr Morrison said the Australian Health Protection Principal Committee was not at this stage recommending making vaccines mandatory for aged care workers, but said that position could change in the future if necessary.

“We’ll take this step by step. I have no doubt if there were concerns about the wellbeing of vulnerable Australians, particularly elderly Australians, then they would make such a recommendation,” he said.

Deputy Chief Medical Officer Professor Michael Kidd said they were encouraging all aged care residents and staff in those facilities to get the COVID-19 vaccine when it’s rolled out in their area.

“We’re anticipating a very high uptake amongst both residents and staff in order to protect the residents from COVID-19,” Professor Kidd said.

“At this point we’re not looking at a recommendation of mandatory vaccination.”