On New Year’s Day last year, Melinda Gates told her Instagram followers that her heart was full as she ‘celebrated’ her long marriage to Bill, wishing a happy anniversary to ‘the man who keeps me dancing through life’.

What a shock it was, then, when we heard this multi-billionaire couple are divorcing after 27 supposedly happy years together.

Now Melinda says her marriage is ‘irretrievably broken’, and the dancing has stopped.

In a pandemic that has sent divorce rates soaring, especially among older couples, the marital travails of this privileged pair struck a sad chord with many.

If the Gateses, with their unimaginable advantages, can’t make it work, who can? 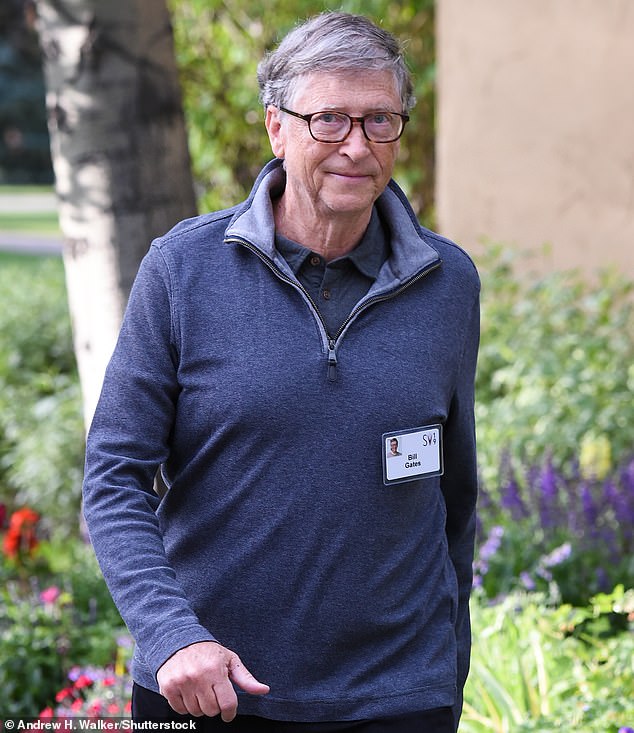 Members of the family are said to be ‘furious’ with Bill (pictured). Daughter Jennifer, 25, has admitted they’ve all suffered a ‘challenging stretch of time’

Despite the honeyed words of the carefully crafted statement the couple released, their separation was reportedly ‘not friendly’.

Members of the family are said to be ‘furious’ with Bill. Daughter Jennifer, 25, has admitted they’ve all suffered a ‘challenging stretch of time’.

By the time they met, Bill was already the world’s youngest billionaire and the boss of one of the world’s fastest-growing companies. Melinda was a humble product manager.

That imbalance seemed to change when together they set up the Bill & Melinda Gates Foundation, pouring billions into Third World countries to combat poverty and disease.

Finally, it seemed, Melinda had an equal role: he providing the brains and the energy, she the compassion. And yet to be honest, this partnership was never truly equal. History will remember Bill as one of the great tycoons of all time, she as his wife.

The warning signs of Bill’s odd behaviour came early when, aged 38 and contemplating marriage, he clinically weighed up the pros and cons of their union on a whiteboard. 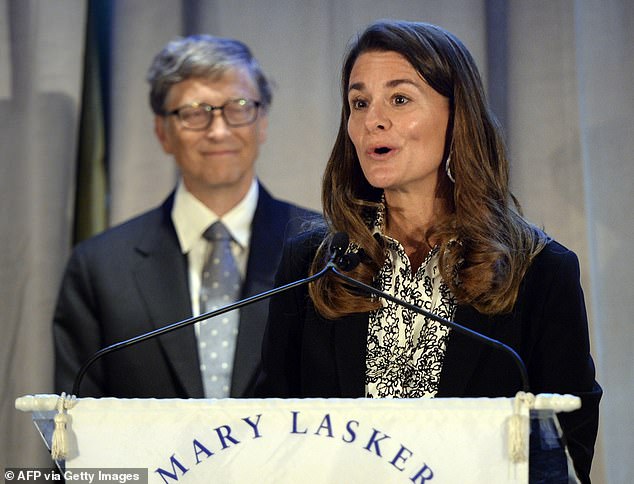 Bill and Melinda Gates receive the Lasker Award September 20, 2013. Now Melinda says her marriage is ‘irretrievably broken’, and the dancing has stopped 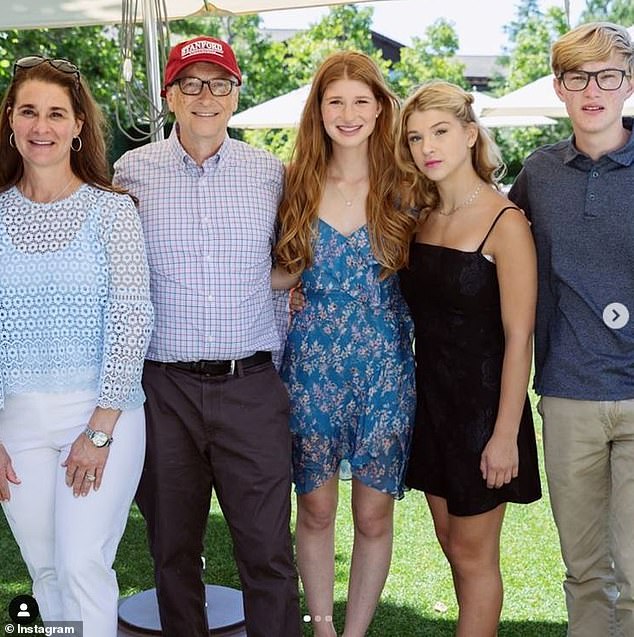 The warning signs of Bill’s odd behaviour came early when, aged 38 and contemplating marriage, he clinically weighed up the pros and cons of their union on a whiteboard. Pictured, the couple with their three children

Yet marry they did and raised three children, Bill aghast when Melinda decided to quit her job to care for their kids, while he worked 16 hours a day.

No one knows what goes on inside any marriage, least of all one stuffed with bodyguards, jets, staff, houses and cars: where privacy is the rarest commodity, where wealth brings everything you could wish for but also intrudes on every aspect of your life.

But perhaps there is a clue. Bill named the vast estate he built in Washington ‘Xanadu 2.0’ after the sprawling residence of Charles Foster Kane in the 1941 film Citizen Kane, a tycoon of similarly immense means (based on Press baron William Randolph Hearst), but who was miserable with it.

Meanwhile, when Bill and Melinda were courting, they bonded over F. Scott Fitzgerald’s tragic novel The Great Gatsby. Two artistic classics of the 20th century. And what do they have in common?

They both tell of the strange emptiness at the heart of the lives of very rich people, and how, in the end, all that money can bring pomp, but not pleasure — and luxury, but not love.

Desperate ex-Catwoman Halle Berry, 54, releases pictures of herself wearing an eye-wateringly skin-tight leopard-print body suit — with matching boots — and declares with a feline snarl: ‘One of the benefits of ageing is you start not to give a f*** any more.’

No surprises that after Halle’s comet of a career burned itself out, she is forced to court attention in other ways. 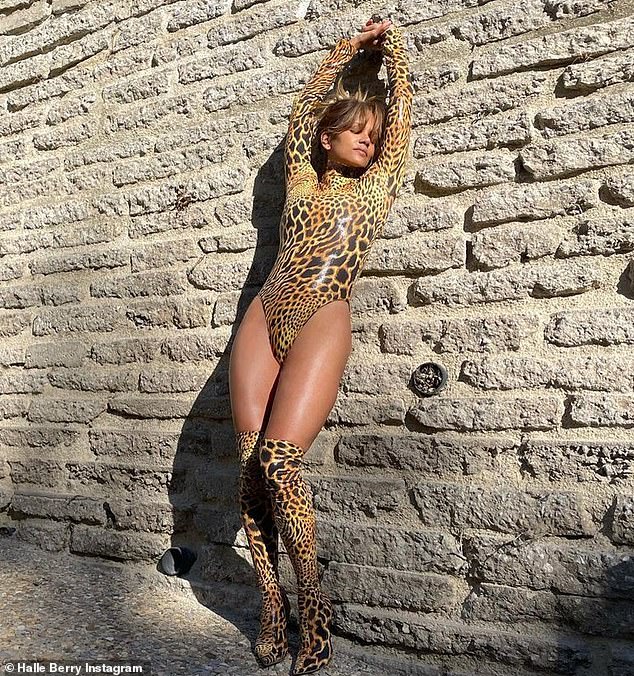 Cash and Gary! The BBC doles out dosh

HMRC, we learn, is pursuing Gary Lineker for a near-£5 million tax bill it claims the footie pundit owes.

He has been in dispute with the taxman for a year, accused of being a ‘disguised employee’ to minimise — legally, but controversially — his income tax and national insurance by paying himself through a company.

Gary disputes the amount and insists he has done nothing wrong.

All this as we learn Graham Norton pockets almost £4 million, much of it paid by us.

Whatever their tax arrangements, the amount paid to these two stars and so many others by the BBC is frankly obscene — especially when the Corporation is at the same time snatching free licences from its older viewers.

Meanwhile, we are switching off in droves. Adults are watching far less on the BBC than they were a decade ago, and around 450,000 under-75s have tuned out altogether.

To use a metaphor Gary would understand, it’s time to blow the full-time whistle on the licence fee.

Marvellous news that Sir Michael Hintze has given £100,000 to the Mail’s Remember Me campaign for a national memorial to the Covid dead in St Paul’s Cathedral.

And I do remember him, having once sat next to this charismatic philanthropist during a gala fundraiser when he lent me his (gorgeous) jacket as I had to take a call outside in the cold.

A true gentleman, sparkling eyes, a wonderful wit — and, as I discovered later, alas also a happily married father-of-four.

New Zealand’s elite female weightlifters have been told to ‘be quiet’ about their concerns over transgender athlete Laurel Hubbard competing at the Tokyo Olympics this summer.

With respect to the transgender community, you have to look hard for trans men — who were born female — taking on other chaps for Olympic gold.

Good news that both parents of the bride and groom will now be named on marriage certificates, but bad news that newlywed couples will no longer receive hand-written wedding certificates and instead be sent a version online.

Where’s the fun in that? When it all goes wrong, you can’t tear up an email and throw it in his or her face.

The couple’s daughter is due in a few weeks, but I doubt there will be a sequel. Meghan is perhaps not the best person to write about the special love between fathers and daughters, given that she isn’t on speakers with her own dear poorly dad. I doubt even Oprah would swallow that one.

Harry and Megs made a lot of noise about their stifling life as royals. But the truth is no one would be interested in them without the titles they still tout around.

Meghan makes sure to use hers on her new children’s book. The decent thing would be to relinquish their titles altogether, rather than exploiting them.

A triumph for Tess

How bravely honest of the plus-size model Tess Holliday to announce to her 2.1 million Instagram followers that, despite looking fulsomely fabulous on the cover of Cosmopolitan, she is ‘not ashamed’ to have previously suffered from anorexia.

Declaring herself ‘finally free’ from that cruel illness, Tess is now a bouncy size 22. Whatever treatment she used, I’m glad it’s worked. 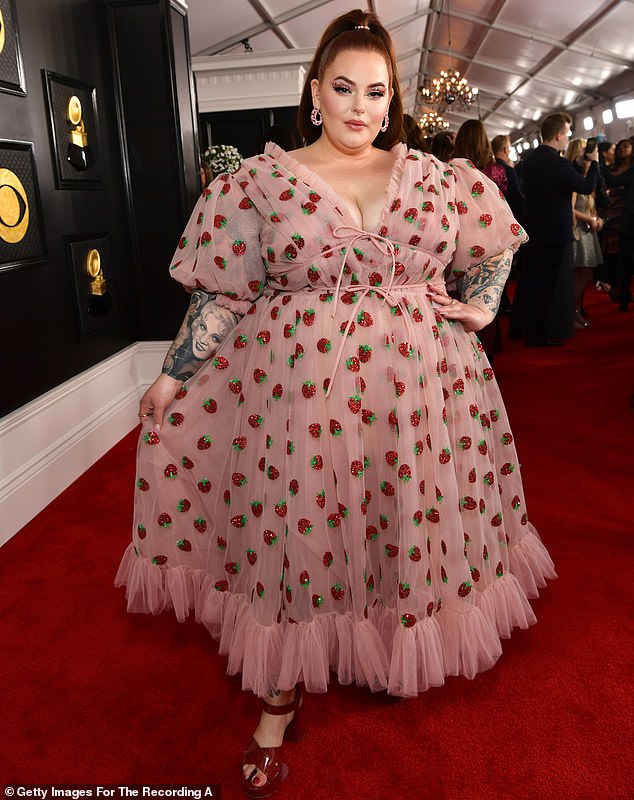 How bravely honest of the plus-size model Tess Holliday (pictured) to announce to her 2.1 million Instagram followers that, despite looking fulsomely fabulous on the cover of Cosmopolitan, she is ‘not ashamed’ to have previously suffered from anorexia