Architects were encouraged to consider the demolition of a historic Victorian building in order to make way for Parramatta's new Powerhouse Museum, despite the NSW Premier’s assurance in 2019 that efforts would be made to try and save local heritage.

The Stage 2 design brief, released to the public on Monday and prepared by Create NSW, did not push for the retention of the 1886 Italianate villa known as Willow Grove, and instead urged designers to consider its removal "should it be required". 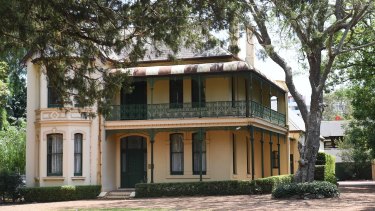 Willow Grove is one of two heritage properties that will be bulldozed to make way for the new museum. Credit:Nick Moir

"To enable the best museum outcome and support the Civic Link we are requesting that all submissions consider the removal of Willow Grove, should it be required," the brief read.

In mid-2019 the brief was provided to the six architect teams shortlisted in the International Design Competition, to guide them as they developed concept plans for the museum.

Earlier this month, NSW Premier Gladys Berejiklian said in Parliament, "In the tender documents every organisation that showed an interest in building the Powerhouse Museum was asked, on behalf of the citizens, to consider protecting Willow Grove".

"Our intention always was that if we could save that historic house we would."

The International Jury was unanimous in its decision on the chosen concept, designed by Moreau Kusunoki. The winning architects did not opt to retain Willow Grove and a row of Victorian terraces, known as St. George's Terrace, nearby.

"The documents show that Premier Gladys Berejiklian and her government never intended to protect Willow Grove – and engaged in a cruel hoax on the community," Labor's Walt Secord said.

But a spokeswoman for the Premier denied Mr Secord's claims and said Labor was being mischievous, and that all finalists were asked to consider heritage aspects and be "sympathetic to the local heritage site".

"The Premier has made this clear on several occasions – including in Parliament," she said. "The design brief also allowed for the removal of the heritage buildings, should it be required. The submitted concept designs made clear that it is not possible to deliver on the design ambitions of the brief and deliver city connectivity while retaining Willow Grove and St George's Terrace." 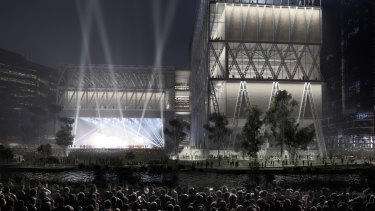 The broad principles of the brief, prepared on behalf of Create NSW, show much attention was paid to the museum's integration into the cultural fabric of Parramatta, and its orientation to the riverfront.

Planners referred to the museum as being "fine grain" in its structure, meaning it would be made up of multiple smaller elements rather than one large block. According to the plans, there will be multiple entries, with no single front door, multiple places to stop, soft edges and no harsh lights. It will be open until late in the night and have intimate retail offerings, while also being a working precinct.

A minimum 18,000 square metres of exhibition and public spaces was specified, configured across six column-free exhibition spaces. Three of these were commissioned without museum standard environmental controls.

In addition, architects were asked to incorporate 40 studio and one-bedroom apartments for overnight students and visiting researchers, a digital studio and staff offices for 200, plus 1600 square metres for shops and cafes.

Priority was given to connecting the Powerhouse Museum with Parramatta's "Eat Street" and orienting cultural activities such as weekly food markets, live performance and festivals to the riverfront. A new pedestrian zone running from east to west across the site, from Lennox Bridge to Wilde Avenue, was envisaged for cycling and walking.

There is to be a 25-metre setback from the river to allow for landscaped public space including an outdoor cinema and the use of paddle boats and kayaks. The site's landmark trees are to be replaced by a new grove of trees providing shade.

The architects were asked to respect the cultural and heritage significance of the site, surrounds and the museum's priceless collection, and embed interpretations of the site's rich history into the design – including any significant archaeological items recovered as a result of excavation work.