‘The Real’s Jeannie Mai Jenkins dishes on the baby she’s expecting with husband Jeezy as she launches her new Jeannie X INC line!

Talk show co-host and Macy’s fashion designer Jeannie Mai Jenkins, 42, is getting ready to welcome her first child with rapper Jeezy, 44, but she has some fears about the delivery room! “Tearing my vagina!” is what Jeannie said she’s most scared of while talking to HollywoodLife EXCLUSIVELY during an episode of TVTalk on Instagram Live. “[I’m scared of] making my perfect little taco [tear] from the floor up! I’m asking everybody what they think between C-section and [vaginal].”

Jeannie and her rapper husband met while she was working on the set of her talk show The Real. They began dating on the DL in 2018 after keeping in touch. But by 2019, they stepped out publicly and were taking photos together on the red carpet, as well as social media. The couple became engaged in April 2020, married March of 2021 and Jeannie announced her pregnancy news in a full circle moment on TV — where it all began — during the show’s season premiere in Sept. 2021.

One thing Jeannie isn’t down for that day is pain as she said she is signing up for an epidural no matter what as she decides which way to deliver! “I do want an epidural and believe in pain relief,” Jeanie admitted. “I’ve heard things on both sides. I don’t know which is better. I’m excited. I’m really excited about it but I want to choose the best path because I’m so scared of tearing. That’s the one thing I’ve heard is so painful. I want to walk around. I don’t want to be stuck sitting there because it’s such an intense surgery. I don’t know!”

Jeezy, who already has one son and one daughter from a previous relationship, is a pro and doting on his wife. “He’s great!” Jeanie said. “I would have to say, I’m shocked. He’s a father of 2 already so he knows this well. He’s funny. He makes me laugh which is so important and he knows how to be caring. Just the other day he was sitting there just rubbing coco butter on my belly. Just having your man ride this out with you is all we need. He really is so good at that. The baby is actually due on my birthday, January 4th. I’m like, “Baby, come out January 4th because I’m down for a double birthday.” 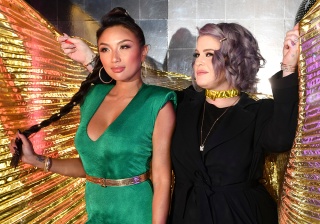 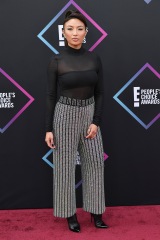 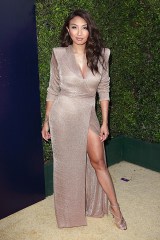 A double birthday right after the holidays and a successful clothing line launch is more than Jeanie could’ve hoped for right now as several of her pieces are already sold out. The line, which includes petite and plus size, offers a wide variety of designs such as dresses and coats and is completely affordable. “I’m really thankful to have such a variety of beautiful people of different lifestyles and cultures in my group of friends,” she said of the campaign which included some of her pals. “We had trans models, we had plus sized we had Muslim models, we had men. I think it was so important to show that beauty comes in all sorts of shapes and sizes.”