A group of protesters carrying signs against President Joe Biden and police marched in Portland on Inauguration Day and damaged the headquarters of the Democratic Party of Oregon, police said. Some in the group of about 150 people smashed windows and spray-painted anarchist symbols at the political party building.

Some demonstrators carried a sign reading, “We don’t want Biden, we want revenge!” in response to “police murders” and “imperialist wars.” Others carried a banner declaring “We Are Ungovernable.”

Police said on Twitter that officers on bicycles had entered the crowd to contact someone with a weapon and to remove poles affixed to a banner that they thought could be used as a weapon.

Police said the crowd swarmed the officers and threw objects at authorities, who used a smoke canister to get away.

The group was one of several that gathered in the city on Inauguration Day, police said. KOIN reported a group of about 200 people gathered at Caruthers Park Wednesday night near a U.S. Immigrations and Customs Enforcement (ICE) facility — a location targeted by violent groups throughout much of 2020. 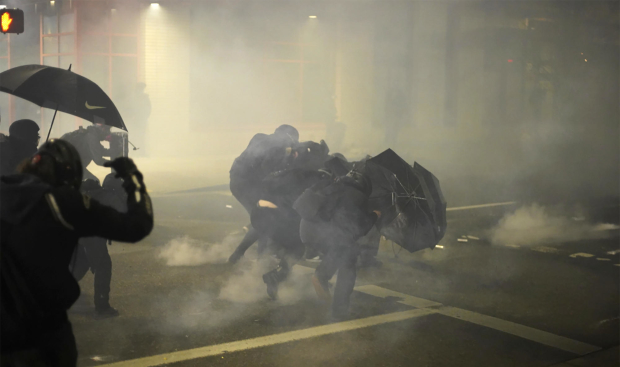 Police announced a short time later that some people were seen damaging the building, including throwing rocks and eggs, and others were seen carrying pepperball guns, Taser-like weapons, shields and rocks.

A KOIN-TV news crew witnessed what appeared to be tear gas, as well as stun grenades and less-lethal munitions like pepperballs. Several people appeared to be taken into custody.

In videos posted to Twitter,  people are seen yelling and approaching federal officers who are dressed in riot gear. The video shows the officers deploying what sounds like pepper bullets and canisters of tear gas.

Portland has been the site of frequent protests, many involving violent clashes between officers and demonstrators, ever since the police killing of George Floyd in Minneapolis in May. Over the summer, there were demonstrations for more than 100 straight days.

Mayor Ted Wheeler has decried what he described as a segment of violent agitators who detract from the message of police accountability and should be subject to more severe punishment.

A group of about 100 people also marched in Seattle on Wednesday, where police said windows were broken at a federal courthouse and officers arrested three people. The crowd called for the abolition of ICE and, outside the federal immigration court, several people set fire to an American flag, The Seattle Times reported.