Berin Mackenzie is used to hauling heavy loads, lugging 30-kilogram packs up and down remote canyons, with a 10-kilogram bucket in his free hand and the other gripping a taut rope.

But his burden hasn’t merely been a physical one for the last few years.

The threatened species ecologist has been toiling on a project known only to a few close colleagues. In the process, interrupted by the Black Saturday bushfires, Mackenzie and his team have added to the storied efforts to preserve the Wollemi pine. 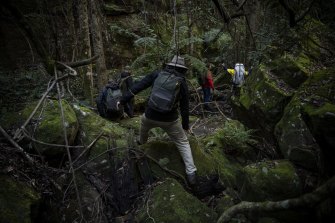 The group have been out scouting suitable new locations, deep within the Wollemi wilderness north-west of Sydney, to replant the so-called “dinosaur trees” to increase their chances of surviving in the wild.

“We’ve had to train ourselves to basically lie [out of] a sense of duty of protection,” the deceptively slight 45-year old tells the Herald and The Age. “We’re fiercely protective of the sites because we know how much effort goes into it and how easy it is to undo all of that effort.”

Their work is extraordinary, and yet in keeping with the combination of daring adventure and frontier science that has inspired a global fascination in the pines since their discovery in a remote ravine deep within the Wollemi National Park by a young parks officer David Noble in 1994.

Found in fossils dating back more than 90 million years, the conifers were assumed to have gone extinct about two million years ago. The finding of living specimens triggered dozens of research papers and later, once botanists mastered their cultivation, demand for seeds for nurseries and gardens around the world.

But the continued survival of the fewer than 100 trees across four sites in close proximity in the wilderness is far from guaranteed, prompting the effort to find translocation sites. 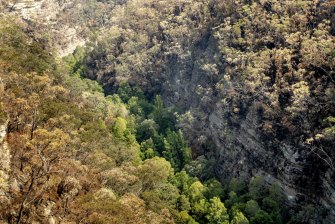 The Wollemi pines are found in the wild in just four locations, in close proximity, in remote region within the Wollemi National Park.

One threat is the introduction of the potentially deadly mould, phytophthora, despite the strict care to spray visitors’ boots and equipment with diluted methylated spirits to kill off the pathogen.

Scientists found the mould that attacks plant roots had reached the main wild site by the early 2000s. They presumed it had been stomped in on the boots of an unauthorised visitor despite heavy fines for breaching the restricted access.

The other main challenge is climate change and the likelihood of more frequent and extreme bushfires that threaten to incinerate those rainforest-like groves as they almost did in the 2019-2020 summer from hell.

Mackenzie is well-versed in the anti-pathogen protocols. “For the first seven years, I thought the pines smelt like metho,” he jokes. “Every visit has the potential to introduce the disease so we limit the visits, and we literally spend days sterilising all of the equipment.” 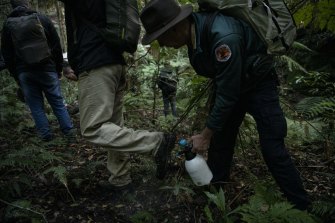 On work trips that can stretch to 14 days, that means sleeping in hammocks, moving in routes in only one direction, and minimising contact with soil.

“If you slip everything gets sprayed, your hands, your pants, and it’s sprayed to saturation,” Mackenzie says. “There’s an incentive not to slip because you’re constantly going to be wet.”

A ban on open fires also meant some very chilly nights for the team, with the mercury sometimes dipping to two degrees.

“By about 7 o’clock, it’s just too cold to talk,” he recalls during a chat near his home in Bondi, far from those discomforts. “People just go, ‘I’m going to bed’. It’s not anti-social, it’s survival.”

“You’re not showering,” he adds. “You’re each given a five-litre bucket for your waste, have to carry out.”

“But there’s a real sense of achievement at the end of each day and especially the end of the trip,” Mackenzie says. “There are any number of obstacles and hurdles we have to overcome and we’re racing the clock to get the work done.”

That race requires endurance too.

The complexity of saving the pines meant it took dedicated staff took two decades from the formation of Wollemi Pines Recovery Team in 1998 to the first translocation of the trees in the wild in 2019.

Scientists from Sydney’s Royal Botanic Garden, Parks and Planning had to devise how to propagate trees and then set up a test site in 2012 at Mt Tomah in the Blue Mountains to study how a variety might cope with replanting. 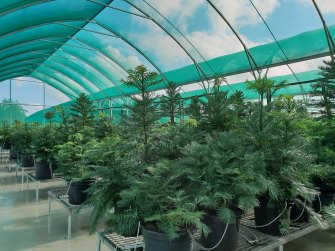 Mackenzie and his crew then had to survey some 50 potential sites from mapping before visiting about 20 to inspect their suitability, including an absence of phytophthora and inaccessibility to unauthorised visitors.

The Wollemi National Park has unwanted pathogens in many of hundreds of canyons great and small thanks to hikers, cattle and training soldiers.

The team found one suitable translocation site and, with just 15 minutes of allocated helicopter time left, spotted a second location that might just work. 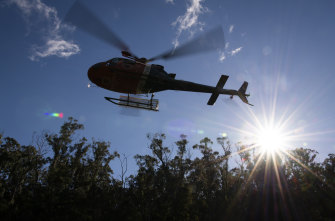 A National Parks and Wildlife Service helicopter departs after dropping a planting team on one of the wild translocation sites for the pines.

Later Mackenzie and fellow planter and explorer Steve Clarke – a Steve Irwin-like clone who discovered the fourth stand of wild pines and prefers shorts save for official photos and his own wedding – would only reach it on foot by battling through dense scrub, scattering tiger snakes along the way.

And so, in 2019, the team planted more than 400 trees, especially chosen to mirror and maximise the very limited genetic diversity of wild pines. Each seedling was watered with five litres to give it a fighting chance as the severe drought across eastern Australian intensified. 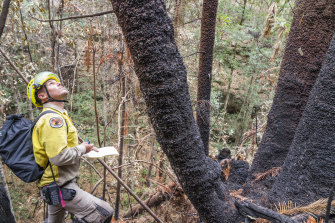 Berin Mackenzie visiting one of the wild sites affected by the 2019-20 bushfires.Credit:John Spencer/DPIE

If the timing seemed ominous, the outbreak of the Gospers Mountain Fire on October 26 that year confirmed it. Started from a lightning strike, the megafire would eventually scorch more than half a million hectares including the wild pines sites and both translocation ones.

Mackenzie would feature, too, in the secret and largely successful mission to save the wild groves. With just a day’s notice, he was called on to help set up pumps and a sprinkler system that helped limit the damage once the flames came licking their relentless way across the landscape.

“The first day I arrived on the site, I thought it was a lost cause,” Mackenzie says. “There was just so little water” in the nearby creek

While it may take years to tell the long-term impacts of the fires on mature trees with their famously Coco Pops-like bark, many of the prospective juvenile plants were killed.

When it came time to revisit the translocation sites, emotions and outcomes were mixed. Winching down from a chopper, Mackenzie almost landed on a live tree.

“It was both frightening and joyous to see a green pine,” he recalls. “It was heartbreaking to see how many we’d lost but 25 per cent [surviving on the first site] is still a win.”

“On the second site, we were searching all day before we found one,” he says. “In the end we only found four out of 218.” 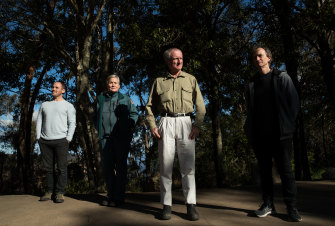 Berin Mackenzie (left) was part of the team behind the successful saving of the rare Wollemi pine trees in the Wollemi National Park during the 2019-20 bushfires. The others, from left, Lisa Menke, Steve Clarke, and Tony Auld.Credit:Janie Barrett

But the team wasn’t about to give up. Aided by a grant of about $63,000 from the International Union of the Conservation of Nature and the National Geographic Society – among the first for an Australian project – they have resumed their backbreaking and sometime dangerous work planting out hundreds of carefully selected and located trees.

“We’re conducting a series of ecological experiments,” is how Mackenzie describes it. About 40 per cent of the seedlings are planted in rainforest-like conditions at the base of the canyons, a similar proportion in drier but more sunlit areas nearer the ridge tops, and the rest in between.

“It’s going to be generations after us saying, ‘yes, you got this part right but not this,’” Mackenzie says. “It’s called adaptive management, so you learn by doing.“

Environment Minister Matt Kean, who was recently choppered in to join one of the planting missions, was full of praise for the results. Earlier this year, he declared the pines an “asset of intergenerational significance”, the first in the state to be given that billing.

“Those are the Praetorian guard of our critically endangered assets,” he said of his crew this week. “They don’t do it for money but their love of the environment. We do stand on their shoulders.”

Kean planted one of the trees, dubbing it “Noel” after his father. 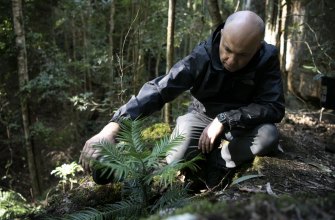 Matt Kean, Minister for Energy and Environment, and waters a Wollemi pine in one of the two wild translocation sites.

“The reason I named it after my Dad is that each generation has the responsibility to pass our environment in a better shape than we found it,” he says.

“The lesson from the Black Summer bushfires is that you need to have plans in place before fires hit if you’re going to protect and save our important environmental assets.”

For Mackenzie, the intervention by the government to divert assets during the height of the bushfires to save the Wollemi pines was a seminal event.

“Anyone would have forgiven them for saying ‘too hard basket’,” he says.

“That was a world-first, that effort to protect the pines. Nowhere else on the planet has such a considerable effort been put towards protecting a biodiversity value in the middle of an environmental catastrophe.”

Mackenzie – who keeps getting delayed in his almost decade-long quest to finish a PhD on how global warming and associated changes in the seasonal timing of fires is affecting post-fire regeneration of Sydney basin plant – is hopeful that other precedents are being set.

“I recognise the pine is special but there are many many other species are just as worthy of protection and investment,” he says. “I hope that in people becoming interested in the pines, they take the next step and learn about some of the less charismatic flora and fauna.”