In a landmark ruling, a NSW court has ordered the state’s environmental watchdog to take action to address climate change. 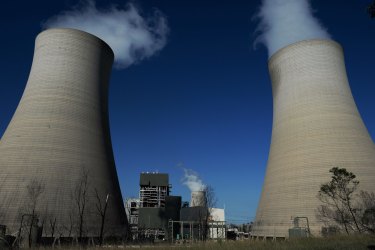 Findings in NSW’s Land and Environment Court that the EPA must set objectives, guidelines and policies for greenhouse gas emissions could set a precedent for other jurisdictions.Credit:Nick Moir

The findings were welcomed by the Environmental Defenders Office, which had argued the case on behalf of the Bushfire Survivors for Climate Action following the record 2019-20 bushfires that scorched more than 5 million hectares in NSW alone.

“It’s a really big win,” Elaine Johnson, a director of EDO’s legal strategy, said. “It means [the EPA] has to do something to ensure there is protection against climate change.”

While Judge Preston did not specify the action the agency should take, the steps could range from putting a price on carbon to placing caps on pollution or setting safe levels in pollution licences, Ms Johnson said.

The ruling comes just weeks after the Intergovernmental Panel on Climate Change released its latest report showing how human activities are warming the planet by burning fossil fuels and other activities.

“The next 10 years are really critical,” Ms Johnson said. “We need rapid and deep emissions cuts.”

Comment has been sought from the EPA and NSW Environment Minister Matt Kean.

Ms Johnson said the court’s decision was the first in Australia to find that a government agency has a requirement to address climate change.

Justice Preston also ordered the EPA to pay the applicant’s costs of the proceedings.