Ruby Wax has revealed OJ Simpson joked about killing Nicole Brown Simpson and Donald Trump ‘scared the s*** out of her’ as she revisits her most talked-about celebrity interviews in a new TV series.

The 68-year-old comedian and actress described Trump as having ‘hatred’ in his eyes when she interviewed him in 1999 for her American Pie series.

‘This is the worst interview I ever did,’ she says in When Ruby Met, which premieres on BBC2 this Sunday. ‘I know because I was shaking in my shoes’.

She added later: ‘He terrified me. That’s my biggest fear, a male looking at me with that much hatred. Trump is impenetrable, I’m like a dog I’m relentless and that’s not what would ever work, I could never get through to him or figure him out.’

Meanwhile she said Simpson phoned her after their 1998 interview to joke about killing Nicole as an ‘April Fools joke’. 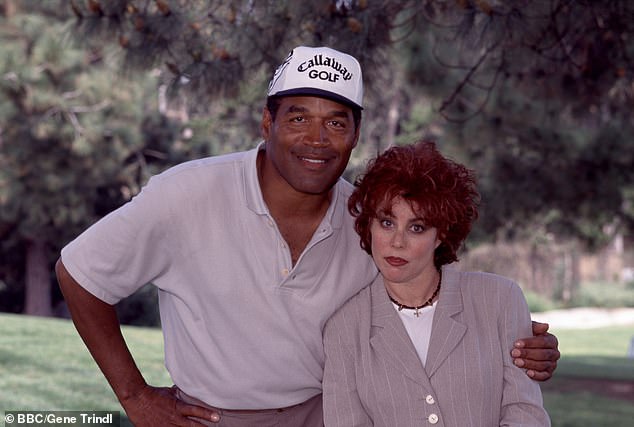 Ruby Wax met OJ Simpson, the former American football legend, was famously acquitted in 1995 of the murder of his former wife Nicole Brown Simpson and her friend Ron Goldman, in 1998 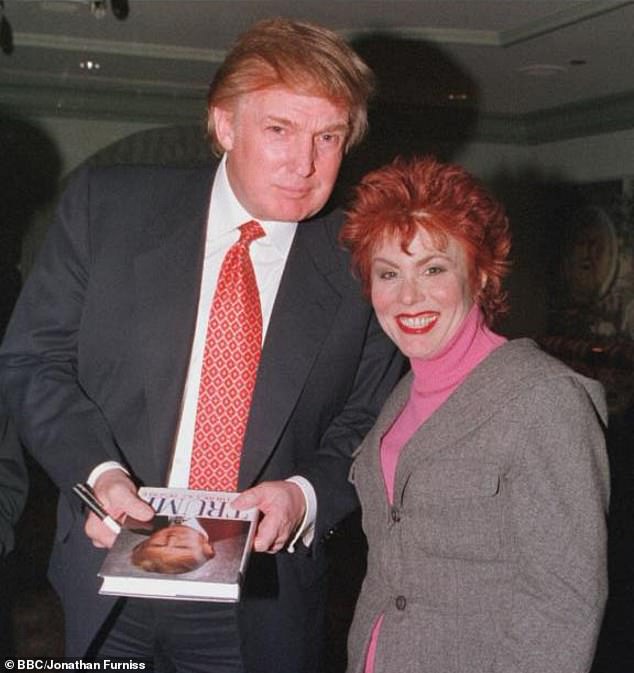 She met former President Donald Trump in 1999 for her American Pie series and says that while he had presidential ambitions even then, nobody expected him to be elected

The interview with Trump began with Ruby boarding his private plane and marvelling and the solid gold sinks, before admitting that she would normally have met the celebrity before the cameras started rolling.

‘Usually I warm people up, there’s a day or something, but this was the first time I met him, said Ruby. ‘I was terrified so I started that shtick right away.

‘Because he scared me I wasn’t as funny as I could be, it was less, less funny and more and more aggressive – but it was too daunting with him.

‘He didn’t get it, and he looked at me the way my dad always looked at me like “Oh god, she’s a cook, she’s not funny, she’s not talented, she’s an idiot”. And I saw that in front of me so I became an idiot.’

Trump initially walked away from their interview, but after some ‘schmoozing she can’t go into’ he returned – although their meeting was ‘dicey’ from then on out.

At one point in the interview the pair were chatting about Donald’s relationship with his mother, when Ruby said her own wasn’t very good, he said he ‘could tell’ because she was ‘angry with a smile’.

‘He read me’, said Ruby. ‘I’m aggressive with a smile. But boy was he scary. When we were in the car, that’s when he started to like me because he started to talk about women and what he liked to do and used the p word…’ 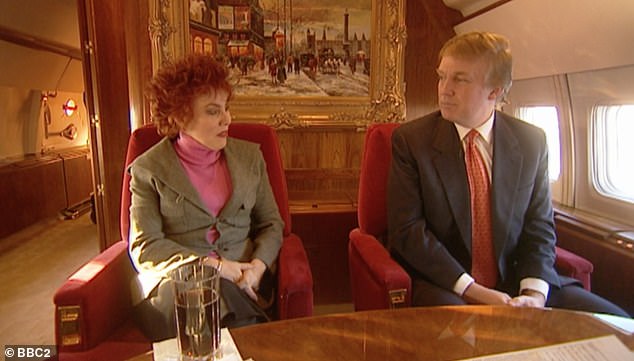 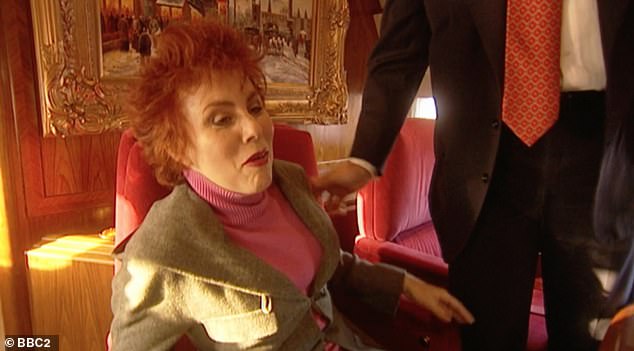 Trump initially walked away from their interview, but after some ‘schmoozing she can’t go into’ he returned – although their meeting was ‘dicey’ from then on out

The pair next visited his Trump Taj Mahal in Atlanta, and though their relationship had slightly warmed, he still constantly called her ‘obnoxious’.

‘I have to admit he was right, she said. ‘I was scared so I was up against a wall. I was saying anything now.’

She soon met Melania, who taught her how to perform the perfect model’s pose, and spoke with her about whether she often dated older men, and whether Donald was able to keep up with her sexually.

‘At the time we just thought this would be a funny interview with a model who was dating a billionaire’, said Ruby. ‘We had no idea she would be the First Lady, neither did she. It was so innocent and what a great tragedy.’

Speaking of his political ambitions, Ruby said: ‘Nobody had any idea this guy would one day be president.

‘Now I would shut up and let him rip about being the next President and kept my face deadly straight. Don’t ever play comedy to a guy that narcissistic, because they see it as a low IQ.

‘He could smell I didn’t resect him, nobody wants to be interviewed by someone who doesn’t respect them,’ said Ruby. ‘It’s very uncomfortable when they don’t like you, it hurts, but you’re making TV and getting paid so you keep going.’

A year earlier Ruby had met with Simpson, the former American football star, was famously acquitted in 1995 of the murder of his former wife Nicole Brown Simpson and her friend Ron Goldman. 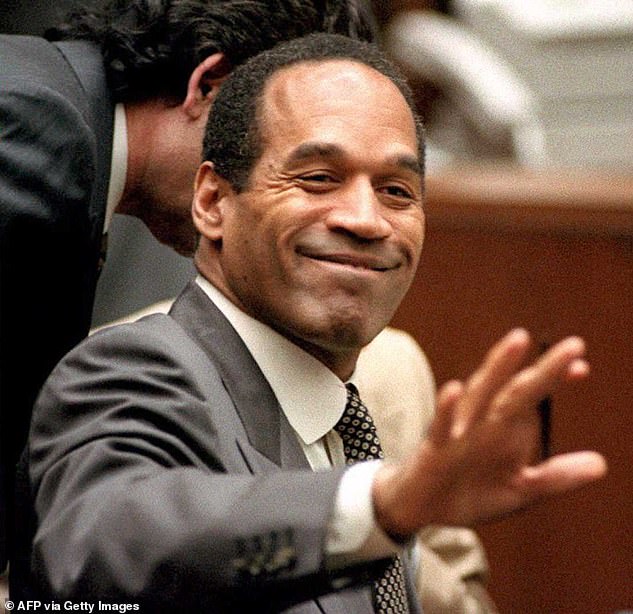 Simpson, the former actor and American football legend, was famously acquitted in 1995 of the murder of his former wife Nicole Brown Simpson and her friend Ron Goldman 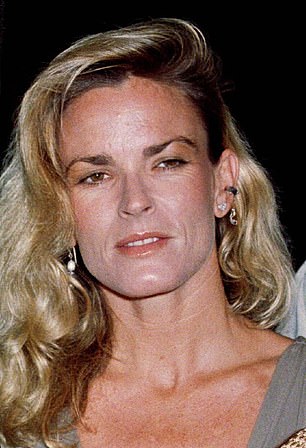 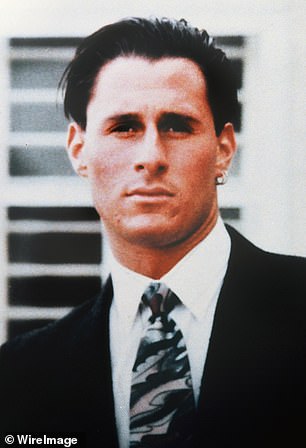 Nicole Brown Simpson and Ronald Goldman were found murdered on June 12, 1994 outside Brown’s condominium in the Brentwood neighbourhood of Los Angeles

After their interview, which Ruby described as a ‘psychological midfield’, she alleges that he phoned her up on April 1st and said: ‘I killed her, April Fools!’

Simpson famously pretended to stab her with a banana after she opened her hotel door to him, but the comedian claimed that he was initially looking for a knife.

‘Afterwards, I did a piece to camera saying “I’ve been fixed up and I don’t know who my date is going to be” and I’d open to door and it would be him.

‘But when he was out there, all the trays were out there and he was looking for a knife, to fool me when the door was open but there was no knife so he grabbed a banana.’

She recalled their first meeting, claiming he told her his favourite poem was one about Lizzie Borden, an American woman tried and acquitted of the axe murders of her father and stepmother in 1892.

‘The first night we went out, we went out with his sister, and all these women came to the table and said “Can we meet afterwards”. They came every night and they want to sleep with a criminal.

‘I think he wanted me to bust him, he said out of nowhere “Want to know what my favourite poem is” and and he went into “Lizzie Borden took an axe, And gave her mother forty whacks; When she saw what she had done, She gave her father forty-one.”

Simpson famously led 20 police cars on a chase through Los Angeles in a white Ford Bronco ahead of his trial and acquittal over the murder of his ex-wife, and Ruby says it didn’t bother him that they did had chosen a similar white van for their interview.

‘His eyes were darting around like a mad person, his eyes were very jagged, he wasn’t present, his mind was all over the place’, she said. ‘It was really hard to stay focused I couldn’t look in he was really deflecting.

‘I think he was frazzled, I think he was not in his right mind and he was so bored in his life he was grateful for that interview, it was a distraction’.