Sasha Obama, 19, lip syncs and dances to profanity-filled rap song in viral TikTok video (that was deleted as soon as fans recognized the former First Daughter)

Former First Daughter Sasha Obama has become a TikTok star after a video of her rapping to a City Girls song went viral and led to her trending on Twitter.

In the playful clip, the 19-year-old sophomore at the University of Michigan and her friend can be seen animatedly lip-syncing the lyrics to Moneybagg Yo’s ‘Said Sum’ remix featuring the rap duo City Girls.

Originally uploaded by TikTok user @Cakethatsmg, the video was swiftly deleted from the platform when people started to recognize Barack and Michelle Obama’s youngest daughter — but that didn’t stop fans from sharing it on Twitter. 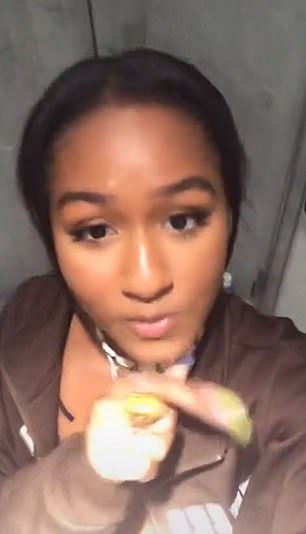 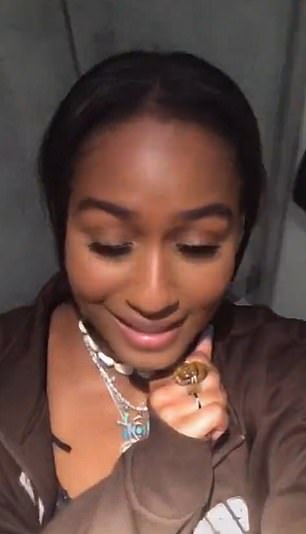 The footage shows Sasha wearing a brown zip-up sweatshirt over a black belly-baring top and jeans. Her hair is pulled back, and she is sporting layered necklaces, rings, and long nails.

‘All these n****s wanna f**k JT / Hellcat, this a SRT,’ she lip-syncs in the clips as she and her friend take turns reciting the song’s lyrics.

Twitter user @ternjerler posted the video on Sunday, writing: ‘Am I crazy or is this Sasha thee Obama.’

The clip has been viewed more than 1.3 million times and led to Sasha’s name trending on Twitter.

The performance even got a stamp of approval from City Girls rapper JT, who reposted the video and added a heart-eyes emoji.

Many fans were happy to see that Sasha was living her best life as a college student and praised her for the TikTok performance.

‘Sasha Obama would be famous even if her dad wasn’t Barack,’ another insisted. ‘We honor her always.’ 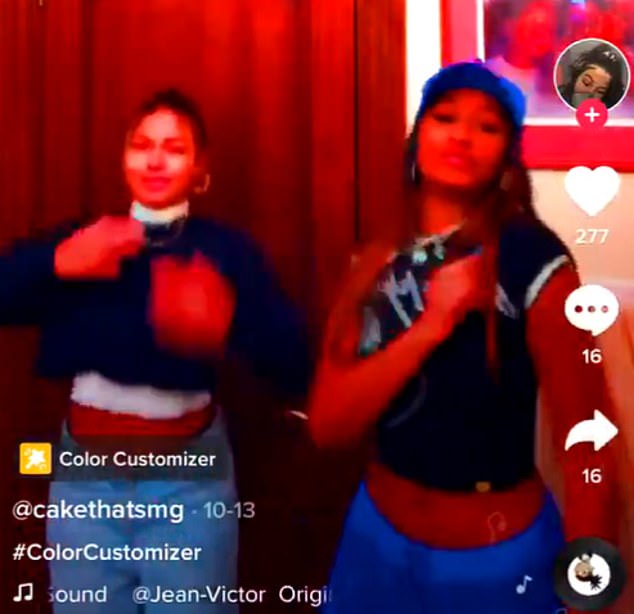 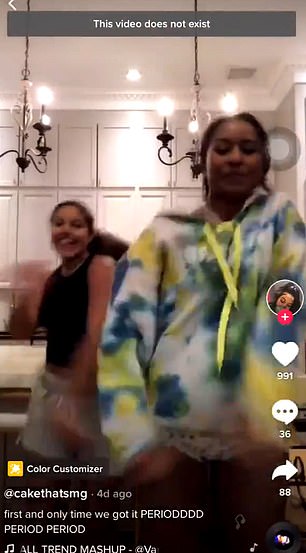 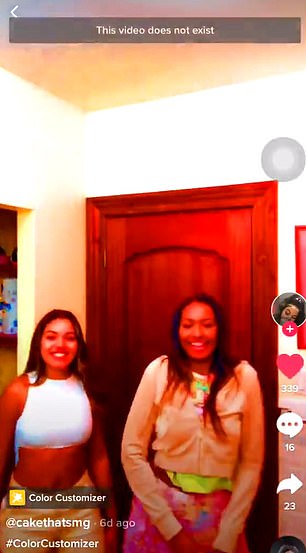 Living it up: Sasha was all smiles in the playful clips, which have also been deleted 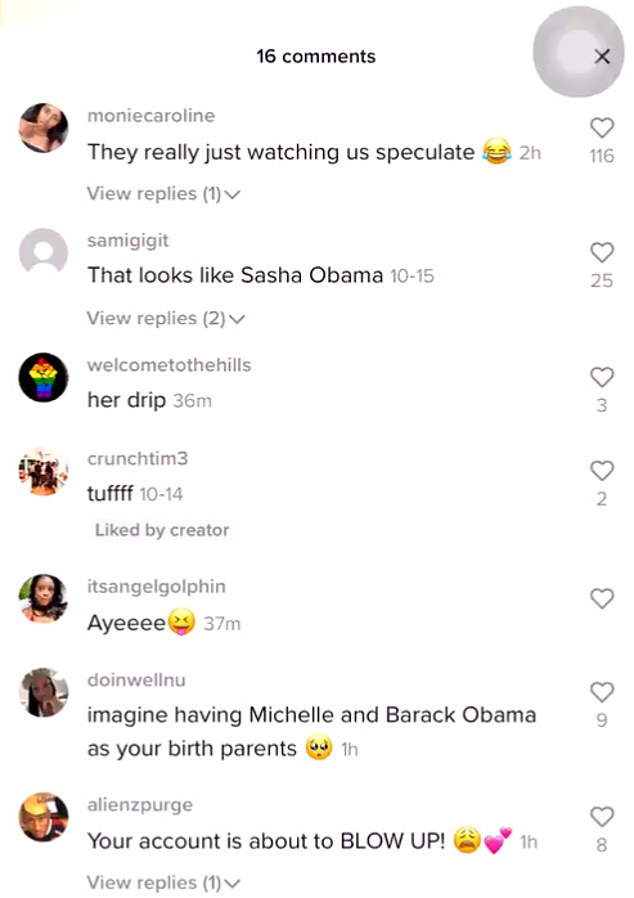 Blowing up: Before the videos were removed, fans speculated in the comments about whether it was Sasha dancing in the clips

Others urged critics to leave Sasha alone, stressing that she is a college student and her father is no longer president.

‘Sasha Obama is 19 dancing around making Tiktoks and singing them dirty rap songs. Do you know what I was doing at 19? Ecstasy. Like 5 times a week. And smoking maritheejuana… and drinking Puckers and Wild f*****g Turkey all the time. She is doing just fine,’ one Twitter user wrote.

‘Sasha Obama a whole college student and her pops ain’t been in office in 4 years. She should be able to post on social media whatever she want to be honest. This don’t hurt nobody,’ someone else commented.

There were also apparently TikToks of Sasha dancing on @Cakethatsmg’s page, but they were also deleted. 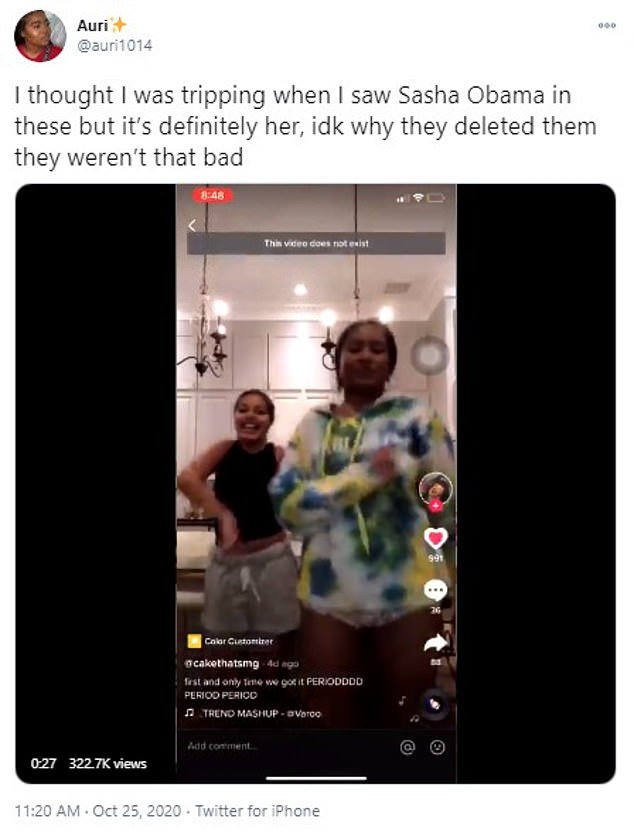 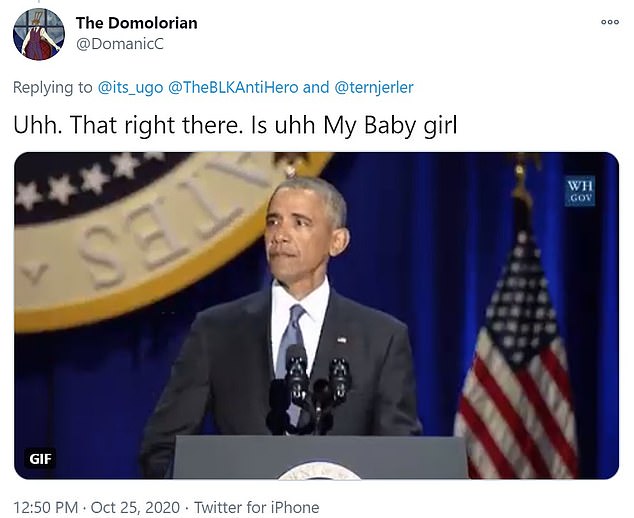 Let her live: Fans were happy to see Sasha enjoying herself, and they urged critics to leave the sophomore a the University of Michigan alone

Twitter user @auri1014 shared a complication video of the dance clips as well as the comments speculating it was Sasha.

‘I thought I was tripping when I saw Sasha Obama in these but it’s definitely her, idk why they deleted them they weren’t that bad,’ she wrote.

Last month, Sasha’s mother Michelle shared that both of her daughters are taking online classes amid the coronavirus pandemic.

The 56-year-old told Jennifer Lopez during an Instagram Live that studying at home has been difficult for both Sasha and her 22-year-old sister, Malia, who is a senior at Harvard University. 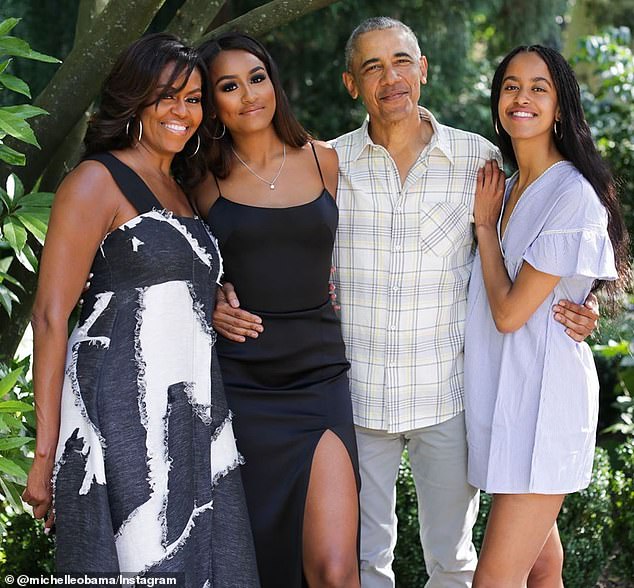 Normal teen: Sasha, pictured with her parents and older sister Malia, has led a relatively private life since her father left office 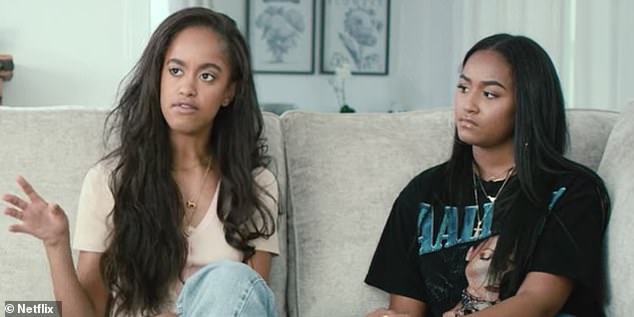 Proud daughters: Sasha and Malia, 22, praised their mother Michelle in her Netflix documentary, Becoming, which debuted in May

‘We’re itching to get back to campus, but things are just confusing … not quite safe,’ the former first lady said. ‘I’m just glad that they’re staying put, even if they’re sick of me.’

Sasha has lived a relatively private life since her father left office, but she did appear in her mother’s Netflix documentary, Becoming, which debuted in May.

‘I’m excited for her to be proud of what she’s done,’ Sasha said of her mother during an interview in the film.

‘Because I think that that’s the most important thing for a human to do, is be proud of themselves.’