A global inquiry has identified crucial failures in the early stages of the coronavirus pandemic when Chinese authorities could have acted "more forcefully" to protect public health.

The inquiry, which reports to the World Health Organisation, has also found that most countries did not act on warnings about early cases and did not share information fast enough when cases emerged. 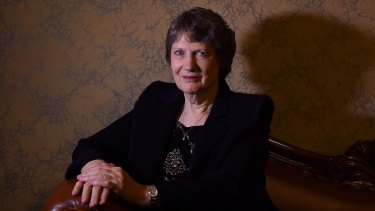 Former New Zealand prime minister and former head of UNDP Helen Clark has criticised China and other countries for being too slow to act on the spread of COVID-19.Credit:Kate Geraghty

The report also criticises the WHO for taking three weeks to form an emergency group to counter the virus and being too slow to declare the crisis to be a pandemic.

The findings are part of a second report from an ongoing inquiry chaired by former New Zealand prime minister Helen Clark and former Liberian president Ellen Johnson Sirleaf, who said they would look further into the "coherence" of the health response.

The Independent Panel for Pandemic Preparedness and Response said there were "lost opportunities" in the early stages of the outbreak when basic public health measures should have been put in place.

"While still collecting information, the panel is becoming more confident in its understanding of the early events in Wuhan, China, where the first presently known cluster of cases was identified," it said.

"What is clear to the panel is that public health measures could have been applied more forcefully by local and national health authorities in China in January."

The report also finds fault with other countries for being too slow to respond when there was evidence of COVID-19 cases in a number of countries by the end of January last year.

"Public health containment measures should have been implemented immediately in any country with a likely case. They were not," it said.

"According to the information analysed by the panel, the reality is that only a minority of countries took full advantage of the information available to them to respond to the evidence of an emerging epidemic."

Information could have been shared "more widely and proactively" between countries, and authorities should have taken faster action to deploy containment measures whenever cases appeared.

The panel highlighted a briefing for the WHO executive board on February 4 that heard of 12,000 confirmed cases in China but only 176 in other countries, saying this was “definitive evidence” of human-to-human transmission.

This was a "clear signal to all countries" with even small numbers of cases that they needed to act quickly contain the spread.

"In far too many countries, this signal was ignored," the panel said.

The two inquiry leaders began their work last September after being set up by the World Health Assembly, the congress of WHO member states. It is due to report again in May.

In a rebuke to the WHO, the latest report questions why the global health organisation’s emergency committee was only convened in the third week of January when the virus had been identified earlier.

“Nor is it clear why it was unable to agree on the declaration of a public health emergency of international concern when it was first convened,” the report said.

“A public health emergency of international concern was declared on 30 January, but on the evidence considered thus far by the panel, the extent of response to that in countries around the world fell short of what should have been expected.

“One question is whether it would have helped if WHO had used the word pandemic earlier than it did.”

The WHO declared a pandemic on March 11 after debate over whether pressure from the Chinese government had discouraged it from using the word.

Prime Minister Scott Morrison called the threat a global pandemic on February 27 and launched an emergency plan to respond, naming the spread outside China as a key factor.

On that day, WHO director-general Tedros Adhanom Ghebreyesus condemned the push to declare a pandemic.

'… public health measures could have been applied more forcefully by local and national health authorities in China in January.'

“Using the word ‘pandemic’ carelessly has no tangible benefit, but it does have significant risk in terms of amplifying unnecessary and unjustified fear and stigma, and paralysing systems,” he said.

The United States reported its first case of human-to-human transmission on the same day.

The latest report found WHO issued almost 900 recommendations to countries and health authorities on COVID-19 from January 1 to November 14, saying the “sheer volume” suggested a “lack of direction, clarity and consistency” that could have helped set priorities.

In their preface to the report, Ms Clark and Ms Sirleaf blamed tensions between countries and national leaders for weakening the response to the crisis.

“Those tensions have detracted from decisive and internationally co-ordinated responses to the pandemic,” they wrote.

“The virus has thrived on division, and the resultant pandemic has exacerbated tensions and undermined multilateral action just when it was most needed.”

They also called for a fair distribution of vaccines so that wealthy people did not gain priority at the expense of the world’s poor.

“Whether you happen to be born in Liberia or New Zealand or anywhere else, should not be the factor that determines your place in the vaccine queue,” they wrote. “Only the application of principles of universality and equity will be sufficient to enable the world to come out of this crisis together.”

Get our Coronavirus Update newsletter

Stay across the news you need to know related to the pandemic. Sent Monday and Thursday. Sign up here.