A student who is such a dead ringer for Sansa Stark that she worked as Sophie Turner’s stand-in for Game of Thrones – has reveals that even Joe Jonas got them mixed up.

With her long red hair and blue eyes, Laura Butler from County Laois, Ireland, was regularly confused for Sophie on set – and even the actress herself said their visual similarities were ‘weird’.

But the 22-year-old claims she never saw the resemblance until she met the actor herself – despite pals at college pointing out the similarities as Game of Thrones became more famous.

After signing up with an extras agency, Laura got a call inviting her to work as a stand-in for the show’s final series in October 2017. 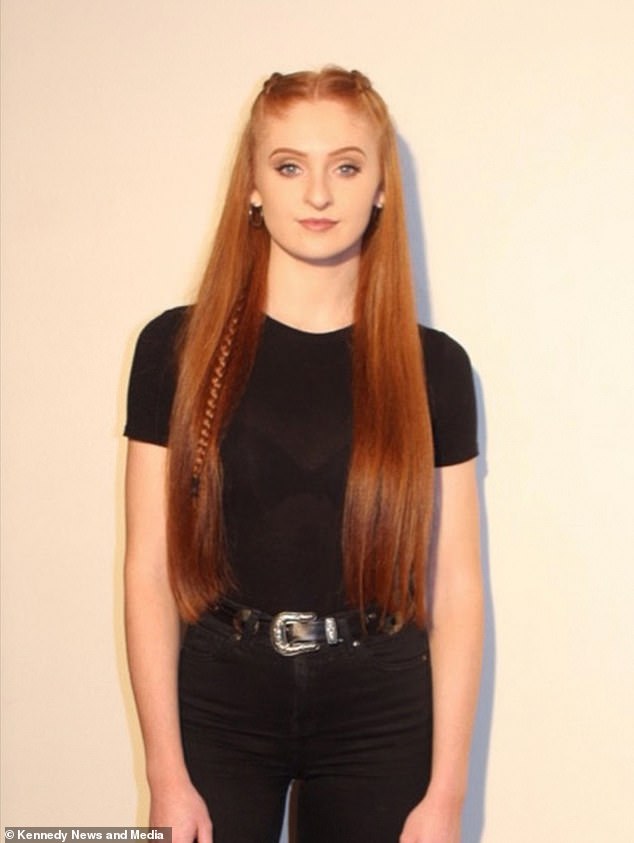 Laura Butler (pictured), 22, from Ireland, worked as Sophie Turner’s stand-in on the set of acclaimed series Game of Thrones 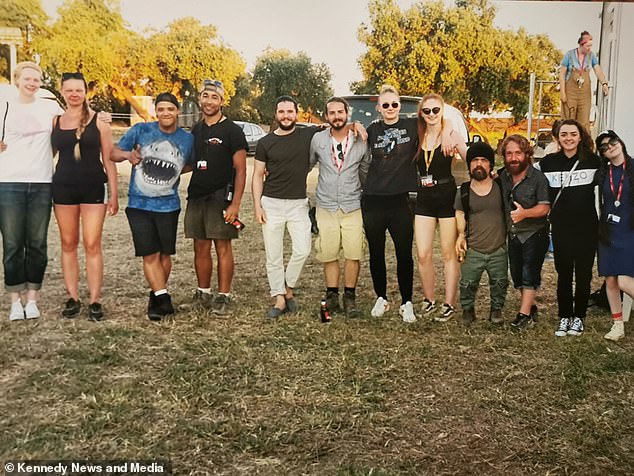 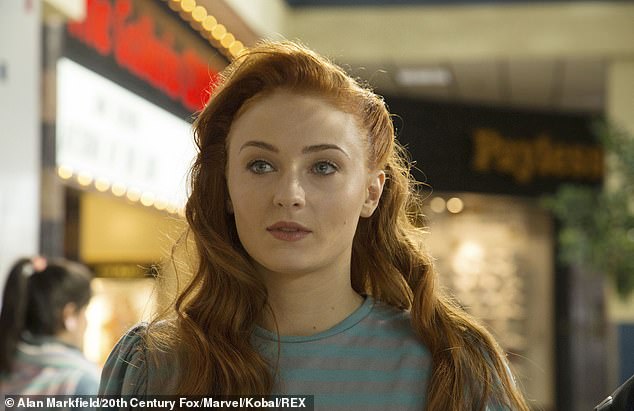 Laura said she was often mistaken for Sophie by members of the cast and crew of Game of Thrones – and had Joe Jonas confused as well (pictured, Sophie Turner in Dark Pheonix)

She claims her costume measurements were so close to Sophie’s own that she even picked up extra work as her scene double – and is featured on screen in the season eight episode ‘The Long Night’.

Cast and crew regularly mistook her for her counterpart, with some getting as far as to congratulate her on her recent engagement before realising their mistake.

But it wasn’t until Sophie revealed in an interview in June that Joe Jonas had ‘tried to kiss her body double’ that Laura realised even he had confused the pair for each other.

Laura, from Laois in Ireland, said: ‘I definitely take it as a compliment, it’s such a good compliment. 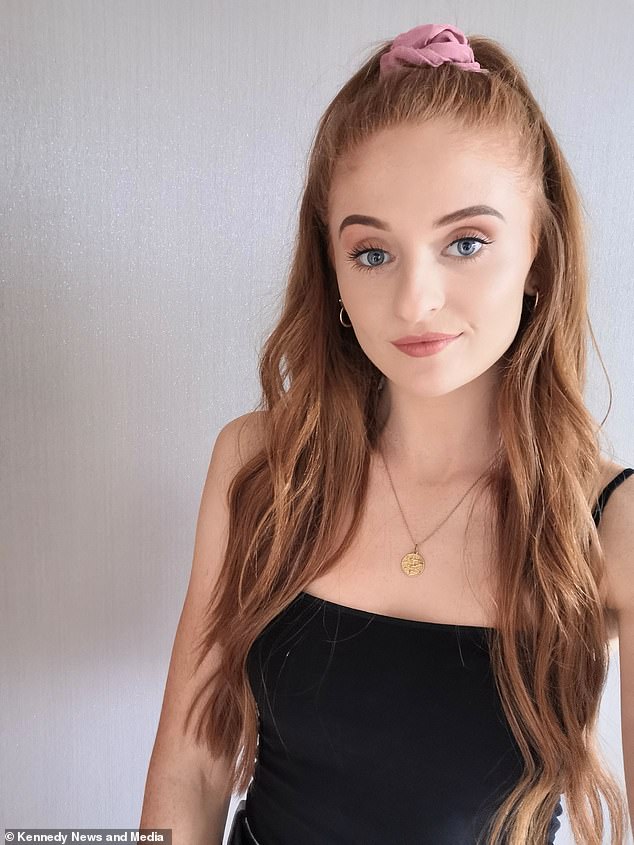 Sophie worked as Sophie’s stand-in on the later seasons of the HBO show. She said she was also mistaken for the actress by members of the public 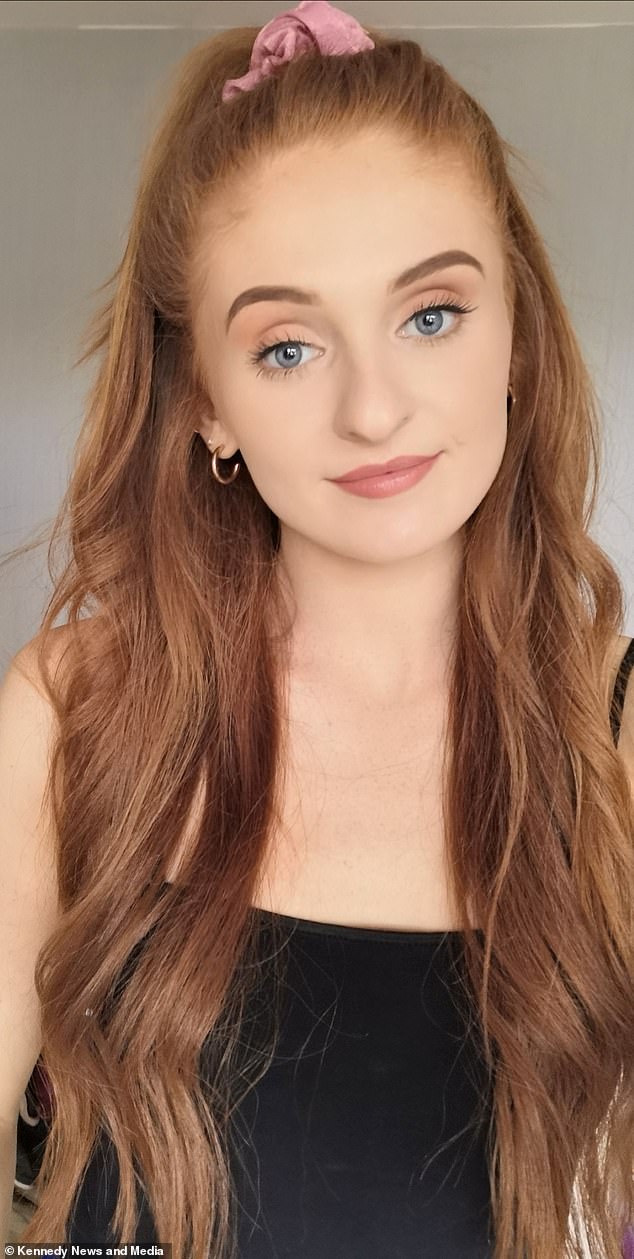 Laura (pictured) said Sophie and her got to know each other while working on the set, and that the actress was very friendly

‘In pictures I suppose I see the resemblance, but when I’m standing next to her or looking at her directly I don’t see it.

‘I think it’s more the character than Sophie herself, if that makes sense. I’m not sure if it’s the hair colour. But she even said herself, “oh, this is a bit weird”.

‘A few of my friends said things to me throughout school. I had seen pictures of her but I didn’t think I looked anything like her then. Personally I didn’t see it but they did.

‘I don’t think I ever actually saw it until I met her. But I don’t think it has really affected me. We’re obviously two different people living completely different lives. 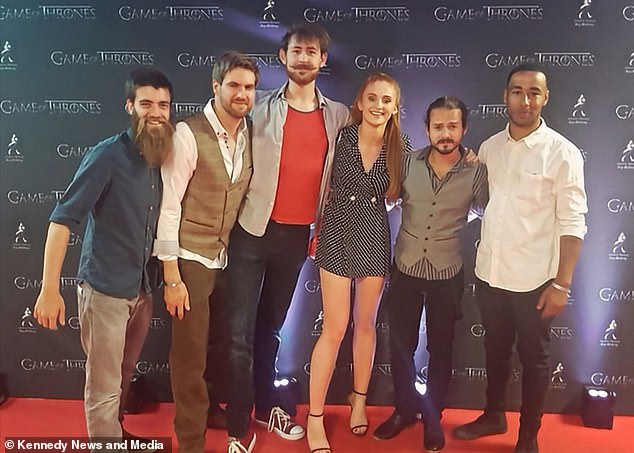 Laura pictured at the red carpet with other members of the Game of Thrones cast. The young woman said she felt sorry for the level of attention Sophie was getting 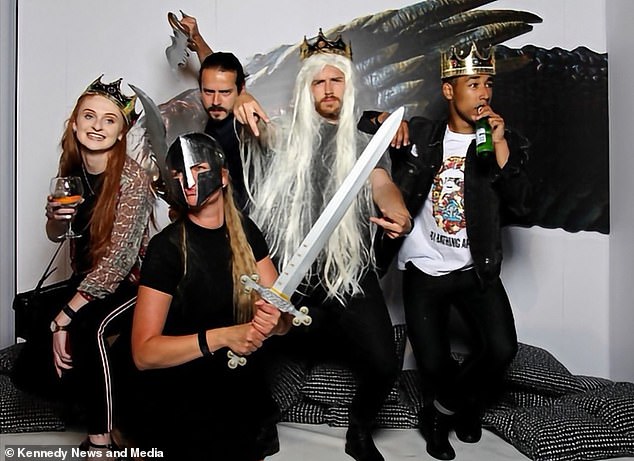 Both Sophie Turner and Maisie Williams were very shocked by how similar to Sophie Laura looked. Pictured: The stand-in on a Game of Thrones night out

‘The first day I met her was her first day back on set. It was just brief because there was a lot of work to do. It was a quick hello and saying how strange it was because of how alike we looked.

‘As we went on we chatted a bit more and I got to know her a bit more. She was always really friendly and really nice and chatty to me.

‘At the start it was a quick hello and I think she was in shock a little bit as well. 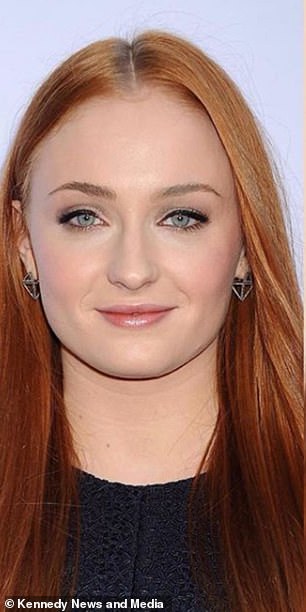 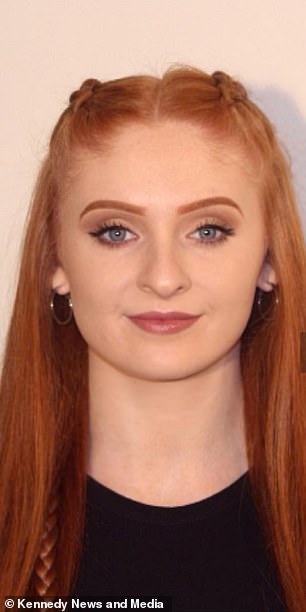 Uncanny! On the left, Sophie sporting her Sansa Stark red hair, on the right, Laura, with a Sansa-inspired hairdo

‘A lot of the people working behind the scenes did a double-take at me and joked that I even walk like her.

‘It was maybe things I wouldn’t pick up or notice in her but other people were noticing in me. It was strange.

‘There was another time when I was on set and Maisie Williams came on and looked at me and then looked at Sophie and was shocked at how similar and alike we were.

‘There were a few articles which went around a while ago about Joe Jonas having mistaken Sophie’s double on Game of Thrones but he was on set quite a few times.

‘I have said hello to him in passing and that was about it, for professional reasons, of course. I think those articles were about me.

‘She mentioned how similar her Game of Thrones double was, which I presume was me. 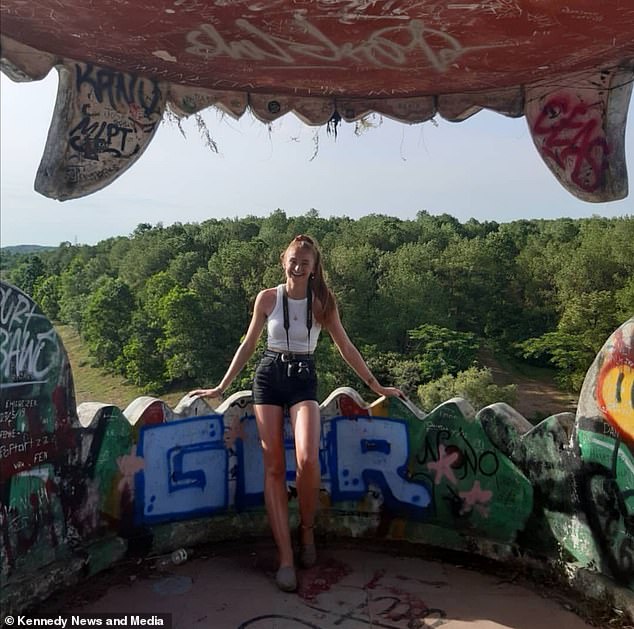 Laura posing during a recent holiday. The student admitted people congratulated her on her engagement , thinking she was Sophie, who got engaged to Joe Jonas last year 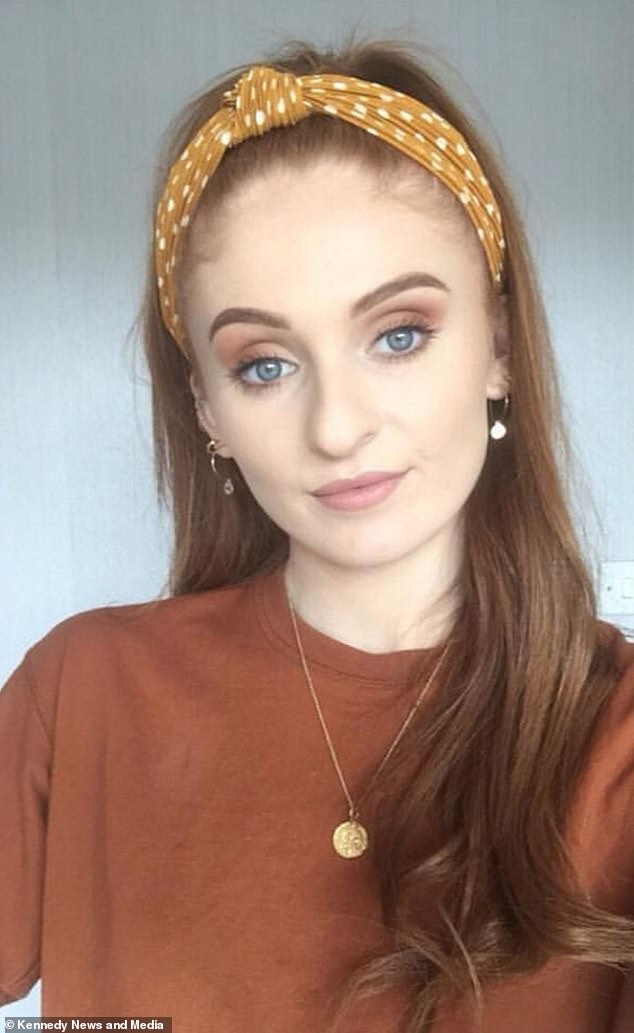 Queen of the North: Laura (pictured) said she will be stopped in the streets by people asking her if she was Sophie 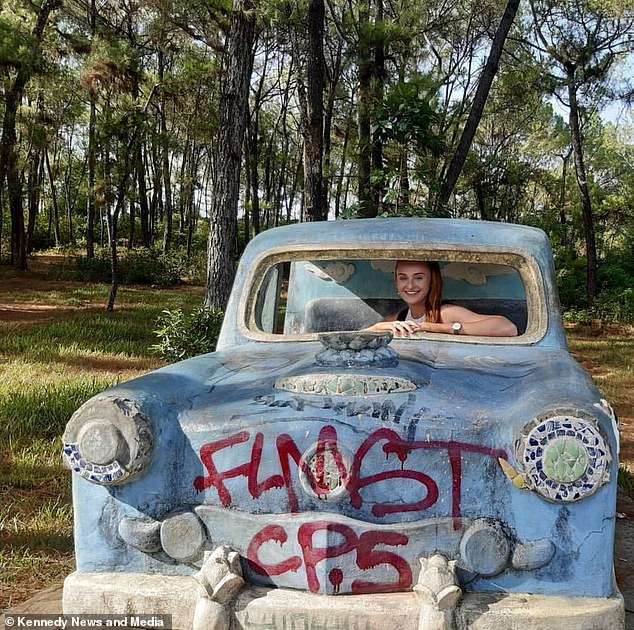 Laura (pictured on a day out) said she appreciated her privacy more since working as Sophie’s stand-in, but said she was extremely grateful for the opportunity

‘It was then that she went on to say that Joe Jonas mistook me for her on set one day, which I thought was really funny because I didn’t realise that until I had read it.

‘My first day on set was Sophie’s first day back too, and a lot of people were like I haven’t seen you in a long time and the breakfast tent that we used was the same as the cast and production tent.

‘Someone came over and said, “congratulations on your engagement” and I was like, “sorry?”. They didn’t realise.’

Laura claims she regularly gets asked if she knows she looks like Sophie and was even asked to pose for pictures with fans while on holiday at Disneyland.

The similarities between Laura and Sophie have made the double consider going into acting.

But she claims she had a new appreciation for privacy after working as a double in Seville, Spain, during the final season and being bombarded for autographs by hopeful fans. 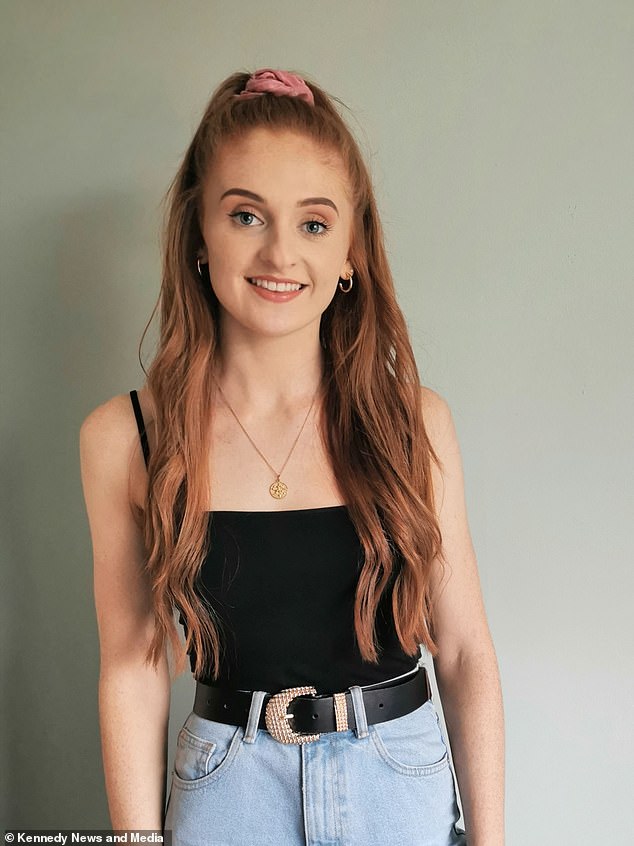 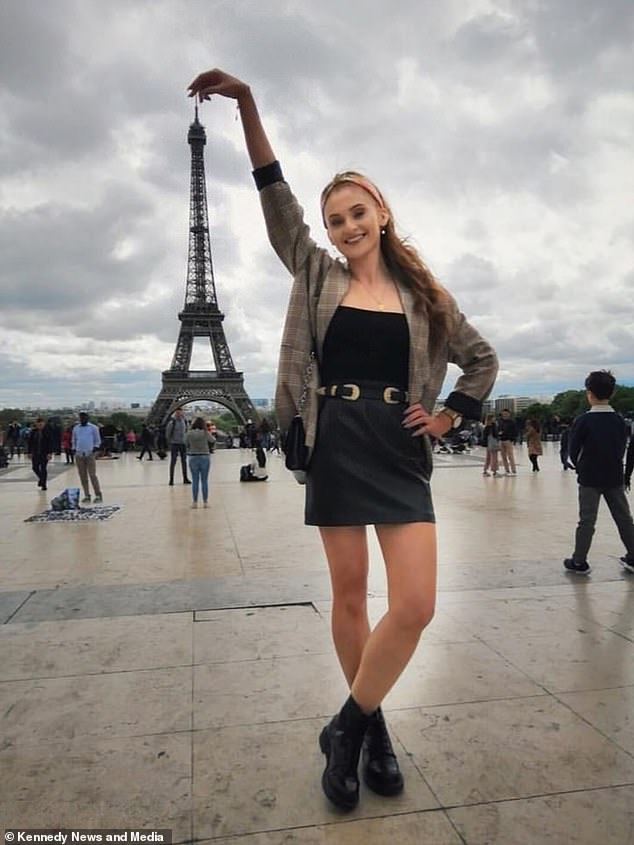 Laura during a holiday in Paris. The young student said she was now used to people starring at her but thought it funny

Laura, who is an economics and sociology student, said: ‘I’ve been stopped by strangers on the street a few times.

‘I was in Disneyland two years ago before I even worked on Game of Thrones and I was with some friends.

‘I wasn’t paying much attention to anyone else but they kept saying, “Laura, people are staring at you.”

‘We got off one of the rollercoasters and there was a family and the dad waited for me until I got off to ask me if I was her. I said I wasn’t, but a few people took pictures of me.

‘I just thought it was quite funny and it didn’t bother me at all. 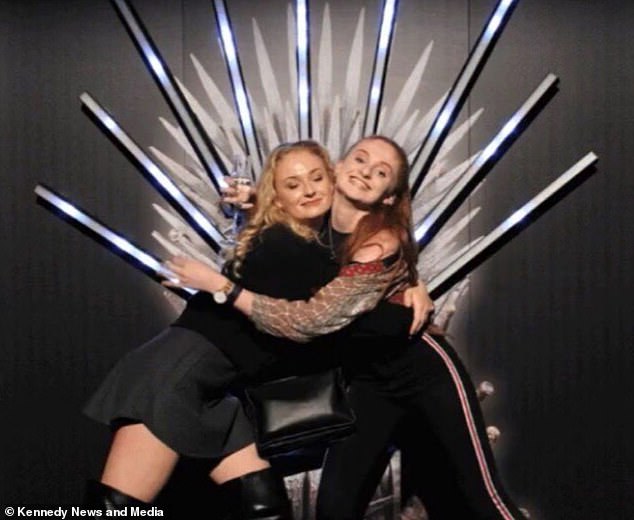 Sophie and Laura together behind the scene. Laura said she ha become good friends with the other stand-ins

‘Even when we were filming in Seville fans were aware the cast was there so a few people came over if myself and the other stand-ins were going to get food because we all look so like the cast.

‘For that week [the attention] was so constant I do feel really sorry for the cast in a way. They obviously have amazing lives but no privacy, so I do see how hard it must be for them.

‘If anything it’s just an amazing compliment and has lead to such unbelievable opportunities for me.

‘It has changed my life in a way, for being able to work on Game of Thrones for so long and having met such incredible and talented people who worked on there and even being good friends with the other stand-ins as well.’