Historical dramas that stick loosely at best to historical detail, Canadian comedies that "popped" into the centre of popular culture and a small puppet named Grogu, made of felt and wires, who quite literally stole the show. That was the year that was on the small screen.

Some of these shows are among the year's biggest hits. Others are still obscure, taking their first steps out of the shadows and into the cultural conversation. What all of them did, however, was to re-write the rulebook for their genres, or for television itself. 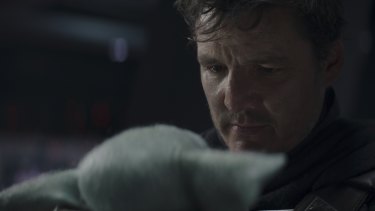 Mando (Pedro Pascal) and Grogu say goodbye in the tearful season finale of The Mandalorian.Credit:Lucasfilm

The Mandalorian (Disney+): cinema's biggest franchise conquered TV
The key elements of the success of the Star Wars saga – cinematic storytelling and big-budget special effects – are among the toughest things to master on the small screen, and yet The Mandalorian has, in two seasons, shamed its larger franchise cousin. The story of a lone bounty hunter Din Djarin (Pedro Pascal) making his way in the rough "outer rim" of the galaxy was writ large from westerns and old-fashioned space opera when it started, but the addition of Baby Yoda – real name: Grogu – turned the premise on its head and tapped the most potent themes in Star Wars: fathers, sons and inter-twined destinies.

The Queen's Gambit (Netflix): which turned chess into a nail-biting sport
At first glance, this is tough to break into. That is, in the first quarter hour you meet a girl with a bowl cut who plays chess. Next big thing on TV? Maybe not, you're thinking. By the time you're done with the seven-hour series, with its stunning visual sequences and brilliant writing, however, you will be wondering why chess isn't on Wide World of Sports. Based on Walter Tevis' novel of the same name, the series follows Beth Harmon (Anya Taylor-Joy), a young superstar chess player whose brilliance at the chess board, born from a childhood addiction, is also her Achilles heel.

Zoey’s Extraordinary Playlist (Stan*): the TV musical which wasn't schmaltzy
With a properly wacky premise – Zoey (Jane Levy) wakes up after a MRI medical scan with the peculiar ability to not only hear other people's thoughts, but have those thoughts set to music – this series arrived with almost unequalled potential to fall on its face. (Cop Rock, anyone?) And yet, proving that the best ideas for television are invariably the most risky, it delivers. What is more, the most common pitfall in this genre, collapsing into a puddle of schmaltz, is a hard one avoid, and yet Zoey’s Extraordinary Playlist, while it might wobble on its skates from time to time, stays on the ice and glides home for the finish. 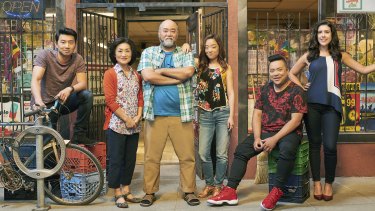 Kim's Convenience (Netflix): the funniest Canadian sitcom since Schitt's Creek
Come on Canada, we barely had time to take a breath before you followed the year's most loved comedy – Schitt's Creek, about a rich family rendered poor and forced to face up to themselves, and each other – with another family sitcom which is rich in nuance and heart. Kim's Convenience is your future binge, about a Korean-Canadian family who run a corner shop in Toronto. It's hard to work out where the show's greatest strength is. Ins Choi's writing (the series is based on his award-winning stage-play) for sure. But also the cast: Paul Sun-Hyung Lee, Jean Yoon, Andrea Bang and Simu Liu.

Ted Lasso (Apple TV+): the giant comedy tree, grown from a sketch comedy acorn
Not since Absolutely Fabulous, which began its life as a humble sketch on French & Saunders, has a one-off comedy sketch sprung to life as a fully formed comedy of such substance and brilliance. In the original sketch, produced by NBC to promote the UK Premier League, Jason Sudeikis played Ted Lasso, an all-American motivational sports coach appointed to coach Tottenham Hotspur F.C. In the sitcom, written by Sudekis with Scrubs creator Bill Lawrence, Lasso is now the coach of AFC Richmond, a mediocre football team battling for its existence. And as with Absolutely Fabulous, the power of the concept is not in its laughs, of which there are plenty, but in its moments of pathos, which sucker-punch you.

The Great (Stan): the properly hilarious history lesson
Australian screenwriter Tony McNamara delivers this bold and hilarious take on the rise of Russian monarch Catherine the Great with an irreverent approach to both the characters, who leap around the frame like The Great is a living comic book, and the historical detail, which is covered by the brilliant opening caveat: "an occasionally true story". As with most great dramas, though, the writing can only get you so far. Here you have Elle Fanning and Nicholas Hoult as Catherine and the man to whom she is betrothed, Peter, a right royal dud, delivering career-best performances as a Royal couple who up-ended the system and rewrote the history books. 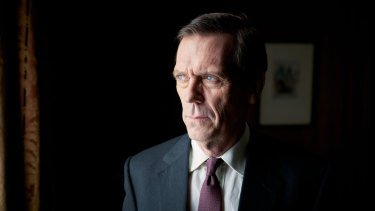 Roadkill (ABC iView): the political thriller that felt authentically political
Screenwriter David Hare assembles that rare creature: a political thriller that feels true without being intrinsically partisan. Hugh Laurie plays Peter Laurence, an authentically treacherous politician whose sole interest is the preservation of his own skin. He is dogged, as the story opens, by a personal scandal which threatens to rip his career to pieces but of course, never quite does. Instead, in a magnificent echo of Michael Dobbs' Francis Urquhart from the dazzling (original) House of Cards, Peter Laurence goes from one treacherous deal and double deal to the next.

The Crown (Netflix): the historical drama when fiction was truer than truth
Perhaps the most controversial season of The Crown yet, the fourth season gave us Princess Diana, prime minister Margaret Thatcher and the beginning of the War of the Waleses. What could go wrong? Well, writer Peter Morgan has always tweaked the historical detail to fit the dramatic narrative but somehow this season that issue came home to roost, perhaps because he chose to tweak a detail too many. That said, while it battled to hang onto its accuracy, the fourth season was in every respect a ripper, with series best performances from Olivia Colman and Josh O'Connor. 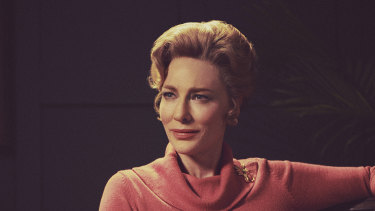 Mrs America (Binge): which was woke, but it did not weary us
Cate Blanchett is luminous as housewife-turned-political hurricane Phyllis Schlafly who was somehow lost to history until this series unearthed and recreated her story. That most challenging of heroines – a community-leading woman who advocated keeping other women in a secondary state of being – Blanchett, helped by Dahvi Waller's writing gives dimension and meaning to Schlafly, and places her in the context of her battle against the so-called "second wave" feminists who advocated the Equal Rights Amendment, intended to place men and women on an equal footing in law.

The Haunting of Bly Manor (Netflix): the scariest "scary movie" ever
The follow to Mike Flanagan's The Haunting of Hill House – another hide-behind-the-sofa horror masterpiece – The Haunting of Bly Manor is Dark Shadows writ large for the streaming generation, an old school gothic "haunted house" drama which, as Dan Curtis' Dark Shadows did a generation ago, borrows heavily from the classics, particularly Henry James’ The Turn of the Screw. The thing is, this show is genuinely frightening. It's not an easy watch at the best of times, but daytime, and in daylight, is always recommended, particularly if you have a weak heart.

*Stan is owned by Nine, publisher of this masthead.

Check out The Watchlist for the next TV show, streaming series or movie to add to your must-sees. Sign up to get it every Thursday.