The Morrison government’s decision to scrap Victoria’s controversial Belt and Road agreement with China was a given from the moment Federal Parliament passed new foreign relations laws in December.

What was also a given was China’s reaction. A Chinese embassy spokesman was quick to admonish the Morrison government for “another unreasonable and provocative move taken by the Australian side against China”. He also made clear there would be consequences: “It is bound to bring further damage to bilateral relations and [Australia] will only end up hurting itself.” 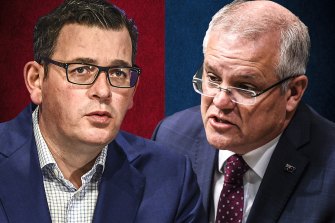 The cancellation of Victoria’s Belt and Road Initiative deal with China was an early test of new Commonwealth powers to veto state government agreements with foreign governments. Credit:

With the dumping of the deal having the backing of Labor, the Greens and the crossbenchers in Canberra, it was hardly surprising that the Victorian government offered little resistance. It found itself encircled.

For Premier Daniel Andrews, the initial signing of the deal and ongoing justification was always about investment, trade and jobs. When defending it, he argued that diplomatic issues should be kept separate from the economic benefits that close relations with China would bring. But that is not a game China wants to play. It has repeatedly shown its willingness to weaponise its trade relations with nations which criticise it, whether it be concerning human rights, national sovereignty, international law or its suppression of internal critics.

China wants to reward those who support its policies. And, in part, it does that by promoting trade and investment through its Belt and Road program. It then wants those that benefit to look away when its more egregious authoritarian ways are revealed.

Hints of that arose last year when Victorian Treasurer Tim Pallas was roundly criticised for suggesting Australia had vilified China by pursuing an independent coronavirus inquiry.

The China issue is also sparking discord between Australia and its trans-Tasman neighbour, with New Zealand Foreign Minister Nanaia Mahuta criticising efforts to pressure China through the 70-year-old spy alliance known as the Five Eyes. And in January, New Zealand Trade Minister Damien O’Connor suggested Australia should speak with more “respect” and “diplomacy” towards China.

There is no question that if Australia were to refrain from criticising China over its political crackdown in Hong Kong or its treatment of Uighurs in the province of Xinjiang, or were to keep quiet about Beijing’s attempts to interfere in our political system or its cyber attacks on a range of Australian entities, then relations would probably improve. But few Austrlians would want to take that approach.

Finding the right balance between standing our ground with an emerging superpower and reaping the economic benefits of its enormous growth is no easy task. But that undertaking should be done at the national level by the federal government, not at a state level.

While the intention may have been right, it was a mistake for Victoria to enter the Belt and Road deal. Now that the Band-Aid has been ripped off, there is no reason Victoria cannot continue to nurture ties with China, but it needs to do so in consultation with the federal government.

Victoria’s Employment and Small Business Minister, Jaala Pulford, said cancelling the Belt and Road agreement would not slow the state’s pipeline of infrastructure projects. She said Victoria’s transport projects, some of which involve Chinese-owned firms, would continue unaffected.

That is at it should be. China should be a welcome economic partner. But the authoritarian state must accept that Australia has national interests that are more important than the bottom line of a balance sheet. That is also as it should be.

Note from the Editor

The Age’s editor, Gay Alcorn, writes an exclusive newsletter for subscribers on the week’s most important stories and issues. Sign up here to receive it every Friday.