The average age to become a mother is now 31. That’s nothing says KATHRYN FLETT, who had a child at 42. Here she shares: The perils of being a ‘nan-mum’

At the age of 37, it was being described as an ‘elderly primigravida’ — the technical term for any pregnant woman over the ripe old age of 35 — on the hospital notes that kick-started my inevitable journey towards being a ‘nan-mum’.

By the time I ‘popped’ out my second beautiful boy at the grand old age of 42 (and ‘popped’ is very much a euphemism), the term ‘elderly’ seemed barely adequate; I was by now clearly, in the hospital’s eyes, a ‘nangravida’.

‘Nan-mum’ is a description I coined to describe women like me, women who when dropping their kids at school often get mistaken, on a bad day, for their children’s grandmother. On a good day, it’ll merely be an older auntie.

The majority of my girlfriends also had their kids in their 30s, so with my eldest I didn’t feel like a medical freak. Fewer were still at it in their 40s, however. 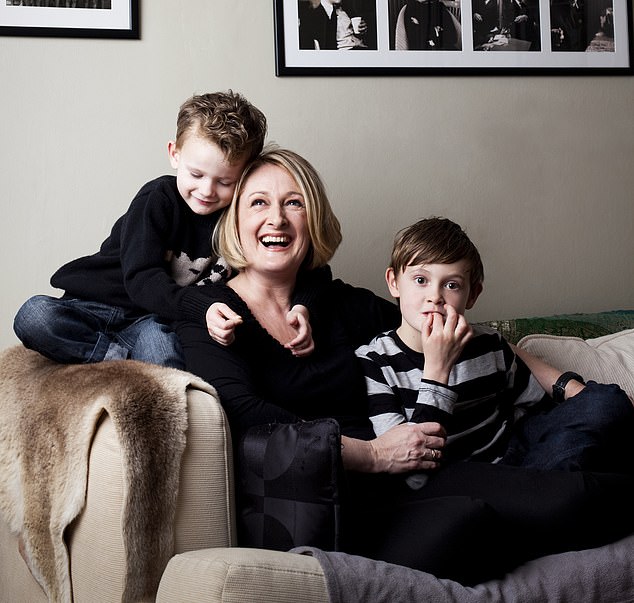 Kathryn Flett who gave birth to her second son at the age of 42, reflects on what it means to be a ‘nan-mum’. Pictured: Kathryn with her boys when they were younger

The average age of parenthood has been rising for years — and that’s for both parents. Last week, the ONS revealed the average age at which women gave birth in 2019 had gone up to 30.7.

Don’t ask me to crunch the numbers, however, given there were 679,106 live births in 2017, that’s . . . still quite a few mothers who, in 2021, will be dropping off their children at Reception for the very first time before they head straight to the hairdresser for a cuppa and a cry while their colourist cracks on with covering up the greys.

Age is ‘just a number’ and you’re ‘only as old as you feel’, right? That’s true. However, if you’re still doing night feeds in your 40s, you can easily feel like a septuagenarian, even before you look in the mirror the following morning and are reminded that, for its restorative qualities, a good night’s sleep is right up there with Botox — and so much cheaper.

I didn’t feel particularly nan-mum-ish in my late 30s or early 40s. I still scrubbed up OK and while I had a definite post-mum tummy it was — yay! — still pre-menopausal, so I also had a waistline. Even by my late 40s, I still felt comfortable in skinny jeans, and my high heels hadn’t yet started gathering dust.

Plus, there’s a lot to be said for great hair; a trip to my colourist and hairdresser, Joel, not only made me feel I was living my best life, but that I could, with the right lighting, feel 32 forever.

Others weren’t so easily fooled. The first time I noticed my ‘new-old’ status was when my youngest son was at primary school and I got chatting at the gates to the mother of one of his new friends as we arranged a play date.

I could see she was young — everybody was young — but it was months later when she revealed she was looking forward to the weekend when she’d be — sharp intake of breath! — celebrating her 30th birthday. I had just turned 50. (Postscript: later I met her mum, who was a year younger than me.) 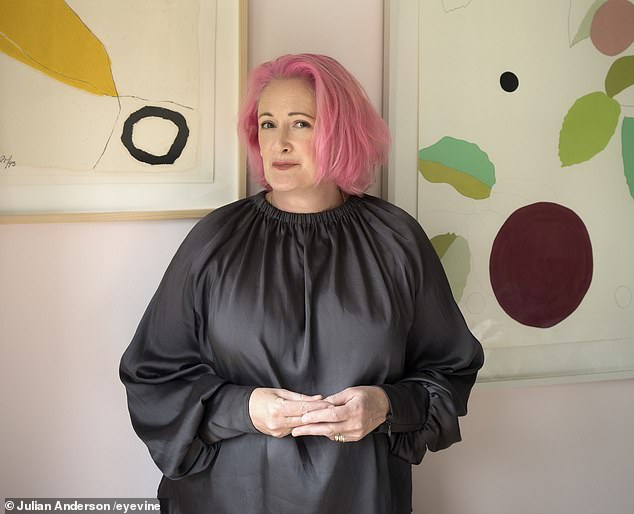 Reflecting on taking her youngest son to school, Kathryn (pictured) revealed while she was considering HRT, the younger mums were poppng out babies

While our lads had everything in common, we mums inevitably struggled for shared cultural references. There’s no point trying to connect with a 30-year-old about, say, being at Live Aid (yes, I was!) when it is literally a historical event that happened five years before they were born.

Five years before I was born, the average UK house price was £2,410, telecoms were revolutionised by the arrival of — woohoo! — direct dial telephone boxes and the biggest hit of the year was Cliff Richard’s Living Doll.

Meanwhile, hearing one of my son’s friend’s mums reminiscing about that time she saw the Spice Girls live for her eighth birthday inevitably saw me reminiscing about seeing The Osmonds when I was nine. In 1973. Which was 25 years before she was born.

‘Amazing!’ she said politely, pouring us a cuppa in her immaculate kitchen, ‘So who are The Osmonds?’

Inevitably, while I was considering HRT for my peri-menopause symptoms, the younger mums were popping out babies.

‘I have no idea how I’ll cope with the night feeds this time around,’ they’d share, wearily, from the aged vantage point of being 33, adding they ‘might just squeeze another one in!’ 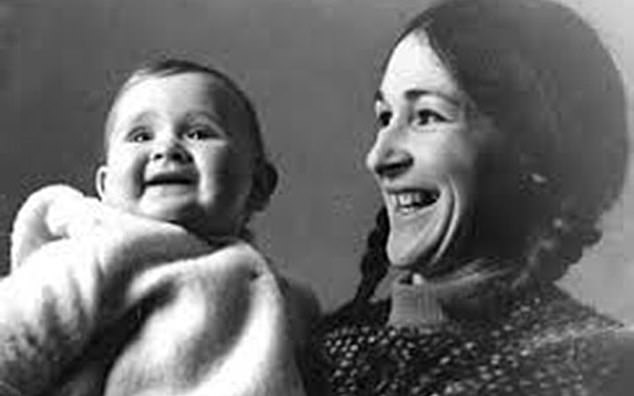 Kathryn said some may have ‘discovered’ their real age the hard way during lockdown, when ‘family movie nights’ descended into algorithmic power-struggles. Pictured: Kathryn as a baby with her mother

I had to bite my lip in order not to say that a) night-feeds are a doddle next to night-sweats and b) attempting to ‘squeeze another one in’ five years before I’d even had my first meant they’d probably be fine.

Maybe, like me, you eventually ‘discovered’ your real age the hard way, during lockdown, when cosy enforced ‘family movie nights’ in front of the TV descended into algorithmic power-struggles. Your subscription channels’ recommendations included Dirty Dancing and The Right Stuff, while the kids refused to countenance anything without Marvel in the title. As you politely point out, ‘Marvel don’t really make films, they make comics’, which causes your offspring to roll their eyes and head upstairs for a solo YouTube/Xbox binge. Welcome to my nan-mum world.

Later, when I shouted up the stairs, ‘Anyone want Horlicks?’, I was, of course, ignored — partly as there isn’t a teenager left on the planet who wants Horlicks, but also because even the loudest-shouting nan-mums do not have the ability to penetrate AirPods.

So, what do nan-mums bring to the ‘party’, precisely? Though obviously I use the word ‘party’ in its loosest sense, because who can remember the last time they went to one? 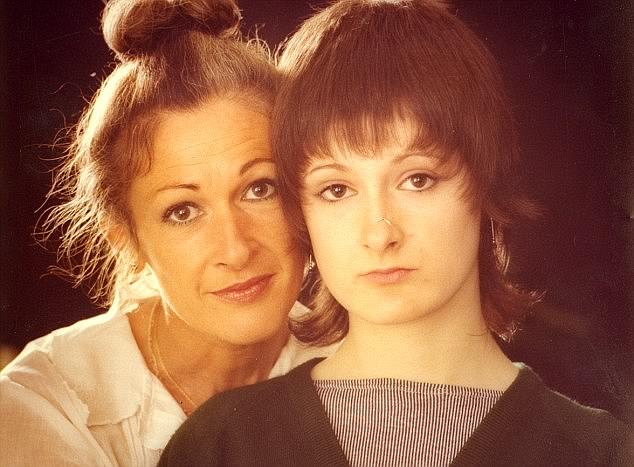 Kathryn revealed her sons were equally delighted and appalled, when she began buying ‘streetwear’ for herself. Pictured: Kathryn as a child with her mother

Well, there’s a lot to be said for the ability to effortlessly (as opposed to wilfully, which is just mean) embarrass your children by the mere fact of your physical existence. This could be anything from just looking a bit old and tired (which at least you can blame partly on them), or wearing ‘old lady’ shoes — in my case, the ‘wrong’, but very comfy, trainers.

However, far more successful, is when you stray onto the kids’ hallowed turf.

For example, when, a few years ago, my teenagers started expressing an interest in ‘streetwear’, I expressed even more of an interest and started buying some myself. The boys were equal parts delighted and appalled.

Perhaps that’s why, pre-lockdown two, I exorcised my ‘semi’ (one down, one to go) empty nest syndrome by heading up West to visit Joel and a super-cool new colourist.

After which appointment I emerged with a look recently endorsed by arguably the ultimate nan-mum, 62-year-old Madonna.

Yes, I’m out, proud and definitely very loud: turns out that the revenge of this particular nan-mum is a dish best served a Crazy Colour shade of hot pink.

Oh, and just in case you’re wondering, yes — amazingly — the kids quite like it.

Though it is, of course, technically a ‘pink rinse’. Luckily they’ve never heard of Mrs Slocombe.