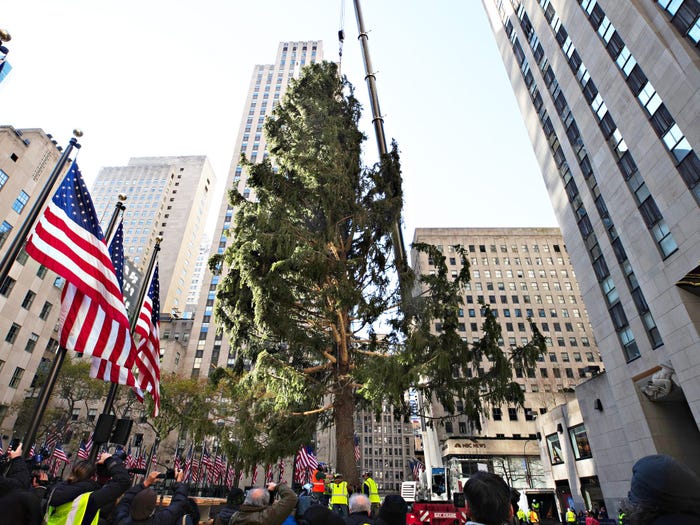 As much as we want it to be, this year's scraggly Rockefeller Christmas tree is not a metaphor for 2020.

The tree from Oneonta, New York, didn't look so great when it arrived in NYC on November 14. Some Twitter users joked that the tree is fitting for this disastrous year we've had, while others compared it to the sparse sapling in "A Charlie Brown Christmas."

But the tree may not be as metaphoric as we want to believe.

EB Kelly, a managing director at the real estate firm that owns Rockefeller Center, told The New York Times that the 2020 tree's scraggly look is typical for a Rockefeller Christmas tree after being wrapped up tightly for a long drive to New York City.

But the tree will be beautiful, she said, once the branches settle down into their natural position.

Photos of Rockefeller Christmas trees over the years show that they typically arrive with bedhead after being wrapped up for the journey, but by the time of the lighting, they always look beautifully lush.

For example, 2019's Rockefeller Christmas tree didn't look so great upon arrival either. It came from Florida, New York, per CNN Travel, and had been wrapped in rope for a 1.5-hour drive.

But once it was time to light the tree, its branches returned to their natural state, and the tree looked normal.

Even a decade ago in 2010, the Rockefeller tree had a rough start to the season. It came from Mahopac, New York, The New York Times previously reported. Mahopac is about 1.5 hours from NYC by car.

In 2006, the tree arrived looking halfway bald. It came from Ridgefield, Connecticut, per Gothamist, a 1.5-hour drive from New York City.

The tree came from Flanders, New Jersey, after surviving Hurricane Sandy, The Huffington Post reported. Flanders is about an hour from New York City by car.

So this year's tree is probably going to be less like 2020 than we thought. But we'll find out for sure on December 2, when the 2020 Rockefeller Christmas Tree lighting takes place.

This year, the public cannot attend the lighting due to the ongoing pandemic, but it will be streamed on NBC.