Samantha Morton is heralding in a new dawn of The Walking Dead as she takes on the role of the show’s latest villain.

She plays Alpha, the leader of The Whisperers – a new group of survivors which have just been introduced.

It comes at a crucial time for the show which recently lost its main character Rick Grimes, played by fellow Brit Andrew Lincoln.

Rather than see it as a negative, Samantha says his departure is an inspiration for her.

“His legacy and what he has created is incredibly inspiring, he set the standard very high,” she tells Radio 1 Newsbeat.

“I feel like this is a really special baby that I have been handed and I need to be really careful with it.”

Warning: The rest of this article contains spoilers 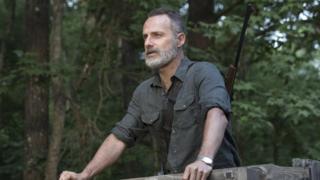 The Walking Dead has suffered from a dip in ratings and concerns were also raised that the show wouldn’t be as strong without its lead character.

But with a new showrunner called Angela Kang and a brand new set of baddies, it looks like The Walking Dead is far from limping off.

“The show is bigger than any one part and we serve the show and we are all a family in that way,” Samantha explains.

“You very quickly realise it is a well-oiled machine, they know what they are doing and they do it incredibly well.

“Just because the show has been going on a long time it doesn’t mean that people aren’t still at the top of their game.

“If anything the stakes are higher, there is a huge legacy there that needs to be carried on, it’s a honour to be a part of the show.”

Ratings dropped around seasons seven and eight but with Angela Kang at the helm for season nine, it’s seen a resurgence.

For the first time, we’re taken back to before the zombie apocalypse, which brings us something completely new.

It’s quite a role for Samantha to take on considering the entrance of the last villain, Negan, was one of the show’s most memorable episodes.

“I’m trying not to dwell on that too much,” she says. “And I don’t think Alpha is particularly aware she is a baddie.

“She is just following her principles and living her life the way she thinks she should live her life. I think there is a conviction, a power and a femininity in that.”

The Whisperers bring a whole new threat to the survivors living at Hilltop, The Kingdom and Alexandria.

They’re a mysterious group who disguise themselves with walker skin to blend in with them and therefore do not get noticed by them.

“What Alpha does is really clever, why would you not do that?” laughs Samantha.

Now, if you thought the cast sit around discussing what they would do in the event of a zombie apocalypse, bad news.

“No, we don’t actually, or at least not when I have been around,” Samantha tells Newsbeat.

“I have never thought about it, but my family were in the military so I think I’d be alright.

“I would do the survival thing and copy what Alpha does, it’s just so clever.”

The Walking Dead continues Mondays at 9pm on FOX.