The host of the 40-nation climate summit, US President Joe Biden, opened the event by urging all the leaders to pledge to “overcome the existential crisis of our time”. It was “a moment of peril, but also a moment of extraordinary opportunities”, he said on Thursday night Australian time.

The next speaker was the secretary-general of the UN, Antonio Guterres. “We are on the verge of the abyss.” 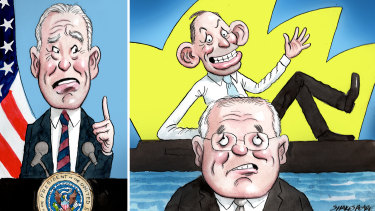 After America’s four years of climate absenteeism under Donald Trump, several leaders expressed relief at Biden’s activism in leading the planet back from the edge. With the world on a trajectory to warm by 3 degrees, the collective effort has to bend it to hold warming to a maximum of 1.5.

German Chancellor Angela Merkel described the task ahead as “Herculean”.

Scott Morrison was excluded from the list of almost 80 leaders invited to speak at a climate summit hosted by Britain’s Boris Johnson in December last year. Organisers made clear that Australia lacked the climate action to earn a place.

Morrison did better this time. Biden gave him the floor as speaker number 22 out of 40 – just after Bhutan and just before Antigua and Barbuda. A senior Biden administration official had anticipated Morrison’s remarks by telling reporters in a background briefing in Washington that Canberra’s efforts were “insufficient”. And Morrison didn’t fail to disappoint.

After hearing some of the world’s most important developed nations pledging dramatically greater cuts to carbon emissions, there was nothing Herculean about Morrison’s performance.

Each of these promises represents an approximate doubling of those countries’ planned cuts. The European Union said it would increase its planned cuts from 40 per cent of its 1990 level by 2030 to a new target of “at least” 55 per cent. Justin Trudeau committed to cutting Canada’s by 40 to 45 per cent by 2030, an increase from the previous pledge of 30 per cent.

Morrison made no change to Australia’s commitment. Which happens to be the one made by Tony Abbott’s government for the Paris Accord – that Australia would reduce carbon emissions by 26 to 28 per cent from 2005 levels by 2030.

In other words, Abbott is still setting Australia’s climate ambitions. He set this target to keep Australia in step with the US. But Washington now has left Canberra far behind. On that measure, Tony “climate change is crap” Abbott was actually more progressive than Scott “lump of coal” Morrison.

Worse, Morrison’s chosen backdrop for his address to the leaders’ summit was a giant picture of the Sydney Opera House. The Opera House is an emblem of Australian boldness and ambition. Morrison used it to deliver a message of Australian timidity and complacency.

Does it matter? Australia wasn’t the only country this week to offer no advance on its emissions target. The biggest emitter of all, China, is still promising to “peak” its overall carbon emissions by 2030. Despite the gushing credulity with which China’s climate promises are met by most of the West, this simply means it will continue to increase its carbon pollution output every year for another nine years.

And what’s the value of a promise in any case? The US under Trump abandoned all the promises made by Obama and said it would withdraw the US from the Paris Agreement altogether. And Beijing spectacularly broke its solemn international commitment to protect Hong Kong’s liberties under the “one country, two systems” policy.

Besides, does Canberra need to make any new promises? Every Australian state has undertaken to cut emissions to net zero by 2050, consistent with all the major developed countries’ commitments. If every state delivers on this, do we even need the federal government to make this pledge?

The eminent Australian economist and author of the Garnaut Climate Change Review, Ross Garnaut, says it matters a great deal. He made this withering three-part assessment of Australia’s position on Friday morning:

First: “It is not sustainable geopolitically for Australia to have the world’s most difficult trade relationship with China and to stand in the path of a centrally important domestic and foreign policy goal of the US, the UK and the European Union,” Garnaut told me.

Second: “It is not sustainable economically for Australians to be denied opportunities that could help us to full employment and rising incomes after the pandemic recession.”

Third: “It is not sustainable politically for a conservative government permanently to deny Australian farmers access to international prices in a new rural industry that could soon be bigger than the wool industry.”

And while Morrison emphasises the need for more technological progress to tackle climate change, Garnaut says that this is a red herring: “The technologies are available now for us to join the US and the average of the developed countries this year in a commitment to 52 per cent reduction in emissions from 2005 levels by 2030 and to zero emissions by 2050, while accelerating movement to full employment with rising incomes. The benefits would be disproportionately concentrated in rural and provincial Australia.”

Each point needs a brief explanation. First is the geopolitics. Why is Morrison’s non-co-operation unsustainable? Because there’s a simple element of reciprocity to relationships with friends – if Canberra expects the US, Britain and Europe to help it cope with Beijing’s intimidation and coercion, it needs to help those powers with their priorities. And climate change is a top priority for all of them. The US President doesn’t use the words “existential crisis” lightly.

Second, what does Garnaut mean when he says Australia’s current position is denying it more jobs and rising incomes? “Income growth has to be sustainable – and it’s only sustainable if the right proportion of income is coming from exports. Exports have to grow faster than overall GDP to have sustainable rising incomes. At first sight this is hopeless, because of three big headwinds.“”

First is that 22 per cent of Australia’s exports are coal and gas and they are going to go into a slow but real decline. Second is that “problems with China mean we don’t get the huge benefits from their economy that we got after the global financial crisis. Third is we have a crippled financial base of what had been our most rapidly growing industry before the pandemic – education services – and we won’t be able to repair it even after the border opens again.” Garnaut reminds us that universities were denied JobKeeper.

“We’ve got to have faster growth in exports, and we can.” The opportunities created out of new climate policy are “so big they outweigh all these headwinds”.

One example is carbon credits. As he sets out in his new book, Reset: Restoring Australia after the Pandemic Recession, Australia’s farmers have tremendous opportunity to earn carbon credits from soil carbon and carbon held by plants. This is the new rural industry – potentially bigger than wool – that he was referring to. But there’s a catch: “We can’t get into official carbon markets like the EU’s unless we have firm emissions targets that the world accepts. Because what you trade in credits is the excess above your targets. And if your targets are too low you won’t be accepted as a credible power.”

Another example. Energy-intensive manufacturing. Australia’s immense solar resources could make it the world’s lowest-cost producer of electricity. Garnaut’s earlier book, Superpower, explains how Australia could use this advantage to become the world’s leading manufacturer. 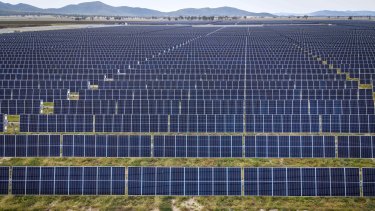 Photovoltaic modules at a solar farm on the outskirts of Gunnedah in NSW.Credit:Bloomberg

What’s more, Garnaut says, there are three straightforward ways for Australia to cut its emissions pretty dramatically: “The first thing you do is require all mines to reduce fugitive emissions and buy carbon offsets from the farm sector. Those fugitive emissions are about 10 per cent of Australia’s total emissions.” Second, “do what everyone else is doing on electric vehicles”. Third, “remove bottlenecks in the renewable energy sector”, mainly by fixing problems with the grid and accelerating investment in storage – pumped hydro and batteries.

These three measures alone could get Australia to a 50 per cent cut in emissions by 2030, Garnaut calculates, matching the Biden pledge. And generate major economic growth in the process.

Britain’s Conservative Prime Minister, Boris Johnson, exploded the political myth that has helped keep Australia paralysed for a decade. “Don’t forget that the UK has been able to cut our own CO2 emissions by about 42 per cent on 1990 levels and we’ve seen our economy grow by 73 per cent,” he told the leaders’ summit. “You can do both at once.”

Change requires leadership. Morrison intends to announce a new, more ambitious emissions target later this year, in time for the Glasgow summit in November. He hinted as much this week. Garnaut is right – Morrison’s current position is unsustainable, and he’s not going to try to sustain it for much longer.

But he’s moving at his own pace – excruciatingly slowly. Like all of Australia’s federal MPs, Labor and Coalition, the Prime Minister is still recovering from the trauma of the Abbott-led climate wars. Ross Garnaut’s punchline: “The PM says he wants to get to net zero by 2050, so let’s get behind him.”