Tilly Lawless was 19 when she moved from northern NSW to study history at the University of Sydney. Like many students, she supplemented her scholarship with cash-in-hand bar work and babysitting. By her second year of study she was struggling financially and needed to find lucrative employment that would not cut too much into her study time, minimising the risk of losing the scholarship if her grades suffered.

So, she called an escort agency and got an interview. “I’d probably have called it prostitution because I wouldn’t have known the correct terminology,” says Tilly, now 28. She’s been a sex worker for the past eight years. 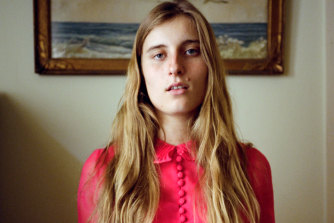 Tilly Lawless’ book is loosely based on Tilly’s own experiences: she and her creation both identify as lesbian and have predominantly male heterosexual clients.Credit:Ellen Pearson

Sitting in her inner-city home in front of shelves crammed with books, her long blonde hair piled in a high ponytail, she recalls that the first agency was “so not my vibe” because management expected its workers to wear full-face make-up.

So, after two months, she took a job at a massage parlour which “had a wonderful culture in the girls’ room, a lot of older women who really looked after me and told me what to do in the room [with clients] and how to assert my boundaries”.

Massage parlours have base rates, on top of which sex workers decide what to charge a client for additional services, guided, she admits, by “intuition and what you feel like doing in the moment, and also how drunk he is”.

She elaborates: “How much can you get away with charging him? These days, because I just do brothel work and escorting, the price is already set and I don’t get as much leeway.”

Words have long been Tilly’s craft, and she recently published her first novel, Nothing But My Body. Its 26-year-old narrator is a working-class sex worker in Sydney, known to her clients by the pseudonym Maddy.

“I was just a country girl who moved to the big city with nothing but my body, earned it all toes down and legs up,” says Maddy. “The ka-ching of my pussy its own kind of art, just as valid as the art pumped out by middle-class kids with a family and inheritance waiting.”

Maddy is consistently empathetic, interested in our shared humanity regardless of people’s sexual orientation or gender identification, their looks, their race or whether they pay for sex.

The story is loosely based on Tilly’s own experiences: she and her creation both identify as lesbian and have predominantly male heterosexual clients. One character, a 30-year-old man with an intellectual disability, is especially poignant as he constantly shields his face during his session with Maddy, apologising because he is not good-looking. Maddy muses that her own body is seen by some as “abject”, a “vehicle for contagion and public health risk, used and abused, devalued and discarded”.

Tilly, who owns a spangly outfit proudly embroidered with the words “femme whore”, has spent the past eight years trying to overturn negative public perceptions of sex workers through her social media posts and website columns.

The novel’s aim, by contrast, is to treat sex work as a backdrop for an examination of “the queer community, mental health and the dangers of romantic obsession”. Each chapter is devoted to a day in Maddy’s life and, over the course of the story’s eight days, she finds a supportive “nirvana” and a new family built on friendships in the queer and clubbing communities.

Tilly spent the first five years of her life in the NSW Hunter Valley, then the next five in Rozelle, in inner Sydney. Between the ages of 10 and 19, she lived in Bellingen, on the state’s Mid North Coast, and went to school in “deeply conservative” Coffs Habour. “I consider myself a country girl because more of my growing-up years were spent in a country town,” she says.

Some of her extended nuclear family are Christians who were “confronted” by Tilly’s coming out as gay at 16. Not that it made much difference: “I was already an outcast, put it that way.” When they heard she had become a sex worker, they began to pray for her, she says. But Tilly’s estrangement from that side of the family precedes her time in the sex industry.

Her “really wonderful” father, who is in his 70s, took a few years to accept his daughter’s occupation but is supportive and will likely read the book. “He called me the other day, panicking a bit: ‘Have you realised what responses you’re going to get to this book?’ ”

She laughs. “I said, ‘I’ve already been talking about this stuff on Instagram.’ ” 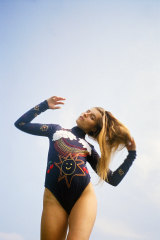 Tilly stresses the belief that “sex workers aren’t always passive victims” who have been forced into the work, or need to be saved.Credit:Chloë Nour

Tilly says that “70 to 80 per cent” of her clients are “really nice”, and like Maddy in the book, she doesn’t think of them as “johns”, a term she says is used to “denigrate and homogenise” those who pay for sex. Rather, she sees paying for sexual and emotional intimacy as a means of fulfilling a “basic human need”.

But there have been occasions when she’s felt unsafe, such as the time she found a client in a hotel room high on ice. He wanted to bring his drug dealer up to the room. Tilly quickly exited.

She adds that the times she’s been “really scared” have mostly occurred escorting. “When you’re in a brothel there are other women next door and you feel like they can hear you.”

Sometimes she leaves her shoes on during a session with a client so she can “kick someone off if I get a suspect vibe from them”. She says that experience has endowed her with a “shrewdness” to quickly assess character.

“But,” she adds, “I have not been any more scared at work than I have been as a woman alone on the street.”

In the novel, Maddy has agency, consistent with Tilly’s belief that “sex workers aren’t always passive victims” who have been forced into the work, or need to be saved. “They aren’t always slaves to the patriarchy,” says Tilly.

Tilly, like Maddy, hopes one day to have a child, using donor sperm and child-raising help from her family of queer friends. She is currently single. Past girlfriends have been “generally cool” with her sex work: jealousy only entered the picture when she dated another sex worker who was envious if Tilly earned more than she did.

When she started sex work at 20, Tilly thought she’d quit the industry by 30. “But the older I get, the less inclined I am to leave,” she says.

“I make better money now than I did at 20 because I have more confidence and I can read what clients want.”

She laughs. “Why leave when I’m getting so good at it?”

This article appears in Sunday Life magazine within the Sun-Herald and the Sunday Age on sale August 22. To read more from Sunday Life, visit The Sydney Morning Herald and The Age.