A newlywed who lost her engagement and wedding rings in the sea resorted to a ‘hero’ on-call treasure hunter – who miraculously located them more than 150 feet off the coast.

Jodie Brown Clayton, 26, had been frolicking in the waves at Canford Cliffs beach in Poole, Dorset, when the pair of precious rings slid off her finger on Sunday afternoon.

Beautician Jodie and her scaffolder husband Oli Clayton, who got married 11 months ago, both frantically combed the sea-bed and took turns underwater in their search, to no avail.

The couple had given up hope, but later that evening metal detectorist Richard Higham unearthed the platinum and diamond rings. 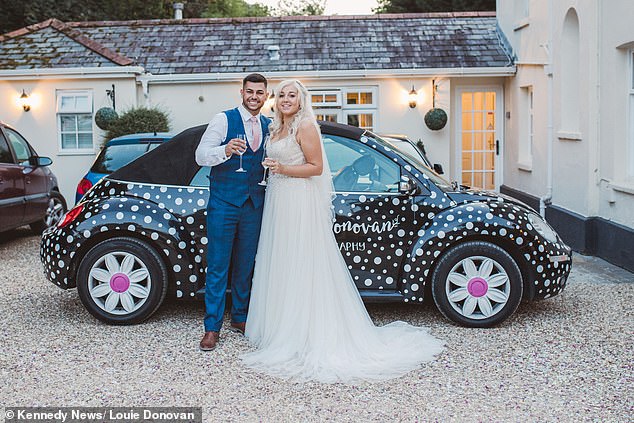 Jodie Brown Clayton, 26, had been frolicking in the waves at Canford Cliffs beach in Poole, Dorset, when the pair of precious rings slid off her finger on Sunday afternoon. She is pictured with scaffolder husband Oli Clayton

Oli and Jodie, who got married 11 months ago, both frantically combed the sea-bed and took turns underwater in their search, to no avail. The couple had given up hope, but later that evening metal detectorist Richard Higham (pictured with Jodie) unearthed the platinum and diamond rings

After learning that Richard, who lives in nearby Swanage, specialises in reuniting people with their lost jewellery, the couple got in touch and begged for his help.

Armed with a wetsuit, metal detector and scoop, Richard methodically searched the area more than five hours after the rings disappeared and miraculously unearthed the pricey jewellery just before the tide turned and took them forever.

Jodie, from Poole, Dorset, said: ‘I just love those rings and was devastated when I lost them.

‘Even though it’s “only” jewellery they’re so precious to me and my wedding ring was blessed, it was absolutely heartbreaking.

‘I was so gutted, I ever thought I’d see them again.

‘Unfortunately we lost my nan six days before our wedding, she absolutely loved my engagement ring and that all went through my mind – that she saw it and loved it too. 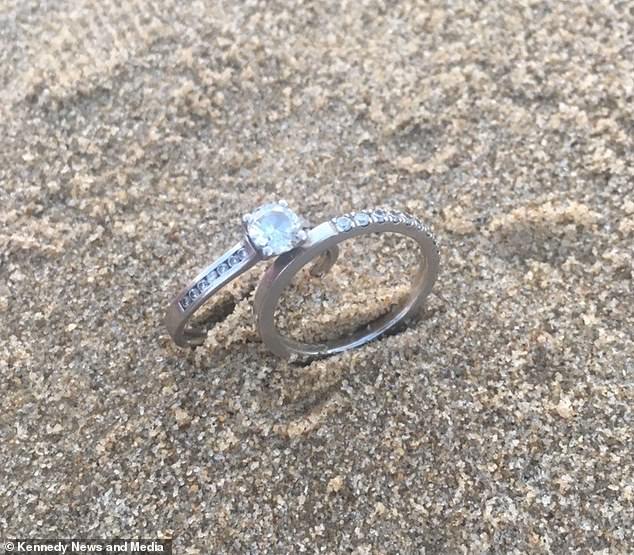 After learning that Richard, who lives in nearby Swanage, specialises in reuniting people with their lost jewellery, the couple got in touch and begged for his help. He was able to find the rings, they are pictured in the sand

‘It was horrible even saying what had happened to my parents, I just kept going over and over the moment they slipped off and blamed myself.

‘It still makes me feel sick thinking about it now to be honest.’

The couple had been enjoying the glorious weather at the beach since 7.30 in the morning, in a bid to beat the crowds.

They were later joined by two friends and were playing catch with the ball and volleyballing it to each other in waist-deep water at 3.30pm when the rings slid off her finger. 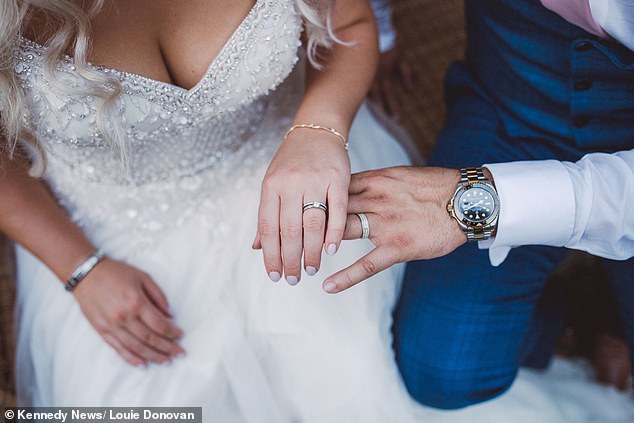 Jodie said she ‘loved those rings’ and she ‘was devastated when she lost them’. She is pictured showing off her ring on her wedding day

Jodie said: ‘I didn’t take my rings off before going into the water as I thought they were safer with me than being left somewhere.

‘We had our honeymoon in Mexico and I was in the pool and the sea there all the time and it was absolutely fine.

‘We’d been in the water about 20 minutes and this one time the foam ball came at me towards my left hand.

‘I hit it and I was pretty sure I felt them come off, I looked down at my hand and I was just in complete shock. 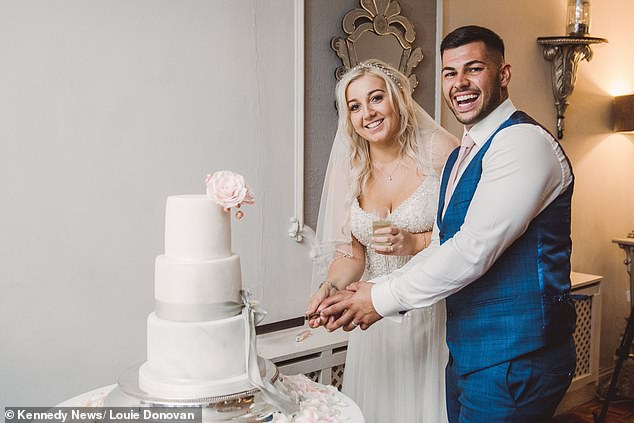 After searching, the couple left the beach upset and  were due to attend a family barbecue at Jodie’s parents’ that evening, but were too anguished to enjoy it. Jodie and Oli are pictured on their wedding day 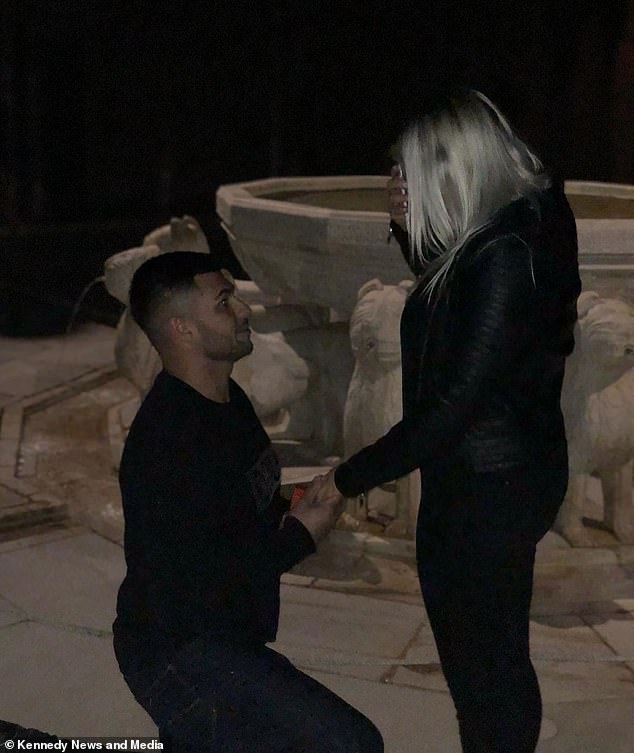 Oli is pictured proposing to Jodie. The couple had their honeymoon in Mexico where Jodie wore her ring in the pool without losing it

‘I turned to my husband and our friends and said “my rings, my rings, please get them, they’re gone, they’re not on my hand”.

‘Then I just started crying. We both put our heads under the water trying to see them hoping the diamonds would shimmer.

‘We found someone on the beach with goggles and a little net that we tried to sieve the sand through. We looked for 20 minutes but then I was too upset and I just had to leave. 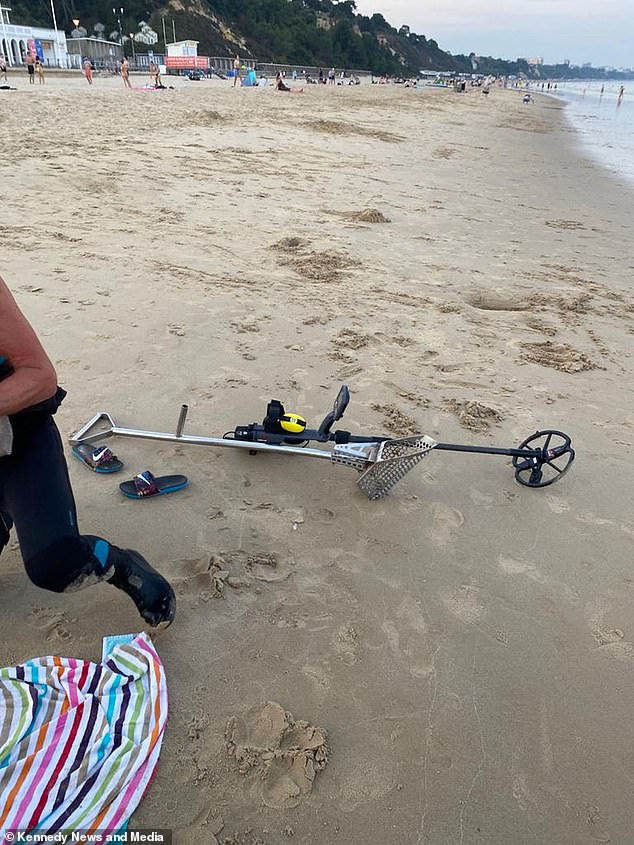 Pictured: Richard’s detectorist equipment.  Due to the heavy traffic, commercial pilot trainer arrived by ferry and was given a lift to the stretch of beach where the rings disappeared by Oli. Richard methodically swept the area with his Minelab CTX3030 metal detector and used beach hut markers as the starting point on his hunt

‘It was so hard to get out of the water and leave them behind, it was horrible.

‘Our friends stayed another hour but unfortunately couldn’t see them.’

The couple were due to attend a family barbecue at Jodie’s parents’ that evening, but were too upset to enjoy it.

After tearfully telling family members that her precious rings had disappeared, Jodie’s step mum Carol Dyke, 58, sent a group message to friends in the area sharing her predicament – and discovered Richard.

Jodie said: ‘My step mum wrote in a Whatsapp group to her girly friends saying I’d lost my ring in the sea and was devastated. 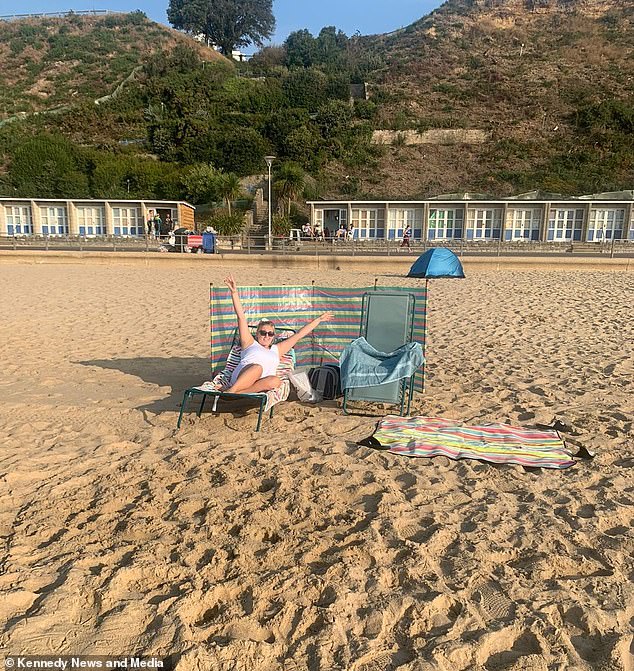 Jodie is pictured on the beach over the moon after her rings were discovered. She said she was so pleased she ran into the sea and hugged Richard with her dress still on

‘One replied saying she’d read about a man who found someone’s ring and sent a link to the Ring Finders website.

‘I was so devastated I thought there was no hope but my mum called him straight away at 5pm.

‘I went back down to the beach at 6.30pm as I was worried other metal detectors who go to the beach would get there before us and I waited there until Richard arrived just after 8pm.’

Due to the heavy traffic, commercial pilot trainer Richard arrived by ferry and was given a lift to the stretch of beach where the rings disappeared by Oli.

Richard methodically swept the area with his Minelab CTX3030 metal detector and used beach hut markers as the starting point on his hunt. 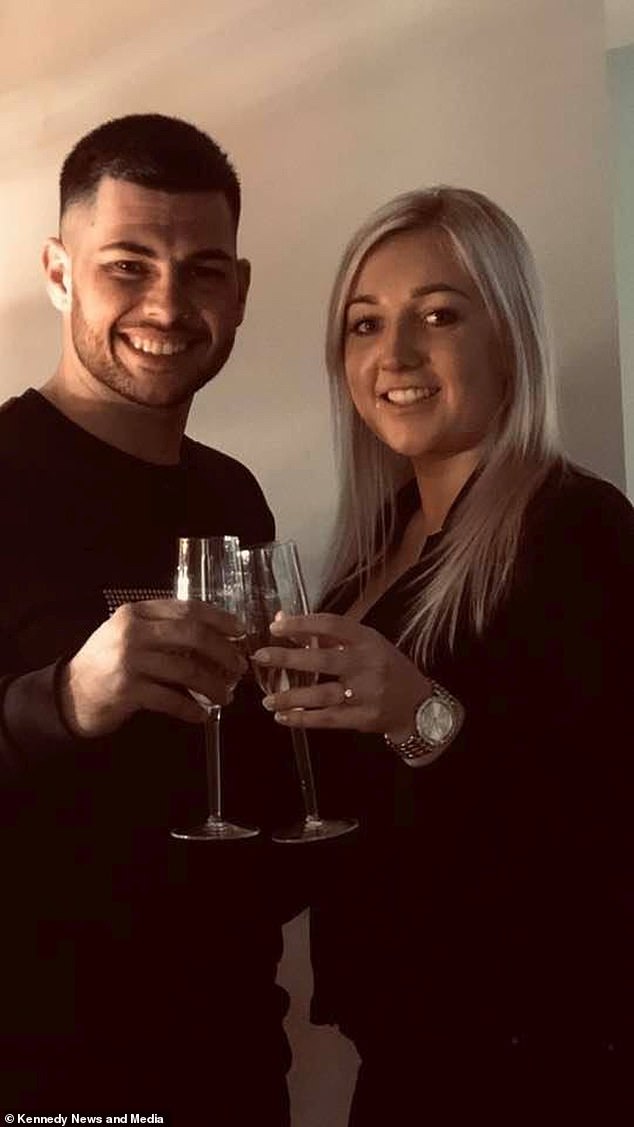 Jodie and Oli are pictured celebrating their engagement. The lost and discovered ring was made from diamond and platinum

Jodie said: ‘When I was in the sea and felt the rings come off, I looked for a marker [on the shoreline] and realised I was three beach huts in.

‘If I hadn’t have looked at that I really think we would never have found them.

‘Because the tide was going out it was really hard to judge where my waist height would have been at that time.

‘He started off very shallow and used the scoop to mark out where he was going.

‘He didn’t dig at all for ages, he just kept going out further and did a sweep of the area. 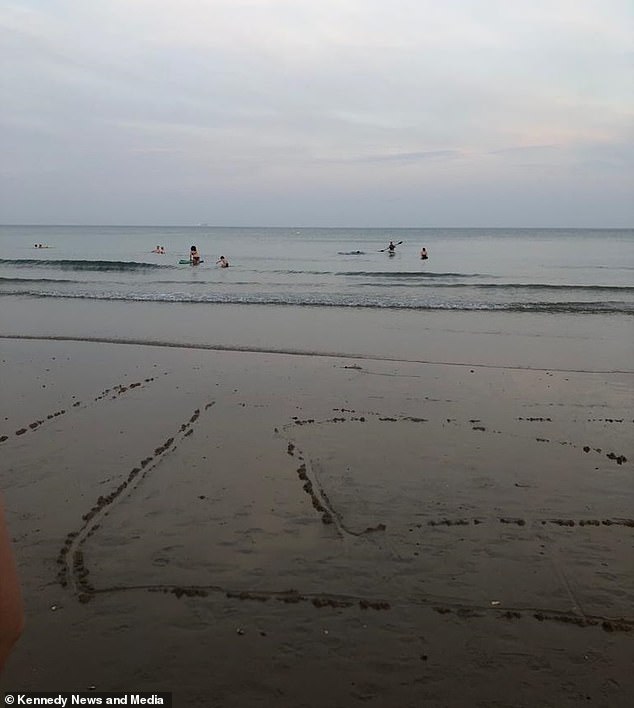 Pictured: The stretch of beach where Richard searched to find the ring. Around 20 minutes after Richard starting hunting for the rings he beckoned to Oli and pointed into his scoop showing him Jodie’s wedding ring

‘I stood on the shoreline with my mum and step mum just hoping and praying and crying.’

Around 20 minutes after Richard starting hunting for the rings he beckoned to Oli and pointed into his scoop showing him Jodie’s wedding ring.

Jodie said: ‘Oli shouted over “Jodie, he’s got your wedding ring”. I was in bits, I couldn’t believe it, he found it in waist-deep water.

‘It makes me shiver now just thinking about it.

‘I put it on my finger, turned around and showed my mum and my step mum and it was like something in a film – we screamed and I ran to them and we had a massive hug.

‘Two minutes later my husband held out his hand and showed me my engagement ring. I couldn’t, and still can’t, believe it.

‘It’s a miracle, it’s unbelievable. It was just an incredible moment, we were all overwhelmed.

‘When Richard found my rings I went out into the water in my dress and I just jumped on him.

‘You could see on his face he was absolutely thrilled for us. 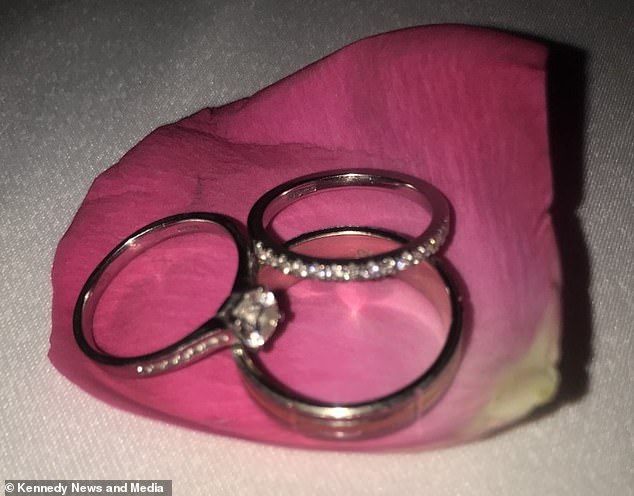 Safe and sound! Richard discovered the rings and returned them to shore. Also pictured is Ollie’s wedding ring

‘I really think someone was looking down on us that day.’

Thrilled Jodie offered Richard the cash in her wallet and promised him even more, but was stunned when he would only accept £5 to cover travel expenses and instead requested an animal charity donation.

Jodie said: ‘Because I was at the beach all day I didn’t take much money with me.

‘I offered Richard all the money I had, which was only £35, and said I would send more money but he wouldn’t accept it.

‘All he would take was £5 saying that it covered his ferry fare there and back and his petrol and parking. I don’t believe that would have even covered that.

‘He asked that we donate to Margaret Green Animal Rescue, which we did the next day.

‘They were ecstatic, they knew Richard and said he’d done it before. 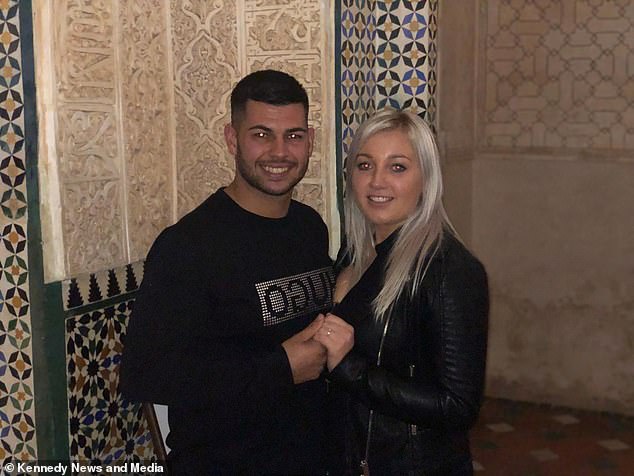 Jodie and Oli are pictured the night they got engaged.  Delighted Jodie is sharing her story so that anyone else in a similar predicament knows there is hope for being reunited with precious items

‘I just can’t believe it and I keep looking at my hand and kissing my ring – I’m not ever letting these go.’

Delighted Jodie is sharing her story so that anyone else in a similar predicament knows there is hope for being reunited with precious items.

Jodie said: ‘You hear about people losing their rings but you never think it’ll happen to you but unfortunately accidents happen.

‘Richard’s an incredible bloke and it makes you feel very positive that there are people like him in the world.

‘To be able to tell people about the things Richard does with Ring Finders will make people aware and hopefully help other people.’

Richard, from Swanage, Dorset, said: ‘I think all human nature knows the positive side of being kind.

‘I feel very humble and proud to say that I was the one that prevented them from feeling very, very down and negative.

‘From all my collections, the biggest treasures I have are all these happy, smiling faces I have seen from people. I still have that warm feeling in my heart and stomach.’