It’s a family affair! All of Donald Trump’s adult children accompany him to the State Banquet at Buckingham Palace – and mingle with the royals while dad does his job

And while none were called upon to pose for pictures with their dad or the Queen, they all made sure to pop up behind the pair in photos taken at the event.

Don Jr., 41, Ivanka, 37, Eric, 35, Eric’s wife Lara, 36, and Tiffany, 25, each dressed up for the fancy fete and could be spotted milling about and smiling in the direction of photographers. 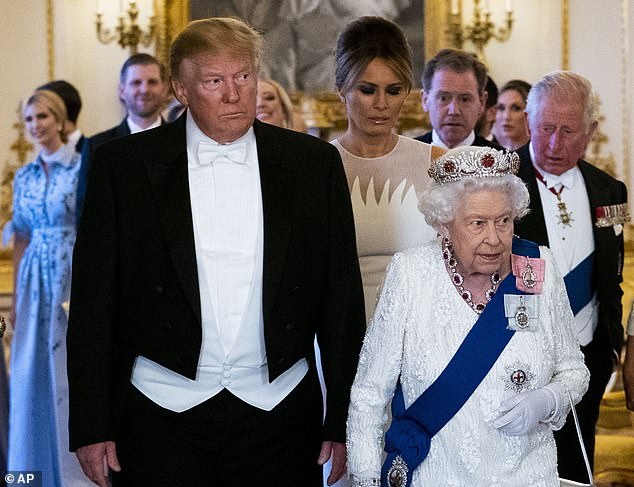 The President attended a State Banquet at Buckingham Palace in London on Monday evening, and his four adult children all tagged along (pictured in background are Ivanka, Eric, Tiffany, and Eric’s wife Lara) 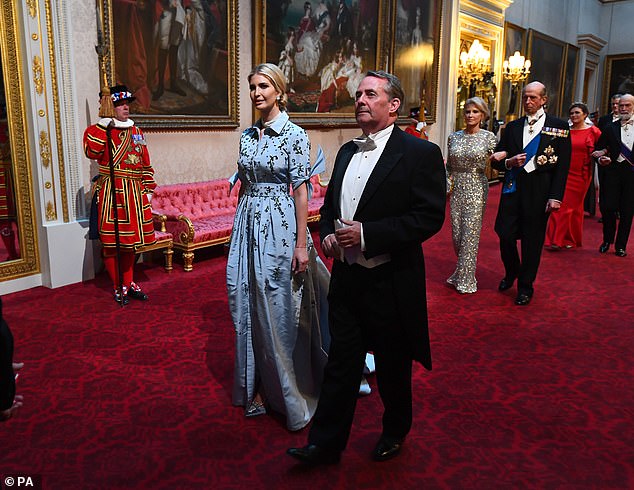 Ivanka, dressed in a blue Carolina Herrera was accompanied in by Secretary of State for International Trade, Liam Fox 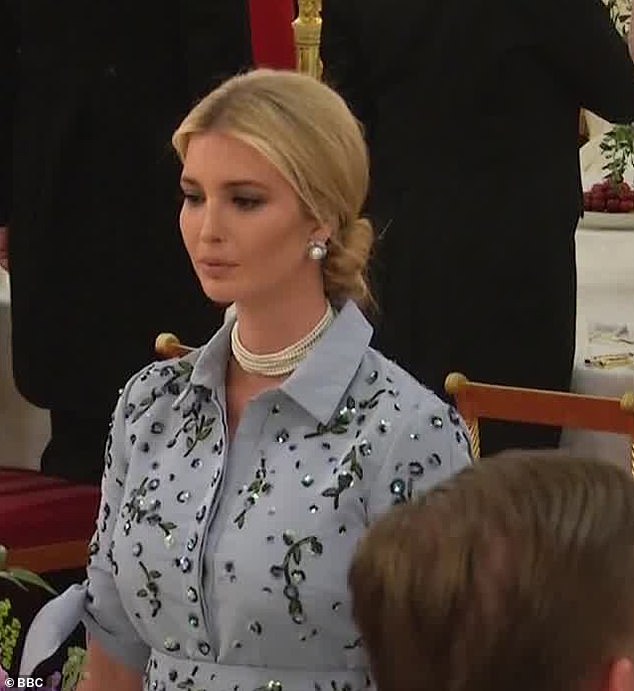 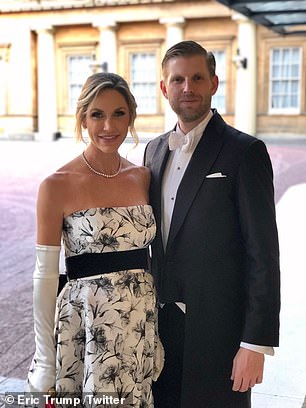 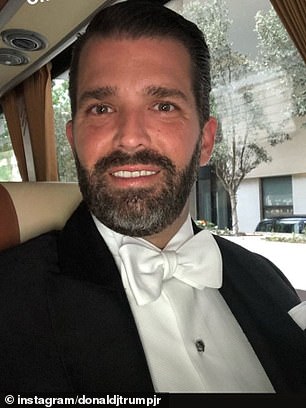 Eric Trump shared a snap with his wife Lara ahead of the event (left) and Don Jr. smiled in the back of a van as he showed off his tux on the way there (right) 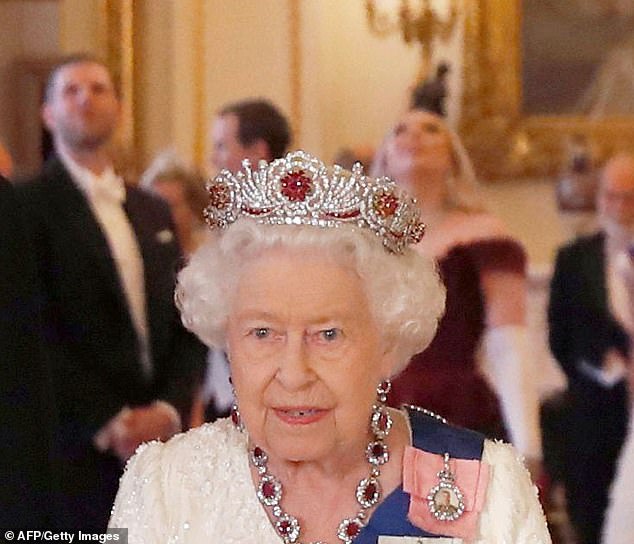 Tiffany is pictured staring up at the ceiling beside her brother Eric, while the Queen poses for pictures in the foreground

As Trump and the Queen walked side-by-side through the doors into the Music Room, they were immediately followed by Melania, Prince Charles, and Camilla, Duchess of Cornwall.

But several feet behind them in the room they were leaving, Trump’s children could be seen talking and turning their faces toward the shutters of the press.

Ivanka, dressed in a blue Carolina Herrera, smiled beside her brother Eric, who also grinned as he looked out of the room.

In other photos, Ivanka can be seen standing next to her husband Jared Kushner while Tiffany, dressed in a red ball gown with full-length white gloves, stood nearby looking up at the art on the walls.

Within feet of her was her big brother Don Jr., who stood awkwardly near the Duchess of Cambridge but didn’t appear to be speaking to her.

Trump’s only child missing from the event was his youngest son Barron, 13.

And while the adult Trump kids may have been new to mingling with royals, they were really thrust into the deep end at the event — as none were seated next to each other.

Ivanka sat between Liam Fox, the U.K. secretary of state for international trade, and Sophie, Countess of Wessex. She was nearest to her father. Her husband Jared was at the other table.

Eric was placed between Dame Vivian Hunt and Janet Tucker, while his wife Lara was much farther down the table between Lord Hague of Richmond and Royal Dutch Shell chief executive Ben van Beurden. 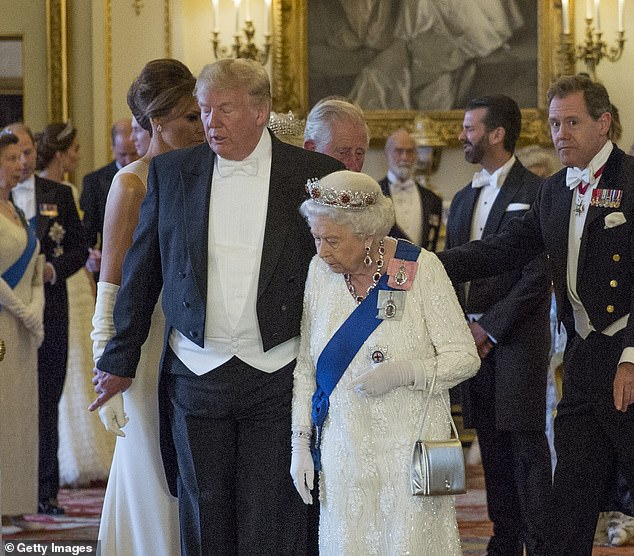 Don Jr. appeared to be patiently waiting for some instruction in the background before heading into the dinner 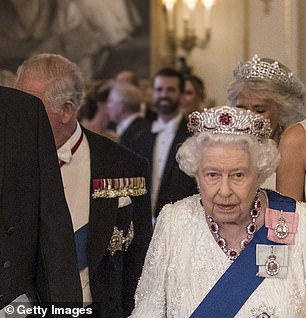 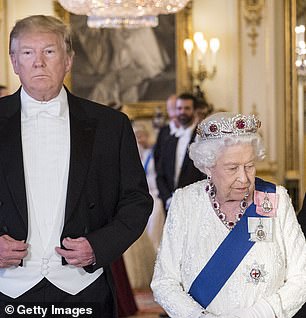 He did, however, perk up when he noticed photographers several feet away 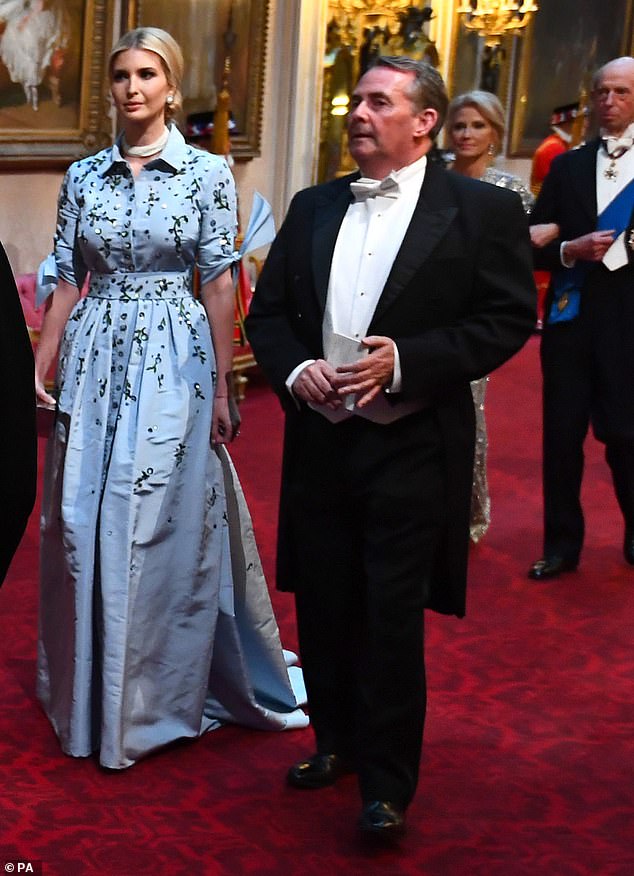 And the children’s appearance at the State Banquet at Buckingham Palace didn’t go unnoticed by social media users.

One user took to Twitter to highlight the fact that all four children attended the event, writing: ‘Is it customary for us to send the kids and an entourage to the UK?’

‘How much did this trip cost US? #TrumpUKVisit,’ wrote another.

A fourth user added: ‘Why are US tax payers paying for a Trump family vacation, all of his adult children, to meet the Queen?’

Another Twitter user said: ‘You got to be kidding, Trump brings his children to the UK. I sure hope were not paying for this bulls**t’. 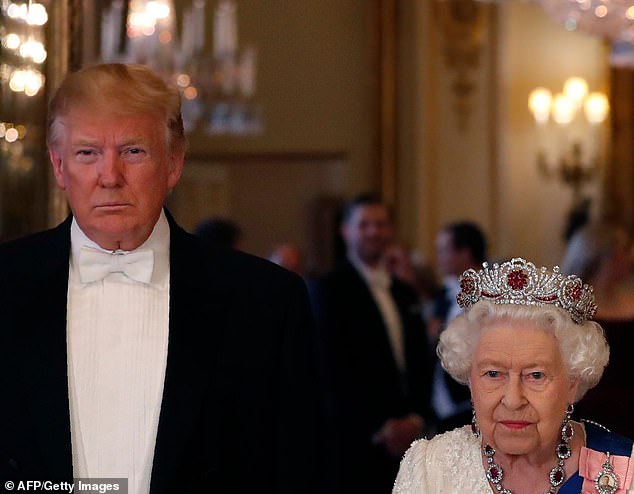 Eric loomed in the background of photos of his dad, standing alone with his hands held in front of him 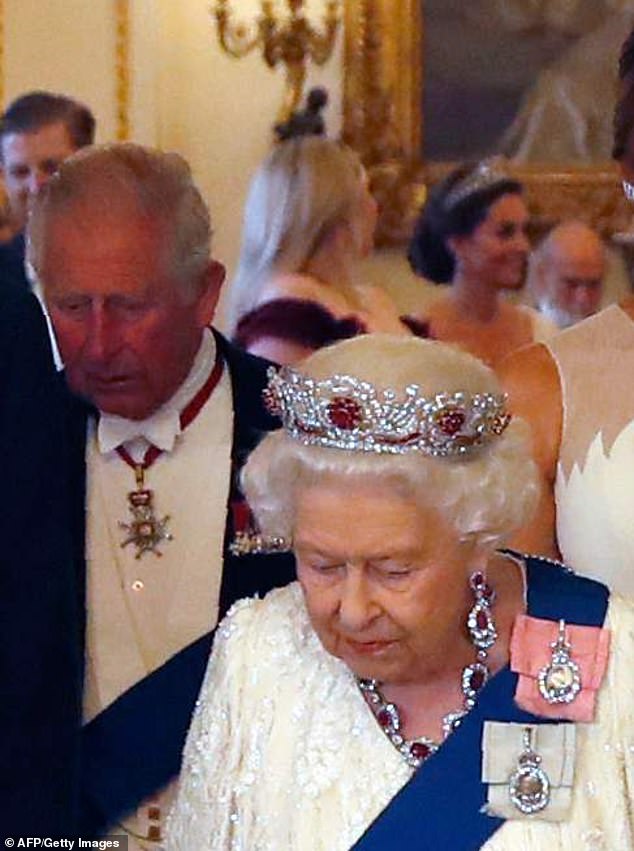 Tiffany was seen standing right next to the Duchess of Cambridge 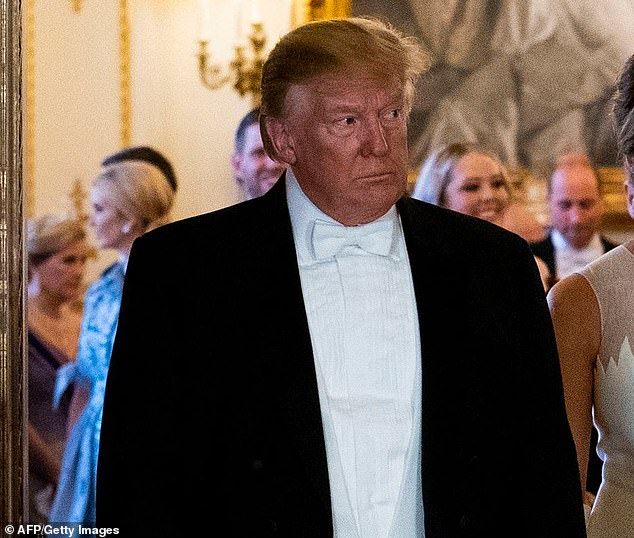 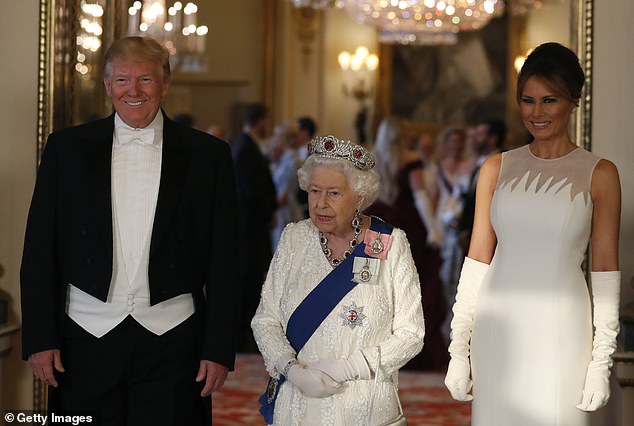 Tiffany, dressed in red with full-length white gloves, could be spotted by her brother Don while their dad posted for pictures with the Queen 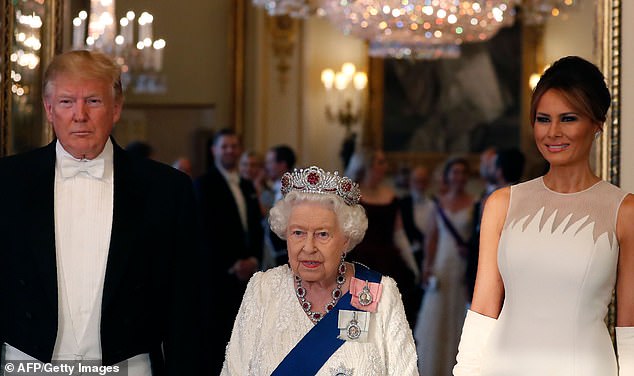 Oddly enough, photos captured each of the adults seemingly standing off on their own

While it is certainly unusual that all four of the President’s adult children would attend the banquet, the event is one of the most important ones on the Trumps’ three-day itinerary.

So it’s no wonder that Ivanka and Tiffany turned up the glamour with the dresses they chose for the evening.

Their older brother Don Jr. went all-out, too, snagging a tuxedo from a designer friend Zang Toi — whose show he attended at New York Fashion Week earlier this year.

He shared a snapshot of himself heading over to the event on Monday night, posting an Instagram selfie in what appeared to be a chartered van for the ride over to the palace. 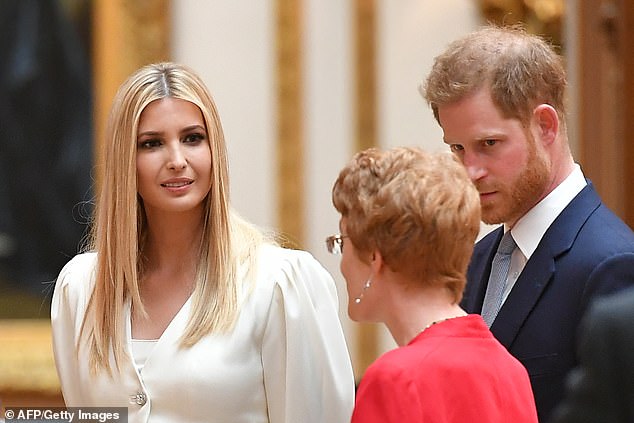 Earlier in the day, the 37-year-old viewed US items on display at the Royal Collection in Buckingham Palace with the Duke of Sussex (right) 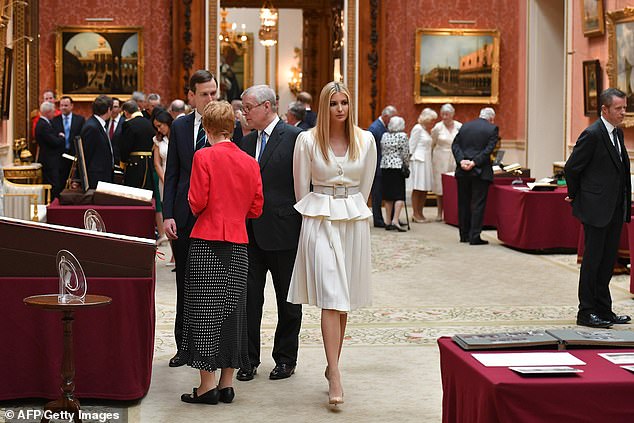 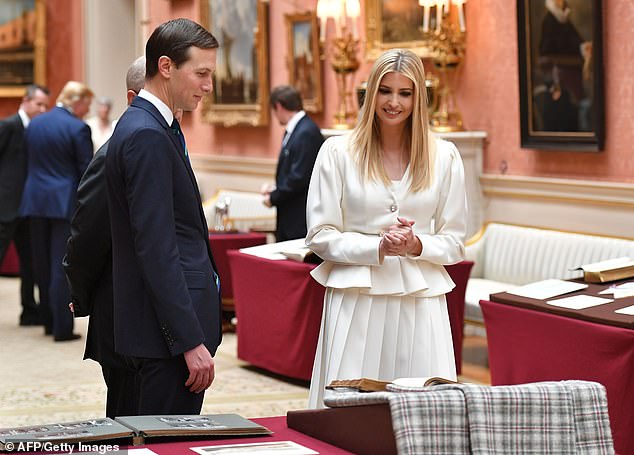 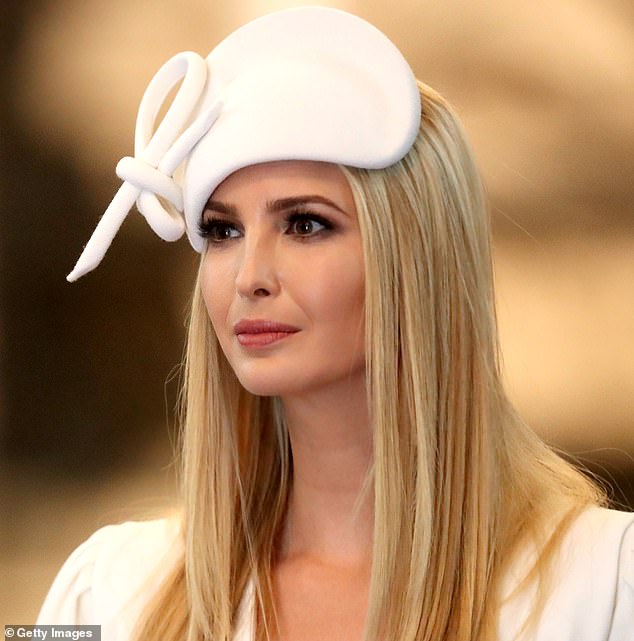 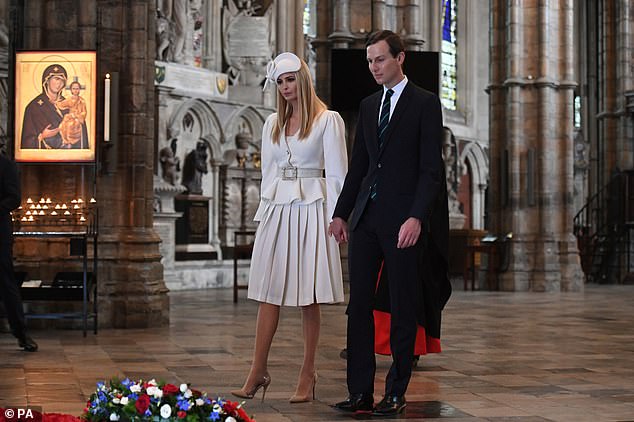 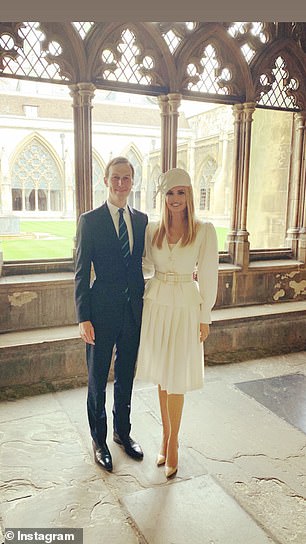 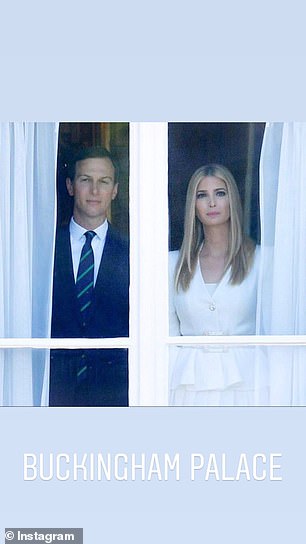 Snap-happy Ivanka has been documenting her trip on Instagram

‘Tails/white tie thanks to my buddy @zangtoi,’ he wrote. ‘Off to the state dinner!’

Meanwhile, Eric opted for a similar black suit with a white bow tie. He was accompanied by his wife Lara who wore a black and white strapless gown by designer Monique Lhuillier.

She complimented the outfit with a pair of satin white gloves, and wore her hair pulled back for the evening, finishing off the look with a simple pearl necklace.

This is the first event of the trip that Tiffany, Eric, and Don. Jr. have been invited too, though golden child and special adviser Ivanka was around for several engagements so far.

First thing this morning, she started her day with a visit to Buckingham Palace, where she admired American items in the Royal collection alongside her husband and her father.

There, she also spend a moment speaking with Prince Harry, who was there without his wife, the Duchess of Sussex.

After that, she headed over to Westminster Abbey with her husband, where they visited the Grave of the Unknown Warrior.