When Melbourne actress Lisa McCune came to Sydney earlier this year to star in Girl from the North Country, her friend artist Yvonne East asked her to sit for a portrait for this year’s Archibald Prize. 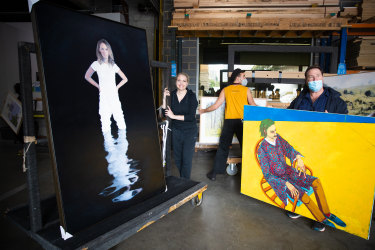 “I had this dream about her wading knee-deep in troubled waters,” says East, a 2018 Archibald finalist with her portrait of Chief Justice Susan Kiefel.

“I can’t believe I convinced a Gold Logie winner to stand for hours in a huge pond I created in a Chippendale warehouse all from a crazy dream,” says East, of Neutral Bay.

The finished painting was delivered just before the art competition’s 2022 deadline on Friday.

Along with Claus Stangl’s portrait of Academy Award-winning director Taika Waititi, this Archibald entry of the former Blue Heelers star, are the favourites of Art Gallery of NSW head packer Brett Cuthbertson for this year’s packing room prize. Followed closely by another Gold Logie winner, The Secret Life of Us star Samuel Johnson, painted by Jeremy Eden, a 2021 finalist. 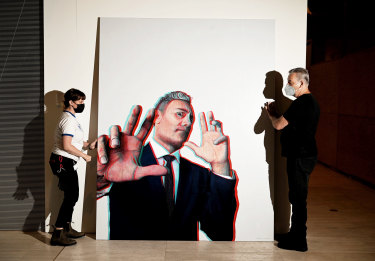 It may come down to the battle of the TV queens. As well as McCune, entertainment reporter Brooke Boney has been portrayed in pink by 2019 finalist Laura Jones.

And 7.30 political reporter Laura Tingle, has been captured on canvas by seven times finalist James Powditch, following on the ABC theme with his Kerry O’Brien portrait that was a finalist last year. 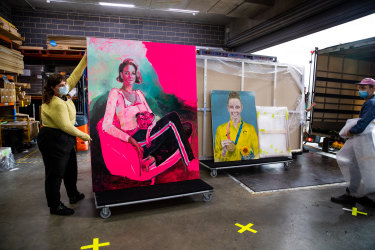 Cuthbertson’s tip for the likely overall winner for this year’s $100,000 judges’ prize, is a portrait of another woman wading in water like McCune, a giant portrait of Lismore artist Karla Dickens, painted by four-time finalist Blak Douglas.

“Women wading in water, it says so much about this year,” Cuthbertson said.

If anyone would have his finger on the pulse of voters in the lead up to an election, it would be Cuthbertson as he unpacks the 2022 entrants in Australia’s favourite portrait prize.

So what’s his diagnosis on the mood of the electorate?

“They’re not too fond of politicians,” he says noting there are no paintings of Prime Minister Scott Morrison, and no premiers except for WA’s Mark McGowan (two entries).

“There are more paintings of doctors and medical professors, even local chemists than there are politicians and leaders of the business world this year,” he says.

More TV and sports stars too – spin bowlers over spin doctors. Like Australian cricketer Ashton Agar, currently playing in Pakistan who was painted as a diptych by his brother William, created while the spin bowler was in Melbourne to play in the Big Bash in January to show the highs and lows of cricketing life.

“Will is my brother and my best friend. Because of this he has had a very intimate insight into my journey over the past 10 years, one filled with a public smile but also a private, human struggle that only a brother could notice,” the cricketer said from Pakistan. 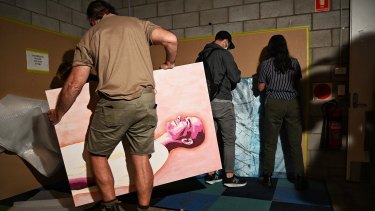 Some of the few politicians who did get an Archibald guernsey, included Sydney lord mayor Clover Moore by Sydney artist Adam Norton, Governor-General David Hurley and his wife Linda, Pauline Hanson, and Linda Burney with her daughter Willerei. 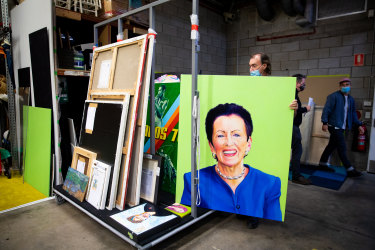 This year’s Packing Room Prize will be announced on May 5, along with the 2022 finalists.