Aliyah Royale and Alexa Mansour also explain how the show will connect to a younger audience and share their first on-set experience with walkers.

“The Walking Dead” universe gets a little bigger this weekend with the series premiere of “The Walking Dead: World Beyond,” a spinoff with a completely new — and much younger — set of central characters.

Taking place 10 years after an apocalyptic event known as “The Night the Sky Fell,” the show revolves around a group of teenagers who have little to no memory of a time before walkers — or as they’re known here, “empties” — roamed the earth. Though it’s a totally new cast, there are still ties to both “The Walking Dead” and “Fear the Walking Dead,” thanks to the presence of the Civil Republic Military — the mysterious group that took Rick away the last time we saw him.

Stars Aliyah Royale and Alexa Mansour — who play sisters Iris and Hope, respectively — were thrilled to join the ever-expanding universe and know exactly which characters from the parent series they’d love to see on their show if given the chance of a crossover. 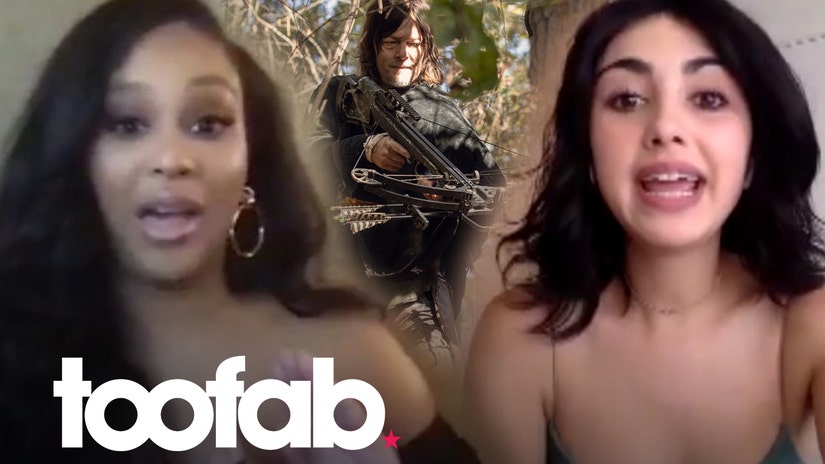 “Daryl Dixon,” Mansour replied immediately. “100%. I’ll even reload [the crossbow] for him. I don’t even need to actually grab it. I’ll just put the arrows in there and he can take care over everything.”

For Royale, she’d love to cross paths with Negan.

“I met Jeffery Dean Morgan and I lost my mind,” she continued, recalling a moment from New York Comic-Con. “I’m pretty sure he was in a leather jacket or something, and I was like, ‘Oh shit, he’s cool!’ And he was just so kind and just very talkative.”

“You wonder like, when you meet your heroes or the original stars of the show you’re coming onto, you’re like, ‘Are they cool? Are they like open to this younger idea of the cast?’ and he was so cool,” she continued. “But, yeah, if I got a chance to work with Negan and like hold Lucille … like my [World Beyond weapon] would’ve got a run for her money if I got to hold Lucille!” 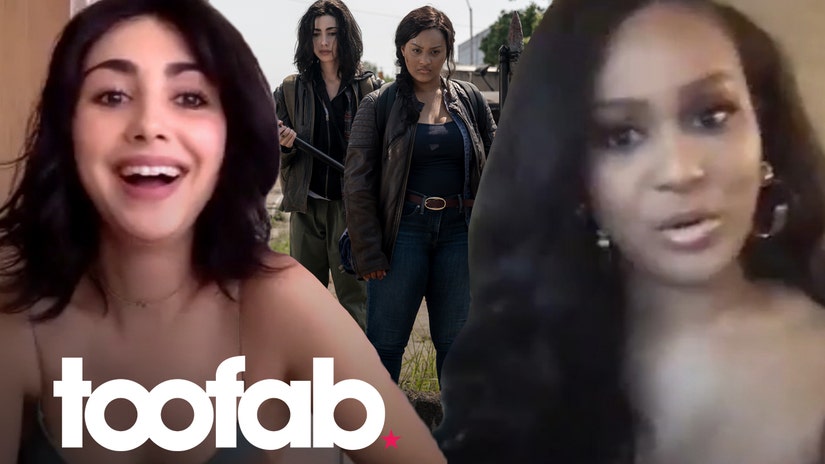 A big horror buff, Mansour was already a fan of the original series when she landed the role on the spinoff, while Royale even went so far as to avoid the “Walking Dead” house at Universal Studios Hollywood because walkers “deeply terrified” her.

Both of them, however, were scared about seeing their first “empties” on set once they reported to work.

“The first night that I was on set was when, for some fabulous reason, we decided to have like several groups of 10, 15 empties at a time doing different things and I didn’t know that they were there,” explained Royale. “I remember opening this door into catering to get some food or whatever and as I opened it they all just came out single file and I don’t even think they saw me or knew that I was existing because at that point I hid behind the door, but it was like 2 in the morning, pitch black dark and they’re in the full, full, full look.”

“I ran straight to my trailer and called my mom and she talked me off the ledge,” she added. “That’s how that happened the first night on set.”

Mansour also ran into her first zombies by craft services. “I’m like looking at them eating granola bars and stuff and I’m like this isn’t as bad as I thought it was going to be,” she recalled. “And knowing who’s under the costume sometimes helps a lot with not being too freaked out.”

The Walking Dead to End In 2022, Spinoff Coming with Norman Reedus and Melissa McBride

The first two episodes previewed by TooFab definitely have more of a YA vibe than the other two series in the “Walking Dead” universe, as the show is clearly trying to connect to younger viewers who may not see themselves represented as much on the other shows. The teens in this show, curious about the world outside the safe community in which they’ve been raised, venture outside those walls in search of something more.

“Gen Z today is very active. We’re opinionated. We have a level of fearlessness to us,” explained Royale. “The curiosity we have to learn — whether it’s about what’s going on in the big seat that rules our country or voting initiatives or social injustices — we’re curious, we want to learn and we want to help.”

“And I think there’s a level of hope that we have that things can get better than what they are right now, and that’s exactly what you’re going to see in Hope and Iris,” she continued. “All they want is to make things better and to contribute something to a world that everyone thinks is already dead or gone to shit. We don’t have that same perspective. We’re ready to prove that and show that. That if the change isn’t already happening, that we’ll be it.”

Mansour also loves how their characters “hold each other up” and “don’t judge each other,” something she believes is “really important for kids and everyone to see.”

“The Walking Dead: World Beyond” premieres Sunday, October 4 on AMC. Watch the full video above to see what the two stars said about the CRM and whether they believe they’d survive a real-life zombie apocalypse.