Nationals leader Barnaby Joyce has dismissed calls for stronger targets to cut greenhouse gas emissions in a blistering warning about the cost of action, saying a United Nations report on catastrophic climate change has not shifted his view.

Mr Joyce said he understood the goal of reducing emissions but could not sign up to a bigger target without knowing who would pay the price, saying regional Australia had suffered in the past for ambitious targets imposed by others. 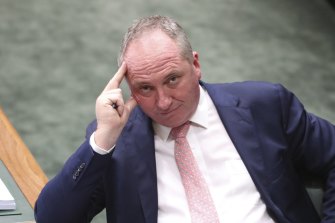 Deputy Prime Minister Barnaby Joyce says he could not sign up to a bigger emissions reduction target without knowing who would pay the price.Credit:Alex Ellinghausen

The remarks confirm the obstacle facing Prime Minister Scott Morrison in negotiating a goal of net zero carbon emissions by 2050 ahead of a UN summit in November where Australia is likely to be isolated if it does not upgrade its target.

Mr Joyce, installed as Deputy Prime Minister in a Nationals’ spill in June, said the scientific report from the Intergovernmental Panel on Climate Change did not alter the problem of telling Australians how a higher target could be met without a cost on households.

“We’ve been sucked into this one before, where we’ve agreed with the outcome and later on came the price, and the price was the divestiture of all our vegetation rights.

“If we hadn’t done that in the first instance we would probably have more trust this time.”

Asked if he was open to the 2050 target or sceptical about it or definitely against it, Mr Joyce said the question was “ridiculous” if he could not be told how the target would be achieved.

Mr Morrison declared on Tuesday he would not ask regional Australia to bear the burden of action on climate change, sending another signal he was willing to negotiate with the Nationals and others in the Coalition party room to reach net zero emissions by 2050.

Although he hailed the IPCC report for highlighting the need for action, Mr Morrison made no change on Tuesday to his stated policy that he wants to achieve net zero emissions as soon as possible and preferably by 2050.

United States President Joe Biden has set a net zero target for 2050 and United Kingdom Prime Minister Boris Johnson has a 78 per cent target for 2035, highlighting the likely pressure on Mr Morrison to set a higher target at the UN summit in Glasgow in November.

Liberals believe the 2050 target could have majority support in their party room but Nationals MPs are warning against the goal, raising the prospect of a similar split to the divide on the National Energy Guarantee in the final days of the Turnbull government three years ago.

Nationals deputy leader and Agriculture Minister David Littleproud has canvassed the idea of higher financial incentives for farmers who use their land to reduce emissions, such as through soil carbon or retaining vegetation.

While that could win over the Nationals to a stronger target, Nationals Senate leader and Regionalisation Minister Bridget McKenzie has insisted in the past that any target must be endorsed in a separate meeting of the Nationals party room.

Mr Joyce said the IPCC report did not tell Australians how a higher target could be reached and who would pay the price.

“They said what the consequences were, they said what has happened thus far but they didn’t say how they were going to achieve it.

“Therefore, you can’t put a cost on it.

“We have got to get a plan and a price that is specific enough that you can tell people exactly how this process is going to be achieved.

Labor has set a net zero target for 2050 but is divided on whether to embrace a more ambitious target for 2030 or 2035, with former resources spokesman Joel Fitzgibbon arguing it is too difficult to set such a target from opposition.

While Mr Morrison could narrow the gap with Labor by embracing net zero by 2050, the rise of Mr Joyce to the Nationals leadership has slowed his attempts to do so and raised doubts about whether the target could be endorsed before November.

Opposition Leader Anthony Albanese said the government should lift its target in light of the IPCC report.

“You have a government that is resisting adopting net zero by 2050, a commonsense position that’s adopted all over the world,” he said on Tuesday.

“This government has just been dragging the chain. And they’ve been slammed again by this report because we are not pulling our weight internationally. And with our climate and our natural assets, we have more to lose than most countries on this vast island continent of ours.”