Secret lingo that fooled Mary Whitehouse! When homosexuality was illegal, the gay community developed its own language. Although flamboyant and fun, its origins were in fear and harassment

Language is not only a means of general communication, oiling the social wheels. With codes, ciphers and passwords, it can form a secret, private dialect, the keys to its meaning made available only to those in the know.

Examples include public school slang, military acronyms and the deliberately baffling jargon in le Carre’s security services or TV’s Line Of Duty (‘Alert SOCO, there’s an OCG. You’ll need to send an ARU!’). In these worlds-within-worlds, language is the badge of an elite club, double dutch.

When it comes to sheer inventiveness, however, the vocabulary, phrases, idioms, grammatical rules, pronunciation and spelling of Polari, ‘Britain’s secret gay language’, are hard to beat. 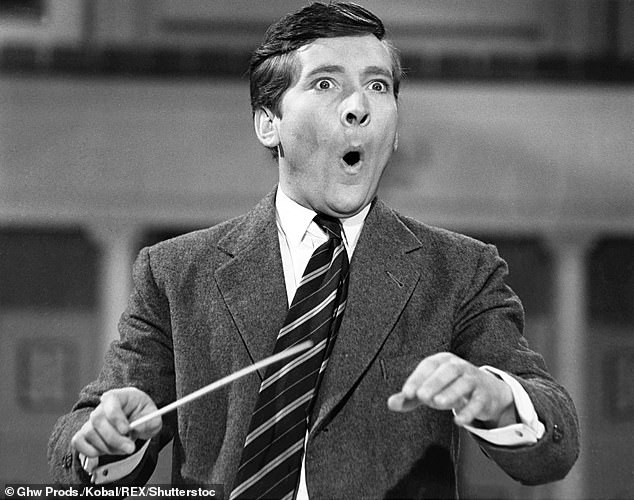 Polari, ‘Britain’s secret gay language’, was heard by millions each week, between 1964 and 1968, in the radio programme Round The Horne staring Kenneth Williams, pictured

Polari was spoken by ‘a class of people . . . on the margins of society’ — the homosexuals who reacted to the risk of arrest, shame and blackmail with ‘camp flamboyance and bravery’ and who evolved a lingo of ironic self-parody and comic exaggeration.

Polari — from the Italian parlare (to speak) — was heard by millions each week, between 1964 and 1968, in the radio programme Round The Horne, when Kenneth Williams and Hugh Paddick, as the out-of-work chorus boys Julian and Sandy, wittered about their odd jobs. ‘How bona to vada your dolly old eke!’ Williams would say to Kenneth Horne —‘How nice to see your friendly face!’

The award-winning script was by Marty Feldman and Barry Took, who loved slipping in double entendres (‘I used to stand there with it fizzing in me ’and’), in the hope of outraging Mary Whitehouse.

Despite her campaign against ‘dirt, promiscuity, infidelity and drinking’ in the media, Polari, alas, went quite over Mary’s head, even when Williams regretted: ‘Scharda there’s nada in the larder’ — which, in addition to meaning ‘there’s no food in the cupboard’, to gays meant, ‘it’s a shame he has a small willy’.

A dictionary of Polari shows the derivations from outlaw origins. 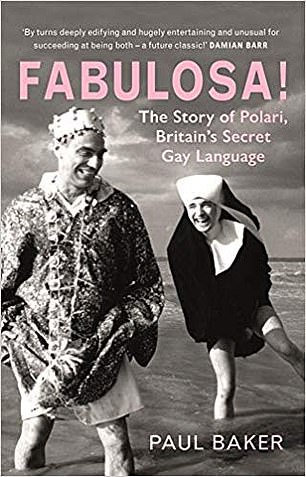 New book Fabulosa! reveals history of the language and its origins in harassment

Author Paul Baker, a professor of English, who is not above terminology such as ‘performativity theory’ and ‘sociolinguistic coding orientation’, traces the lexicon back to 18th-century thieves and vagabonds’ slang — cove, cull, cully — to do with picking locks and evading magistrates.

Owing to the number of Italian pedlars in 19th-century cities, Polari had ‘munjury’ (mangiare) for food, ‘letty’ (letto) for bed, and two pounds, three shillings and ten pence halfpenny came out as ‘dewey funt, tray bionk daiture soldi medsa’, which, to this day, would be understood on the streets of Naples.

Baker informs us of the influence of the Romany tongue, used by the gypsies of Eastern Europe.

Del Boy’s ‘cushty’ comes from kushtipen, ‘chavi’ is girl and ‘boona’ is good, hence bona. The most modern words were Americanisms, imported when the GIs arrived during World War II: butch, fruit and naff. ‘Naff off!’ was yelled at Press photographers by Princess Anne, when she fell off her horse at Badminton.

Polari wasn’t simply the language and the words, however. It was ‘the attitude that went with them’ — the courage of the ‘omee-palones’ (men-women), the queens, queers, pooves and poofs, as they were offensively called, who were persecuted for hundreds of years by the police, known as Betty Bracelets or Hilda Handcuffs. 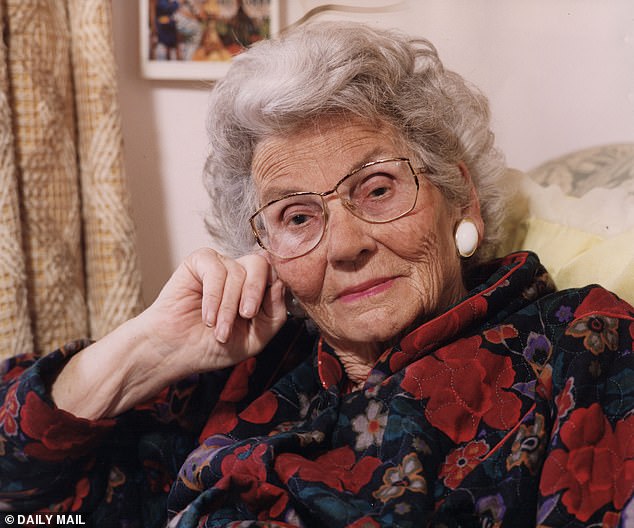 It is still only slowly fading, of course, but homosexuality carried a terrible stigma and was made a capital crime by Henry VIII in 1533.

The Offences Against The Person Act (1828) and the Criminal Law Amendment Act (1885) extended the reach of the law into private lives, as ‘gross indecency’ covered a multitude of sins, from cuddling onwards.

Oscar Wilde’s trial at the end of Victoria’s reign was a classic example of the mass hysteria and tyrannous hypocrisy that erupted, and the best sections of Fabulosa! deal with the social and cultural attitudes behind and within the Polari dialect — language as sanctuary.

It sounds crazy now, but, just as girls caught with condoms were charged with prostitution, any man owning a pot of Vaseline faced jail. 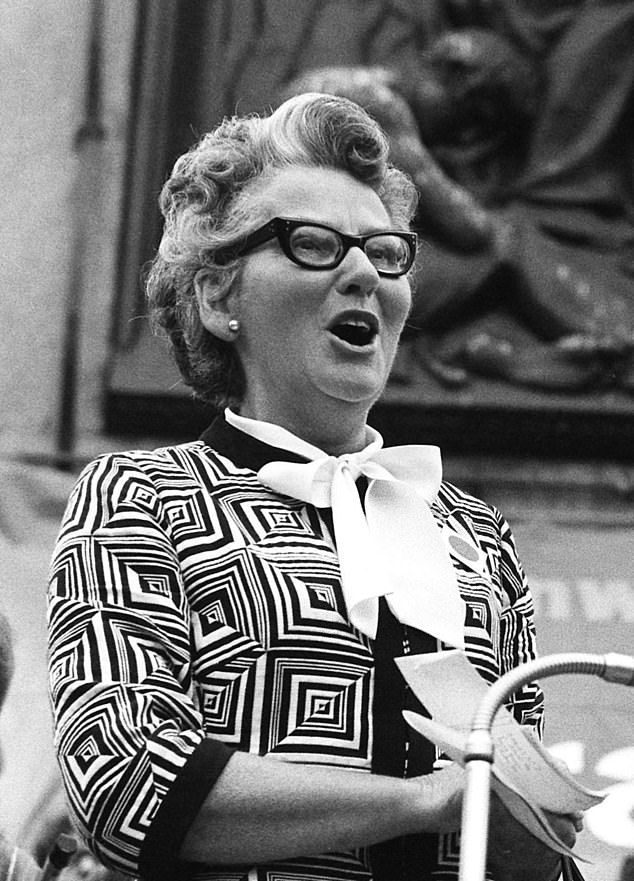 Mary Whitehouse, pictured in 1971, campaigned for public decency and to Clean Up Television

There were newspaper articles as late as 1963 warning right-thinking citizens against men who were over-groomed, ‘fussy dressers’ and fond of ‘wearing fluffy sweaters’.

I remember in Wales being told never to speak to a man in suede shoes.

To be middle-aged and unmarried meant you were under suspicion, the object of sneering gossip — sad chaps lived with their mum or entered into hopeless, unfulfilling courtships. There was always the Catholic church, of course, or school-mastering, the theatre and the merchant Navy. Running a hotel in Brighton was popular.

Baker has researched Polari in many of these venues. ‘It was in this climate of state oppression,’ he says, ‘that Polari came into its own.’

Yet the oppression amounted to systematic torture. Prisoners would be given aversion therapy or chemical castration — Alan Turing grew breasts as a consequence of the treatment, which contained oestrogen, after he was prosecuted for gross indecency and given the choice of prison or the treatment — and killed himself with cyanide (he was posthumously pardoned in 2013). 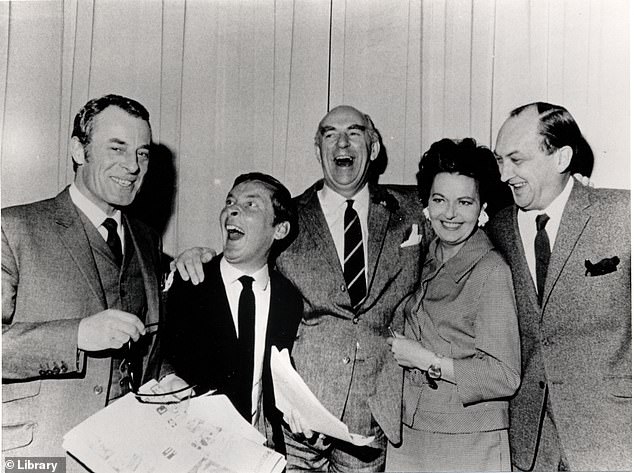 Polari began fizzling out with legalisation in 1967 — but Hilda Handcuffs, instead of catching real criminals, still enjoyed rounding up homosexuals, raiding pubs and clubs popular with actors, arresting people for ‘licentious dancing’.

Between 1976 and 1991, James Anderton, the monstrous chief constable of Greater Manchester, thought he was on a mission from God to clean up the streets.

Polari was seen as ‘uncool and old-fashioned’ by the more contemporary, militant gays, who didn’t want to be associated with ‘limp-wristed’ Kenneth Williams, Charles Hawtrey, John Inman or Larry Grayson — personalities who, paradoxically, were favourites with everyone’s grannies.

According to the University of Cambridge, Polari today is officially endangered. On the other hand, the Bible has been translated into the idiom, where God is called Gloria. Hi-de-Hi! actress Su Pollard, who delights in Polari, also likes to keep the tongue alive.

Though a language smacking of Carry On films and saucy seaside postcards, it’s the tragic torment and harassment that gave rise to Polari in the first place that must not be forgotten and which is why this book is important.