Rural leaders are putting the Nationals on notice in the lead up to international climate talks that farmers are still furious over the Kyoto climate accord, warning the bush won’t pay the bill for climate action again.

Former Prime Minister John Howard won out against international opposition during Kyoto negotiations and inserted the infamous Australia clause into the terms of the 1998 agreement. It allowed emissions created by cutting down trees, which reduces the amount of carbon stored in forests, to count towards Australia’s target. 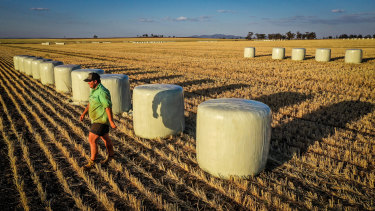 Farmers are warning the federal government they will not bear the burden of future climate policy. Credit:David Gray/Getty Images

The Australia clause paved the way for new laws restricting land clearing, which delivered emissions reduction that enabled other polluting industries to carry on with business as usual.

NSW Farmers Federation president James Jackson said the new restrictions were “morally reprehensible” and would not be tolerated again.

“The bush has done enough, we’ve carried the bill for the country’s social conscience.”

US President Joe Biden is convening an international climate summit next week, on April 22, raising expectations Australia may announce a new emissions reduction commitment in response to international pressure.

“(Kyoto-era laws) satisfied the emissions targets by stealing property rights of farmers,” said Mr Jackson, a Guyra livestock producer. “Another land grab which outsources the pain to agriculture is not acceptable – we aren’t going to be the fall guy for the carbon gods again.”

Mr Howard used federal funding to entice state governments to change their laws to restrict land clearing. Farmers who bought properties with the expectation of clearing land to expand livestock or beef operations were fuming, while others argued their long term expansion plans were denied.

The Kyoto protocol required Australia to limit its emissions to an eight per cent rise over the 22 years from a baseline of 1990 to 2012. The scale of reduction delivered by avoided land clearing meant Australia’s emissions from burning fossil fuels could increase by 25 per cent over the 22 years to 2012, while the country’s overall emissions remained under 8pc.

Federal Agriculture Minister David Littleproud told this masthead farmers had been ripped off.

“The bush has done enough, we’ve carried the bill for the country’s social conscience. Howard paid the states, but states didn’t pass it on to farmers. That’s not right in Australia,” Mr Littleproud said.

Prime Minister Scott Morrison flagged for the first time his ambition to reach net-zero emissions by 2050, but he responded to the Nationals fears of a rural backlash with the caveat that climate policies would “particularly not ask regional Australians to carry that burden”.

Nationals Leader Michael McCormack and Mr Littleproud are aware of the anger in the bush, and say that any new climate commitments are “not going to hurt regional Australia”.

Rural groups are not advocating to protect high-emitting industries like coal. The farm sector endorses climate action and is investing in research and development to reach ambitious climate goals. The National Farmers’ Federation has set a target for net-zero emissions by 2050. The red meat sector set a goal in 2017 to reach net-zero by 2030 and GrainGrowers has committed to develop a 2030 goal and the pork industry aims to go beyond carbon neutrality as soon as 2025.

National Farmers Federation chief executive Tony Mahar said “people will be looking out for a repeat of Kyoto this time”.

“Farmers wanted to utilise their land, but that potential hasn’t been able to be realised,” Mr Mahar said.

State land clearing restrictions bit the hardest in north-west NSW and Queensland, which unlike other states retained relatively large areas of undeveloped land with agricultural potential. Land clearing is a contentious issue and is ranked alongside feral cats and foxes as a leading cause of native wildlife extinction.

Mr Littleproud is developing a biodiversity stewardship payment system for private landholders, which would create a market where farmers get paid for rehabilitating chosen areas of their property, receiving payment for carbon sequestration and biodiversity receiving certification for their produce – which could potentially be marketed to consumers at a higher value.

President of the Nationals branch in Moree in NSW, Brendan Moylan, said the policies that Kyoto spurred “froze agricultural development at a 1990 level”.

“Instead of developing a policy that all of the population contributed to equally, governments went for the easy option and targeted a minority,” Mr Moylan said.