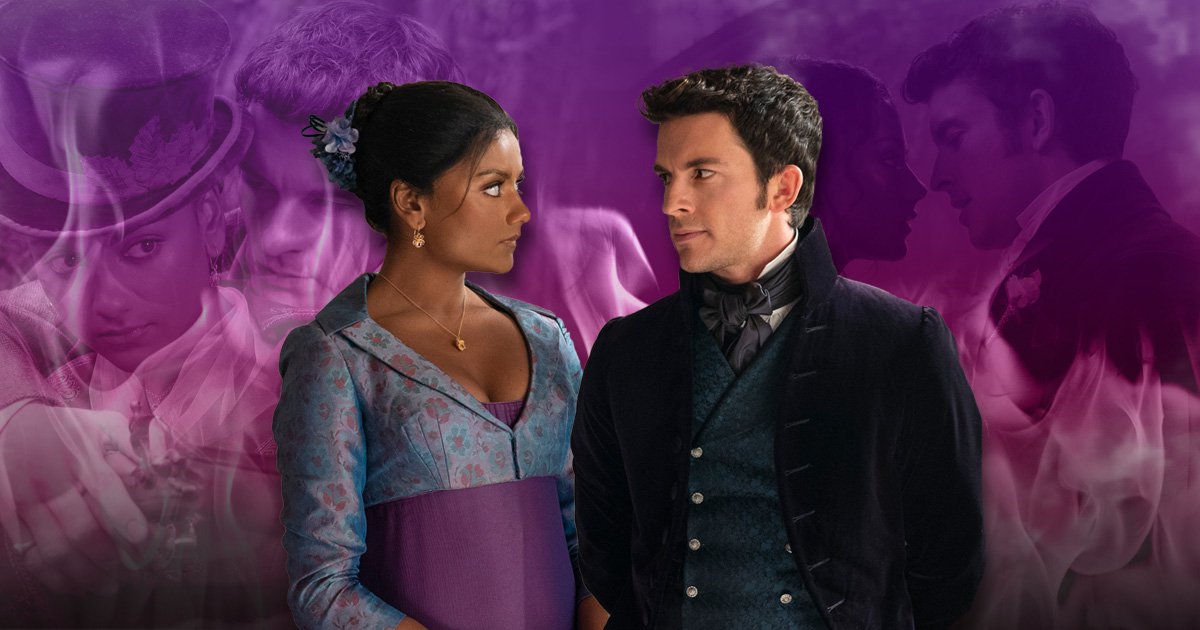 Feeling a little hot under the collar?

Since Bridgerton season 2 dropped on Netflix, the nation cannot stop thinking about Anthony and Kate (if you haven’t watched it yet, there are spoilers ahead).

Our TikTok algorithms have been working overtime, feeding us continuous clips of the two characters exchanging intense glances and steamy exchanges.

But unlike the first series of the show – which was filled with full-on sex scenes at every turn – this season is proof there’s power in a lack of explicit action. Rather, it’s the undeniable chemistry and building sexual tension that speaks volumes this time round.

The season is peppered with teasing moments: there’s the chest caress after the bee sting, the glance of Kate’s stocking during the hunt, the intense exchanges at the wedding (and the bangle drop), and Anthony taking in Kate’s scent as she walks past – to name but a few.

This tension slowly builds until we reach the climatic final two episodes – where fans finally get their pay-off.

Of course, it’s a formula we’ve seen before (we’re looking at you Fleabag’s Hot Priest).

The idea that two characters obviously want to be intimate but something, or someone, is standing in the way of it happening – so it’s held off, and when it eventually happens it’s incredibly satisfying.

So, why do we find this delayed gratification so hot? Experts have shed light on why we all can’t stop thinking about it.

Aaron Surtees, a psychologist and hypnotherapist at City Hypnosis, says that biology undoubtedly plays a role.

He explains: ‘It all comes down to our brains. Sexual tension and a build-up of sexual attraction causes a rush in certain feel-good chemicals including oxytocin, dopamine and norepinephrine which run through our bodies when activated.

‘This is why delayed gratification in romance between two people is so appealing.

‘The changes you feel in your mind and body will be euphoric and the sexual chemistry will create feelings of excitement and happiness.

‘Instant gratification is not as long-lasting because the sexual tension of being intimate or physical with your romantic partner for the first time is shorter lived, therefore a couple who prolong this feeling will live on a “love high” for longer.’

As well as simple biology, a lot of it comes down to the emotion that comes with this build-up.

Therapist and author Marisa Peer explains: ‘With delayed gratification you have the chance to really get to know the other person.

‘This helps to establish an understanding of what they like making the first time less daunting. Feeling comfortable in someone’s company reinforces the bond of intimacy.’

Sexologist and relationship coach Ness Cooper adds that prolonged intimate interactions before sex usually helps a couple get to know each other a little more – making two people feel more connected, as a result.

She says: ‘Delaying sexual gratification by waiting for sex can be rewarding for some couples as it can help them both become comfortable with each other, which can mean they feel safer when exploring their vulnerabilities during intimate and romantic interactions.’

The build-up replicates sex itself

‘Even though we don’t see Anthony and Kate rip each other’s clothes off until much later in season two, the intense “I want you now” stares, intimate hand touches and displays of chivalry are what makes this delayed gratification plot so satisfying when it does eventually reach a climax – much like an intense, sensual sexual experience itself,’ explains sex and relationship expert Ruby Payne from UberKinky.

Ruby says this gradual build-up to an intimate moment of passion erupting is considerably more satisfying.

She adds: ‘When it comes to sex; patience, teasing, and delaying pleasure can be the ultimate turn-on for many couples because the final release is just heightened to a level like no other.’

People love to be teased

‘Forget about jumping right into the action, women often require a build-up process – the magic is in the tease, to get us in the mood,’ explains Clarissa Bloom, a dating and relationship expert for The Stag Company.

This rising tension throughout the season keeps us yearning for more – every time we come close, we are held off again.

Clarissa says this is what lots of people want in their own sex lives and relationships.

‘Reflecting many people’s love lives, many women wish their partners would bring more romance into the relationship, would build-up towards sex rather than jumping straight in, teasing you throughout the day rather than the moment they walk through the door,’ she adds.

She explains: ‘Delayed gratification is hot because it shows the person has self-restraint and self-control, which are both desirable qualities in a partner.

‘All of which are admirable qualities for a partner to possess.’