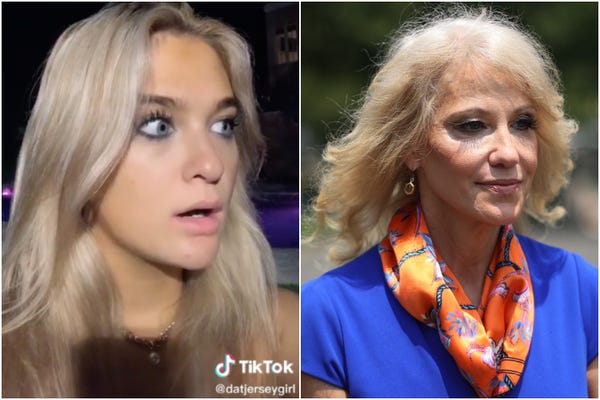 It's no surprise that Claudia Conway broke away from her parents' politics when you consider the family dynamics, according to Laura Stoker, professor of political science at the University of California, Berkeley.

Claudia, the 15-year-old daughter of former White House senior counselor Kellyanne Conway and Lincoln Project cofounder George Conway, has taken to TikTok in recent months to blast President Donald Trump and give an inside look at her family's personal and political goings-on.

The level of parental involvement in politics, whether both parents support the same party or candidate, and the general attitude among young people all affect how likely a young adult is to share their parents' political views, studies have found.

"The Conways, they are the perfect example of where you expect a break," Stoker told Insider. "There's a high level of political engagement on both parts, the children are picking that up, the parents are divided, and the zeitgeist of the day is decidedly anti-Trump in the age group of young people."

Those who oppose the Trump administration might take some pleasure in seeing Kellyanne Conway taken down in such a personal way, said Leonie Huddy, professor and chair of the department of political science at Stony Brook University.

But another aspect that makes the Conway family drama so compelling is that many people have been through something similar, although maybe not so publicly, Huddy told Insider. Forming an identity independent of your parents is part of growing up, and sometimes that means redefining your political views.

Insider spoke with experts in political socialization about why some young adults stray from their parents' political views, while others stay.

Parents can instill political engagement in their children, but those kids are more likely to forge their own political path

Families who talk about politics together tend to share similar views, at least while they're living under the same roof, political scientist Elias Dinas told Insider. The first seeds of political influence usually follow partisan lines, he said: who are the good guys and the bad guys.

"That's why you can have 13 or 12 year olds being able to tell you what party they are or what party they would vote without really knowing much more," said Dinas, who currently holds the Swiss Chair in Federalism, Democracy and International Governance at the European University Institute.

In a study titled "Why Does the Apple Fall Far from the Tree?" Dinas outlined the trajectory of how these views might diverge. Along with a partisan label, politically engaged parents are likely to pass down an appetite for politics to their offspring.

Those politically-minded offspring are more inclined to engage in discourse outside of the home, opening them up to influence within their social contexts.

People are typically exposed to new influences in their late teens and early 20s, when many move out of the parental home for college or work. Huddy said this period is known as the "impressionable years," and it's a time when the views we form tend to stick.

"You're mixing in social circles where certain views are acceptable and others aren't, and you are influenced to adopt those views," Huddy said. "It's very important to us to get along with the people we're hanging out with."

But nowadays, young people don't have to leave their bedrooms to find new sources of influence, Dinas said. The political socialization that has historically played out on college campuses now occurs on social media, and people can challenge or amplify their parents' views depending on who they follow.

Huddy noted that 18 to 29 year olds today are more liberal and more politically engaged than older generations, which has to do with the wider political climate beyond individual social circles.

It's not the first time the tenor of the times has shifted a generation towards the left, she said. Those who grew up during the New Deal stayed quite loyal to the Democratic Party throughout their lives compared to the older New Deal generation.

Politically divided marriages are rare, but can leave more up to the child

Stoker noted that in the case of the Conways, the parents' opposite stances on Donald Trump may have created uncertainty in the home.

"You find the child much more likely to break, to be similar to neither or to sort of move apart, if the parents are not united. And that is fairly rare," Stoker said.

Today, just over 20% of marriages are politically mixed, and most of those involve an independent or third-party voter. Only 4% of marriages include a Democrat and a Republican, according to data from the American Family Survey.

Parents who shift their political views later in life, like George Conway, also leave their kids more pliable to influence, Stoker said. Aside from coming from a trusted source, political messaging has to be consistent to make an impression, so a shift leaves room for questions and reconsideration.