Five years ago, Karen Sutton was hanging the washing out when someone buzzed the gates to her home. It was 11.30am and her husband Simon had gone for a bike ride with his friend Mark.

Assuming they’d forgotten their keys, Karen went to answer and was surprised to find Mark on his own. The despair on his face as he walked towards her, hands over his mouth, was such that she instinctively knew something terrible had happened.

Simon had ridden onto a grassy verge and asked Mark to give him a minute. As Mark glanced back, he had seen his friend fall from his bike and collapse. A GP, who happened to be driving past, helped give Simon CPR as an ambulance was called. 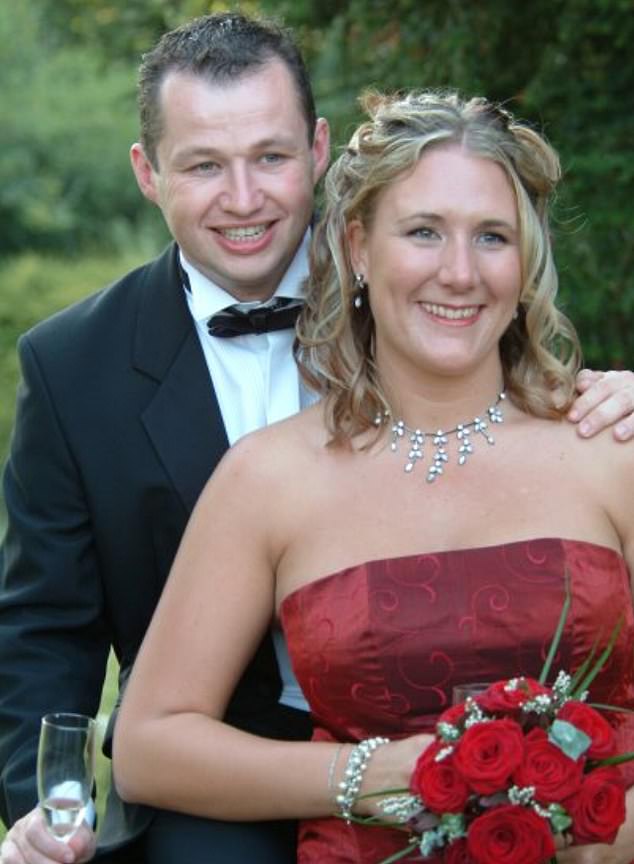 Karen Sutton, 44, who was in despair after her late husband Simon (pictured) died from a heart attack has become Britain’s first ‘Widow Coach’

An hour later Simon, who’d had a heart attack, was pronounced dead at the scene. He was only 43.

‘At first I didn’t want to tell our two young daughters, to protect them,’ says Karen, 44. ‘But the police officers — who were crying themselves — said it was best to be honest. I sat them down and said, “While Daddy was out, his heart stopped working and he’s died”. Sydney burst into tears and Ella went to get her teddy.

‘I felt heartbroken and powerless. This was a defining moment for them — they’d never be the same again.’

As months passed, Karen realised nor would she. ‘I felt I was in pieces. I didn’t consider suicide but could relate to people who felt they couldn’t carry on. I felt like I was drowning. I wanted the pain to go away.’

These days, however, Karen’s grief no longer debilitates her. She no longer feels the gaping chasm of her loss, or wants to hide from the world. In fact, she now has a sense of gratitude for the lessons Simon’s death taught her — an unimaginable sentiment, perhaps, for the recently bereaved.

‘Of course I’m not glad Simon died,’ she explains. ‘I miss our wonderful conversations, but Simon’s death has taught me so much. I am more fulfilled and content than I’ve ever been. Learning to be myself again has been liberating and empowering.’

It’s for this reason that Karen, who quit her job as a midwife after Simon’s death to raise their daughters, Sydney, now 14, and Ella, ten, has retrained as Britain’s first Widow Coach. Although there are other experts who coach the bereaved, she is the first in the UK to cater specifically to spouses. 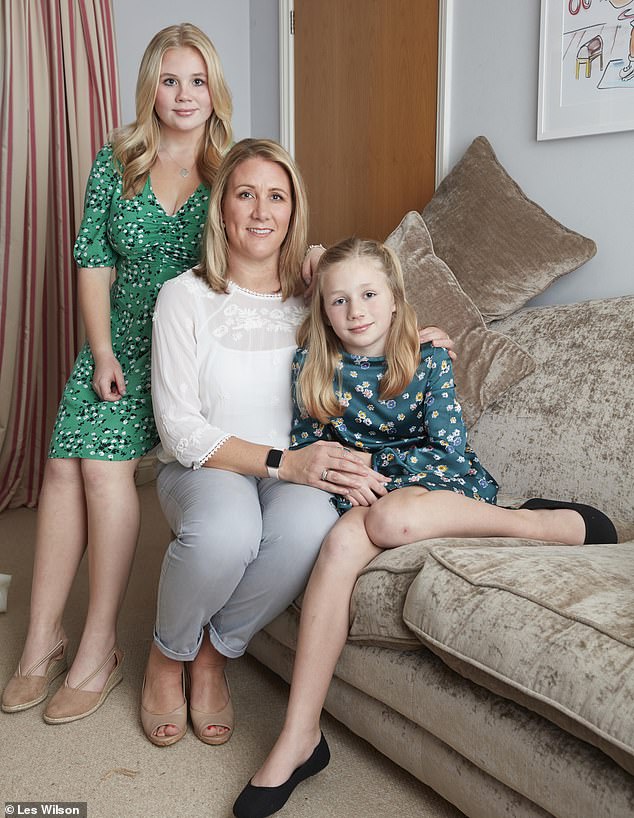 Karen said ‘because we don’t talk about death, we’re not prepared when it happens. The flurry of emotions that hit you are scary’. Pictured: Karen with Sydney and Ella

Drawing on both her professional training and her own experience, she helps women learn to love life again.

‘I wanted to let others know you can regain control,’ she says. ‘Being bereaved hurts but you can find joy again. Guilt is always attached but you can work through it.’

Losing a spouse in middle age, when many women are juggling children, jobs and caring for elderly parents, brings specific challenges. ‘For some, those responsibilities keep them going,’ she says. ‘For others, they tip them over the edge.’

For all we share about our lives online, death remains a taboo subject. According to Karen, a pragmatic, humorous woman whose clients sing her praises, we live in a grief-illiterate society: ‘Because we don’t talk about death, we’re not prepared when it happens. The flurry of emotions that hit you are scary.’

And women, she adds, grieve differently to men. ‘Men are far more restorative, more forward-thinking and will usually meet someone new a bit quicker. Women are more reflective. They feel guilty — about the last thing they said to their partner, that they didn’t love them enough, that they want to start dating again.’

Today, Karen is ‘at peace’ with her grief. She has been in a relationship for two years but her late husband’s ashes remain in her wardrobe. ‘I like to talk to him,’ says Karen. ‘I want to see what our girls will want to do with them when they’re older.’

She and Simon had been friends for five years before becoming a couple in 2003. ‘He was forthright, confident and funny,’ recalls Karen.

They married in 2010, three years after Sydney was born, and Ella followed in 2011. Simon, the managing director of a vet company, was a ‘hands-on’ dad who took charge of nappy changing and bedtime, later taking the girls camping. ‘He adored the children,’ says Karen.

Simon liked to use sport to de-stress, completing three marathons in his 30s and cycling in his 40s. 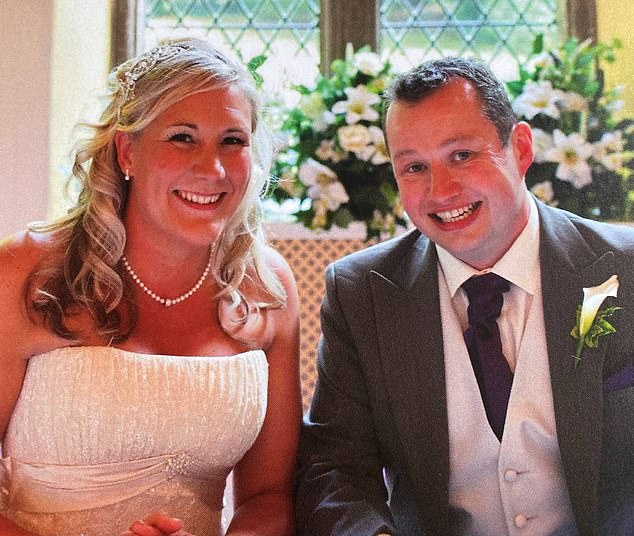 Karen said Simon (pictured) liked to use sport to de-stress, completing three marathons in his 30s and cycling in his 40s – but developed high blood pressure

At 40, he developed high blood pressure. ‘His doctor had told him to monitor his blood pressure but, a typical man, he didn’t. When he got cross I would say, “You need to calm down, you’ll have a heart attack”, but I never thought he would.’

In September 2016, Mark and his wife came to stay with them. ‘Mark suggested they go for a ride in the morning. The night before they had a few beers and Simon fell asleep on the sofa — we thought we’d got the better of him.

‘But he came upstairs, got dressed, went back down to make the kids a hot chocolate, told them to be good and said he’d see us in a few hours. That was the last thing he said.’

That evening, after receiving the terrible news, Karen shared her bed with the girls. She recalls: ‘I remember not wanting to go to sleep, because a new day would mean I couldn’t say I’d seen my husband that morning. It would create a distance from him.’

It wasn’t until the following morning, when Mark took her to the spot where Simon had died, that the enormity of his death hit her.

‘I lay on the ground howling,’ she says. ‘I wanted to leave my wedding ring there, to feel closer to him. Of course, I’m now glad I didn’t.’

Karen saw Simon’s body at the funeral director’s. ‘His hands were grey, and when I kissed his forehead it was cold, but otherwise he looked like he was asleep,’ she recalls. ‘I held his hand. Sobbing, I said, “I love you. I’ll be strong for the children and for you.” I sat with him several times that week. It helped.’ 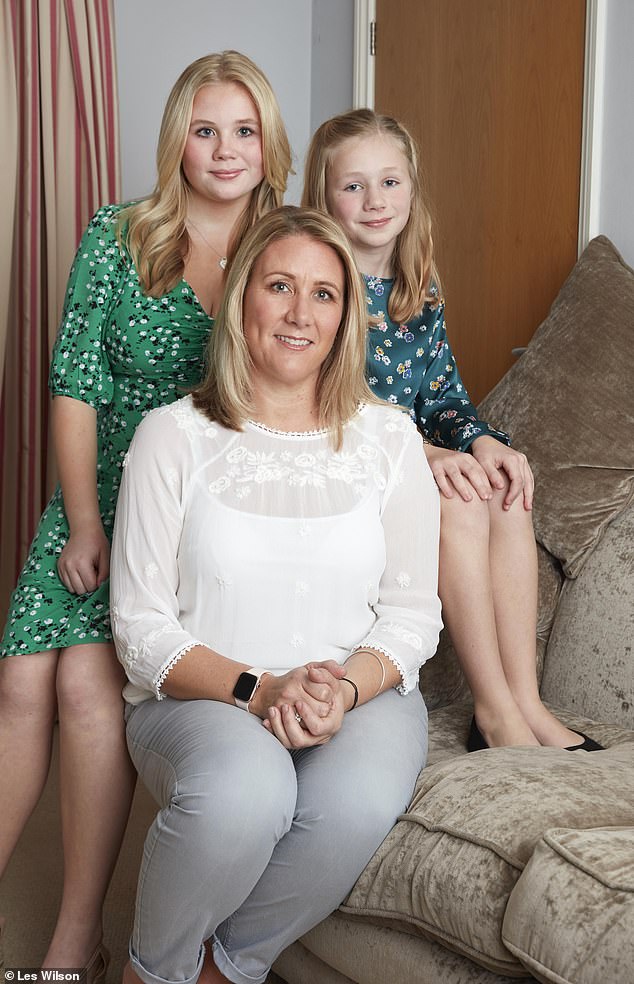 Karen said Simon’s death gave her appreciation for the simple things, as she now enjoys runs and meaningful conversations. Pictured: Karen with her daughters

Although her daughters didn’t want to see their dad’s body, they visited his casket before his funeral. ‘We wrote letters for him and took his slippers. They tied ribbons to the handles and laid their pyjamas on top,’ she says. ‘Children can be in despair one minute and playing the next. It’s called “puddle jumping” among grief experts.’

After the funeral at Cheltenham Crematorium, Karen started to flounder. ‘I thought, “Now what?” Grief is exhausting. Just functioning takes everything out of you.’ Unable to eat, she lost 1st 7lb in six weeks. She ended up in hospital twice after panic attacks. ‘I had chest pain that spread to my arm and jaw. I was convinced they were heart attacks.

‘I became obsessed with the thought that I’d die and leave the girls without a parent.’

During her training she would learn of the importance of eating nutritious food while grieving — even if you don’t feel like it.

How to find joy in life after loss

‘If our community hadn’t brought us meals we’d have lived off toast,’ she says. ‘It’s about finding things to eat that feel palatable and can be made in batches.’

It was in May 2017 that Karen hit her lowest point. ‘I’d been down for weeks and felt I was sinking deeper. I didn’t want to say or do anything.’ She was prescribed sleeping tablets and anti-depressants. ‘They shouldn’t be seen as a quick fix, but they helped,’ she says.

That summer, she tried online dating. She went on a handful of dates but some men were uncomfortable when she told them her story.

‘They felt they couldn’t compete with a dead person. One man was also widowed, but it was too hard with us both managing grief. It was too soon to start a serious relationship but dating helped give me a sense of normality.’

In early 2019 she sought professional support. ‘I hadn’t gone back to work, I felt unfulfilled, I’d put weight on and felt unhealthy. My daughters needed normality.’

Employing a life coach proved a revelation. Eating well and exercising gave Karen mental clarity, while she learnt to stop judging herself so harshly.

She discovered she was no longer the woman she was when married to Simon. ‘Back then my idea of fun was to drink and dance. Now it’s to go for a run, to have meaningful conversations. Simon’s death gave me an appreciation for the simple things.’

Karen met her current partner, Andy, 54, a recently separated engineer, through a charity auction in 2019. ‘He is respectful about Simon’s memory and encourages us to talk about him,’ she says. She and her daughters talk about Simon daily: ‘Their grief will show up throughout their lives, but I have instilled Simon’s love of life in them, and they’re happy.’

In November 2019, Karen started training as a widow coach. With no precedent, she combined a course on how to coach those dealing with break-ups with David Kessler’s grief educator programme — a three-month online course — and a year-long course with the Institute for Integrative Nutrition in America, covering everything from physical health to finances.

Most of her clients are in their 40s and 50s. Some came to her two months after their loss, one after eight years, but the average is a year. ‘Some lost husbands suddenly, others after long illnesses,’ she says. ‘Each has different traumas.

‘I’m not qualified to deal with mental health, but I can walk with them and provide a safe space to share, with no judgment.

‘It’s an honour to watch their transformation as they take steps towards a brighter future. I’m proof that this is possible.’

For confidential support, call the Samaritans on 116 123.