Celebrities, musicians, politicians and the public are paying tribute to Olivia Newton-John, who died at 73 on Tuesday morning.

The Australian film and musical giant is being remembered as a “great Australian woman” who made significant contributions to music, culture and cancer research. 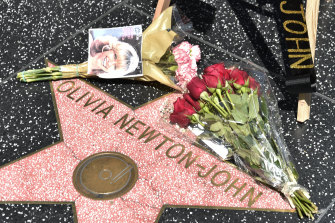 Grease co-star John Travolta was among the first to react to the news, sharing a touching post on his Instagram account early this morning. The Saturday Night Fever star described the impact of Newton-John’s legacy as “incredible”.

“My dearest Olivia, you made all of our lives so much better. Your impact was incredible,” he wrote.

“I love you so much. We will see you down the road and we will all be together again. Yours from the first moment I saw you and forever! Your Danny, your John!”

Newton-John’s performance as Sandy Olsson alongside Travolta in the film adaptation of the Broadway smash in 1978 remained central to her fame for the rest of her life.

Robert Greenwald, the director of Newton John’s other big film hit Xanadu, has remembered her “sense of hope, possibilities and positivity”.

He spoke to ABC NewsRadio of Newton-John’s mesmerising voice.

“Whatever the words, whatever the melody, whatever the tune, there is that sense of hope and joy and love that really blasts through,” he said. “And that’s very much who she was.”

Kylie Minogue said she “was, and always will be, an inspiration to me in so many, many ways.”

“Since I was ten years old, I have loved and looked up to Olivia Newton-John,” she tweeted. “And, I always will.”

Daughter Chloe Lattanzi shared a series of photographs of herself and her mother in a captionless tribute post on Instagram, while niece and singer Tottie Goldsmith said her “heart is broken, like so many of us.”

“Today marks the passing of our family matriarch and one of the world’s truly divine and magical human beings,” she said in a statement.

“She is irreplaceable. Olivia was also a beacon of light and hope for those living with cancer, and her 30-year battle with it has been instrumental in helping others find the courage and belief to keep up their own, personal fights.

“To those many, many people I send my strength and love.”

Speaking on ABC Radio National, Marles said it was “hard to imagine that she’s no longer with us”.

“For people of my generation who grew up with Grease … it’s one of these moments when you feel like an era has come to an end, and the world is a little emptier.”

Musician Delta Goodrem, who played Newton-John in a 2018 TV biopic for the Seven Network, described her friend and mentor as a force of nature.

Goodrem, who went through a battle with cancer when she was diagnosed with Hodgkin’s Lymphoma at just 18, said Newton-John was a source of guidance and inspiration.

“The whole world will feel this heartbreak today because the entire world felt Olivia’s unmatched light,” she wrote on social media.

“You saved so many lives,” he tweeted.

Newton-John had multiple battles with cancer over her lifetime, being diagnosed with breast cancer in 1972, and then again in 2013 and 2017.

Debbie Shiell, the director of the Olivia Newton-John Cancer Research Institute in Melbourne, said her legacy would not be forgotten.

“It is because of her that the centre is here. There’s no two ways about it. This was her dream and this was her legacy,” she told the ABC.

At the Olivia Newton-John Cancer Wellness and Research Centre in Melbourne, flags are flying at half-mast.

Similarly, singer Melissa Etheridge said Newton-John was”the first to reach out to me after my cancer diagnosis”.

Sir Rod Stewart, the British singer of the same generation, said she was a “great friend” with “a certain Aussie sophistication.”

“She was the perfect lady, gorgeous, with great poise,” he tweeted.

“Her spandex trousers in Grease were my inspiration for my ‘Do ya think I’m sexy’ era,” he added.

Flowers were piled up around her star in Hollywood as locals and tourists heard the news.