A young couple who had not even been hunting for a home won a hard-fought auction in East Brunswick on Saturday, pipping their rival at the post with a $500 bid.

The three-bedroom Victorian terrace, at 110 Barkly Street, drew two bidders and sold under the hammer for $1,500,500. 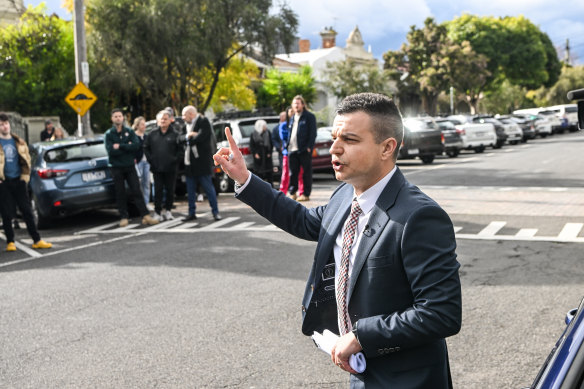 It was one of 551 auctions scheduled in Melbourne on Saturday, in the wake of the latest interest rate rise four days earlier.

Bidding for the deceased estate was slow to start and Ray White Glenroy auctioneer Stefan Stella placed a vendor bid of $1.3 million, the bottom of the price guide of $1.3 million to $1.43 million.

Once an offer of $1.31 million was placed, a second party jumped into the fray and the price rose quickly in increments that started at $10,000 and soon dropped as low as $500, sailing past the $1.4 million reserve.

New owners Darcy and Tessa, who declined to give their last names, plan to make some updates to the home and rent it out in the short term, then move in later and do a further renovation once the challenges in the building industry eased. 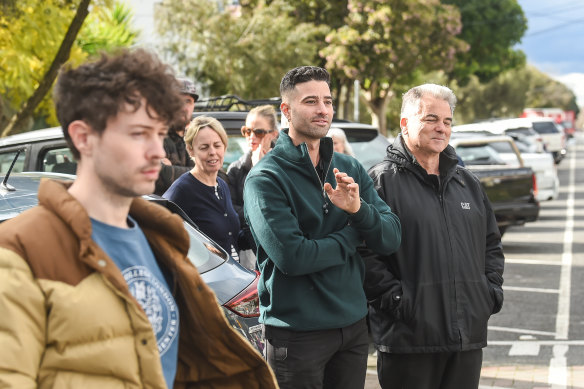 “To be honest we weren’t really looking, we were just looking casually and this one popped up,” Tessa said.

Darcy added: “There’s a bit of concern around with what housing prices are doing but this one really stood out to us, and it turned out we got it.”

Interest rate rises are “certainly something to consider”, he said. “But I think we’re in a good position with renting it out, at this point. From our point of view we can pass that on to the rental market.”

Ray White’s Stefan Stella said some buyers were concerned about the outlook for the housing market now but others saw it as an opportunity, while vendors were starting to adjust.

“Anyone that’s got a genuine reason to sell, they understand that it’s not the market of yesterday,” he said. “Most people have grown accustomed to what’s going on.”

It comes after the Reserve Bank this week lifted interest rates another 50 basis points to 1.85 per cent, reducing the amount buyers can borrow to spend at auction.

The Victorian capital’s median auction price has fallen below $1 million for the first time since April 2021, hitting $990,000.

A South Yarra family home with potential for its own renovation also secured a sale under the hammer on Saturday, fetching $4.42 million.

The four-bedroom residence at 26 Hawksburn Road attracted four parties and sold $620,000 over the reserve of $3.8 million. The reserve was set at the top of the price guide of $3.5 million to $3.8 million.

It sold through RT Edgar Toorak’s Anthony Grimwade to a professional couple.

“The real driving force at the moment is there is so little good quality property on the market,” he said.

“I don’t think people are putting their homes on the market in the numbers we would normally see.”

In Glen Waverley, a three-bedroom house fetched $2.06 million after four bidders competed in person and one bid online from Hong Kong, but the agent thought this was a slightly lower price than if it had sold a year ago.

Offers began at $1.8 million for 5 Graham Street, and it was called on the market at $2 million, Harcourts Judd White’s Andrew Dimashki said, to buyers who plan to freshen the home up and move in.

He thought it might have fetched $2.1 million or $2.2 million if it had sold last year, but said the number of buyers in the market had fallen.

“Interest rate rises are certainly spooking our buyers,” he said.

“A lot of people are doing market appraisals which means a lot of properties are coming onto the market… It’s definitely going to be an improved buyers’ market and a tougher sellers’ market.”

Morrell and Koren buyer’s agent Matt Cleverdon went to the auction of 3/17 Manor Street, Brighton, a three-bedroom villa unit near the bay that attracted downsizers.

“The mood in the market is probably cautious optimism,” he said.

“There seems to be a number of buyers out there but they are cautious about not getting involved in something that runs away from them.”

In Fitzroy, a converted warehouse that could have been used as a residential or commercial property sold for $2.83 million.

The pad at 354 Fitzroy Street drew two bidders and the winner plans to do a long-term renovation and lease it out as a commercial property in the short term, Nelson Alexander Fitzroy’s Kristian Lunardi said.

He said interest rate rises are a focus for buyers, but the moves are less unexpected now.

“Buyers have accepted that rates are going up, or they have gone up, and they can plan accordingly,” he said.

In East Melbourne, a one-bedroom apartment facing the park sold for $667,000 in a busy auction complete with a bagpipe player – Marcus Willson of Professionals Whiting & Co.

“We are confident that even with increased rate rises, there is not going to be doom and gloom,” he said.

“If you are a seller and buyer in the same market it is all relative.”

Most Viewed in Property