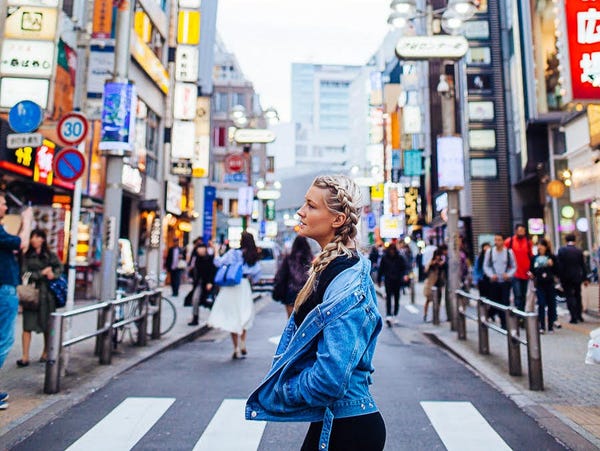 Kat Kamalani, 30, is a flight attendant based in Salt Lake City with five years of experience. While known to Insider, she asked to keep the company she works for off the record.

Recently, while on maternity leave, Kamalani has become an influencer of sorts, sharing glimpses into the life of a flight attendant and revealing some noteworthy things she's learned on the job. At the time of writing, she has 293,000 followers on TikTok, 50,000 followers on Instagram, and 33,500 subscribers on YouTube. A video she posted on TikTok about hotel safety has gotten over 6.2 million views.

Kamalani recently spoke to Insider about what it's really like to be a flight attendant, what she said people don't understand about the job and some of her biggest pet peeves.

Kamalani told Insider that people think flight attendants get paid to travel to desirable destinations such as Hawaii or Paris. But in reality, she said for most employees starting out it's red-eye flights, working holidays, flying multiple short routes a day, and working 15-hour stretches.

As for the glamour, Kamalani admits that the job can get quite lonely.

"You're flying to these amazing places and you're seeing all these amazing things, but you're doing it by yourself," she said. "You're not having anyone there seeing it with you."

In a TikTok video Kamalani said, "they say it's easier to get accepted into Harvard than to become a flight attendant."

She said that she went through an eight-week training course that was six days a week, 15 hours a day — and that only after passing multiple tests and interviews first. To pass the training, flight attendants must score 90% or higher, according to Kamalani, who adds that, despite many people thinking that serving drinks is the bulk of a flight attendant's responsibilities, the lengthy training process only includes a single day of what she describes as "customer service."

The rest of the training really runs the gamut of potential problems flight attendants might face and teaches them everything from how to evacuate the plane to how to deal with an intoxicated passenger, to confronting a terrorist on board, putting out fires, and giving medical aid.

"Flight attendants are not there to serve you, we're there for your safety first," Kamalani said.

"People don't understand that we have a lot of authority when we're on a plane," she continued, adding that flight attendants have the power to kick someone off a flight.

According to Kamalani, that's because if something can happen on the ground, it can happen at 35,000 feet.

"And so if we don't feel comfortable with something or someone we have that complete power to have them not on the plane," she said.

She also adds that flight attendants can open lavatory doors from the outside, though they only do so in the case of medical emergencies or security breaches.

When flight attendants greet you as you board, Kamalani said they're also likely sizing you up

As they welcome you aboard, flight attendants are also trained to assess whether you'll be a safety concern or whether you could help in an emergency.

"Every single person that comes on, we greet them, but we're also analyzing them," she said, explaining that they first look for "ABPs" —  able-bodied people that could back them up in case of an emergency.

"The second thing we're doing is we're looking for abnormal things," she said. "Like if somebody's holding a box that's leaking or producing a certain smell, or we're looking at something that just seems a little bit off." In fact, flight attendants are trained in how to spot human trafficking.

Kamalani said that on long-haul flights, flight attendants have hidden rooms where they can recharge.

"We have keys that let us in: Either we crawl down this little hole underneath or above [passengers], so on long flights like that, there are most likely flight attendants sleeping below you or above you," she said.

They hate being bothered before takeoff

"Ninety-nine percent of the time, we're not going to be giving you a drink or a blanket or headphones before we take off," Kamalani said, explaining that pre-takeoff flight attendants are busy with "about a million safety checks."

"When people ring their call light button to collect trash or want headphones or want food or drinks or whatever it is, we're not going to give it to them," she said, calling it a safety breach. "We'll start serving once we're in the air."

The only exception, according to Kamalani, is if a passenger needs water to take medicine.

That said, Kamalani adds that a little thoughtfulness can go a long way in getting you some special treatment.

"Almost 99.9% of the time if you bring your flight crew some kind of little gift card or candy bar or treat or a pen, the flight crew is going to hook you up with whatever you want and make sure you're taken care of on that flight," she said. "A little gesture like that goes a really long way for a flight crew, especially when you're flying all day and dealing with angry people."