Your ticket to ride! A guide to Interrailing around Europe – at any age – as the pass that links 33 countries celebrates its 50th birthday

Happy birthday Interrail! The European train pass turns 50 this year. For thousands of us, the mere mention of it conjures up memories of carefree travels in our teens and twenties: baguettes and jam for breakfast in Nice, snoring Swedes in the hostel in Seville and overnight trains to Trieste – before careers, mortgages and children came along.

This summer Interrail has reported a surge in passenger numbers, as people head off on their travels again while trying to avoid the current snarl-ups which plague airports across Europe.

What you may not realise is that the Interrail pass, which gives access for up to three months across the rail networks of 33 countries, is not just for those aged under 28. 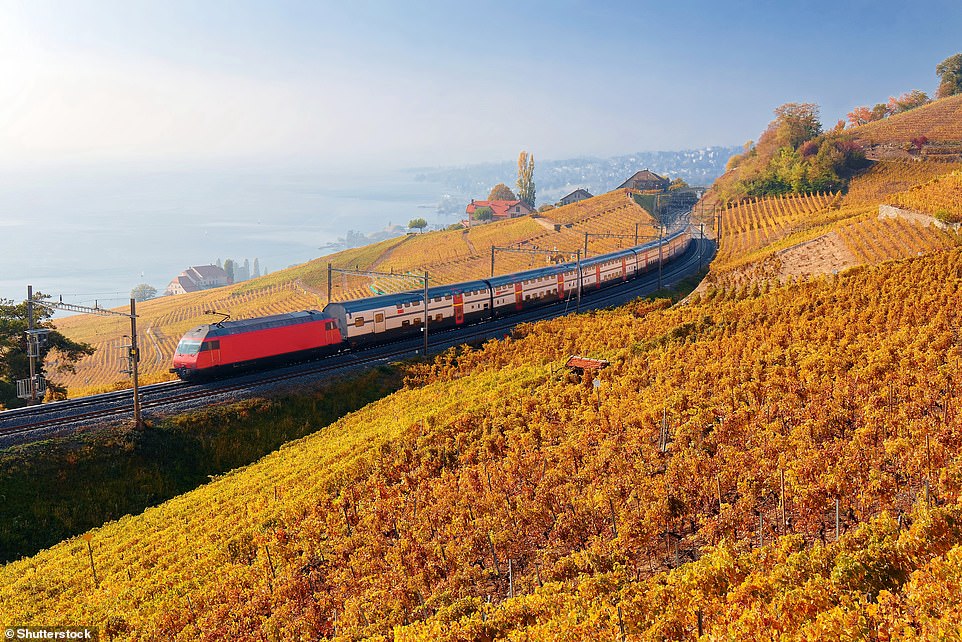 Interrail, the European train pass turns 50 this year. This summer, it reported a surge in passenger numbers, as people head off on their travels again while trying to avoid the current snarl-ups that plague airports across Europe. Above, a train passes through vineyards above Switzerland’s Lake Geneva 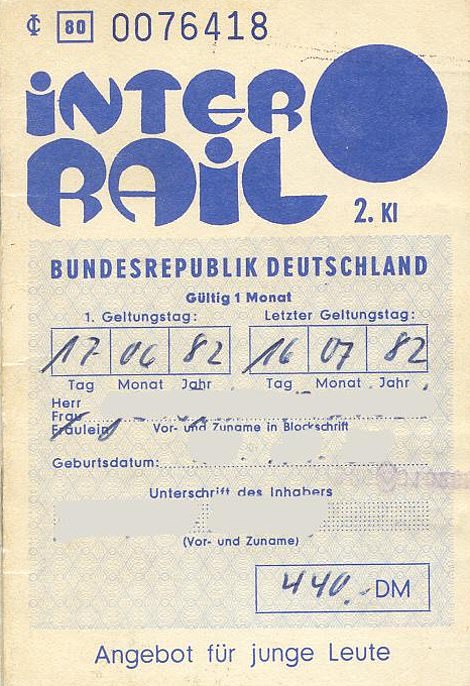 Anyone can buy one, albeit at a slightly higher price than the youth fare, although it drops again if you’re 60 or over. And a great thing about travelling by train ‘at a certain age’ is that you can splash out on swisher hotels along the route, indulge at swankier restaurants and hire tour guides to give you a greater understanding of your destination.

Train travel across Europe is a boon for those who believe the journey is as important as the destination, meandering past heat-scorched olive groves, pine forests, mighty rivers, and sleepy market towns. You get to watch all human life getting on and off at stops along the way with the chance to offer a ‘bonjour or an ‘auf wiedersehen’ to those who might sit opposite for an hour or two.

In 1972 the pass was launched with a fare of £27.50 and immediately proved popular, with 100,000 snapped up. This year there are various options to choose from, which lets you travel, for example, second class for five days within a month-long period for £239.

Or, if you’re feeling ritzy, splash out for first class for just £80 more. If time is a luxury, a three-month pass that allows travel second class every single day costs from £765.

One thing that has changed immeasurably since the early days of Interrail is the speed of getting from A to B.

Thanks to Eurostar and European highspeed trains, it’s entirely feasible to leave London in the morning, change in either Brussels or Paris, and be in Berlin, Zurich, Milan or Barcelona in time for dinner.

And although it’s certainly a long day, you could even make it from St Pancras International as far as Rome just in time to be tucked up in your pyjamas before the clock strikes midnight. 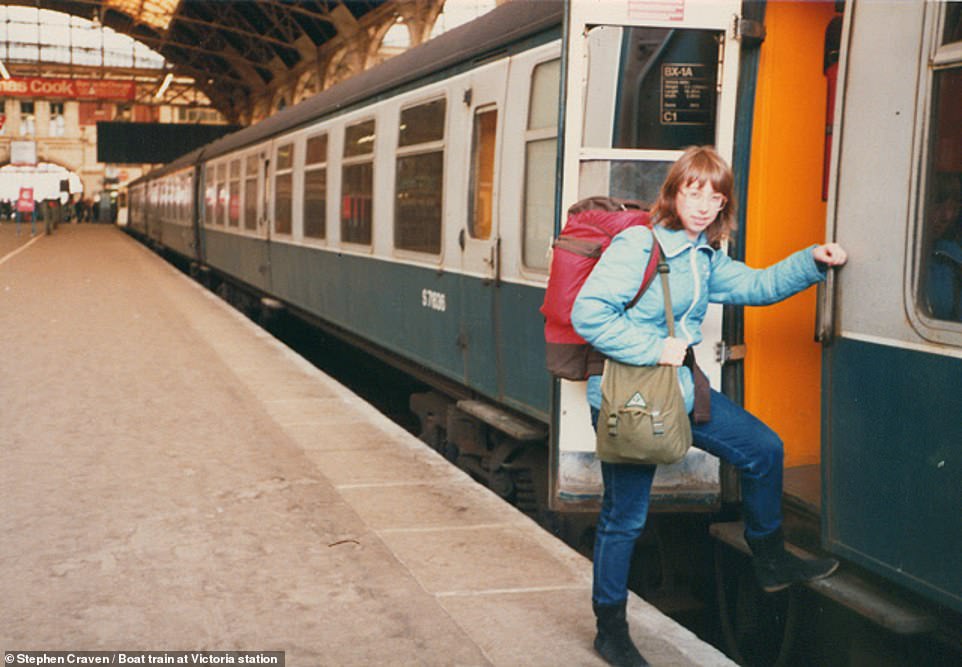 A backpacker setting off on an Interrail holiday in 1985. She’s boarding a train at London’s Victoria Station, planning to travel to France via Dover. Picture courtesy of Creative Commons 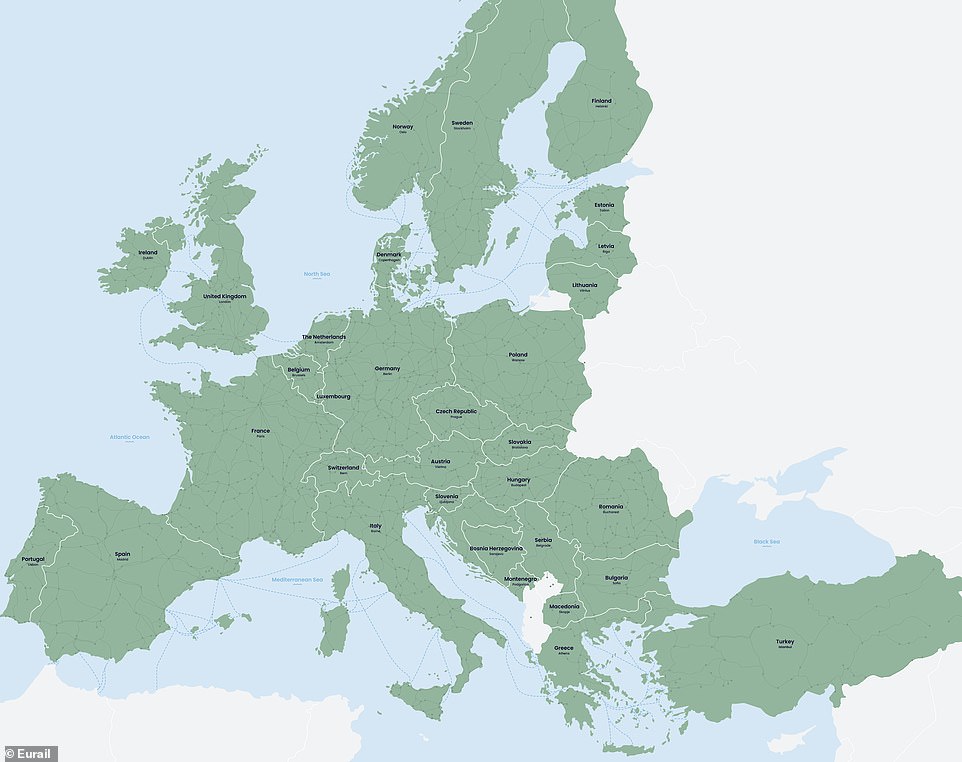 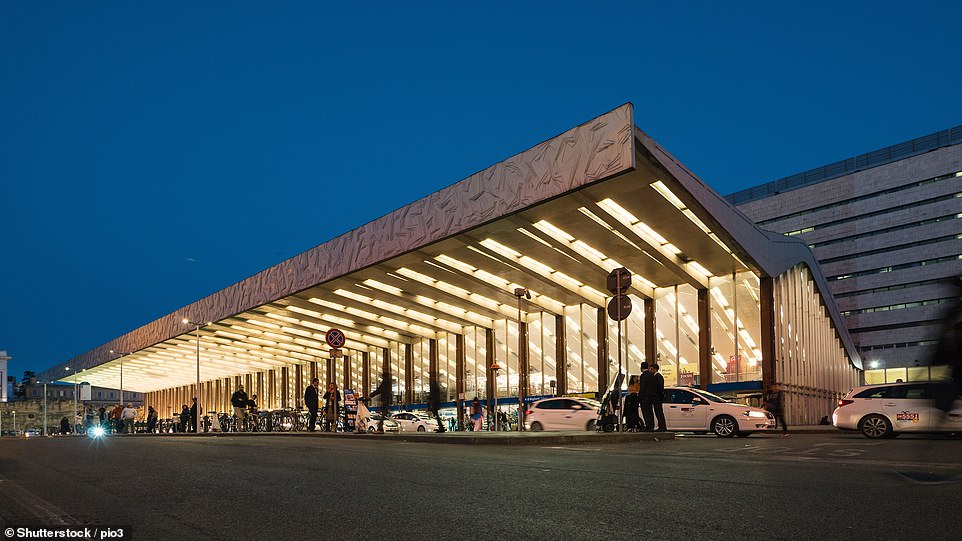 Thanks to Eurostar and European highspeed trains, you could even make it from St Pancras International as far as Rome in one day. Pictured is Roma Termini station

Another change is the resurgence of sleeper trains. Yes, couchettes, where you can snooze with complete strangers stacked around you, still exist.

But, if you travel via Vienna with Austrian company OBB and pay a supplement, you could have a private compartment for two with your own loo, shower, and breakfast delivered as the sun rises over the Alps. And with Interrail, an overnight train counts as one day, not two.

If planning is half the fun, incorporate your passions into your holiday. Perhaps you’ve always wanted to see Europe’s greatest galleries and their masterpieces so you could combine the Rijksmuseum in Amsterdam, the Louvre in Paris and the Prado in Madrid. 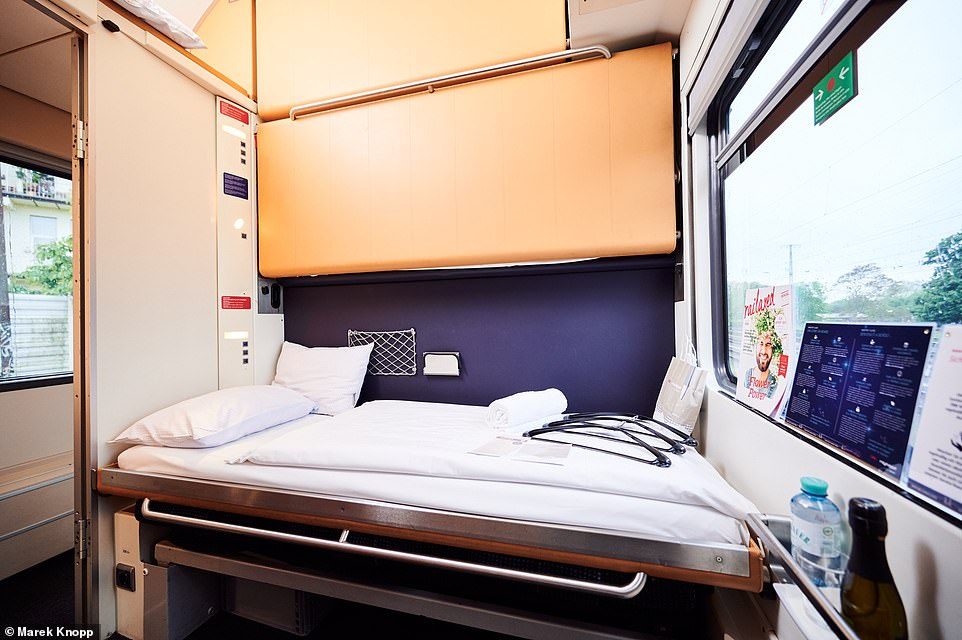 If you travel via Vienna with OBB and pay a supplement, you could have a private compartment for two (above) with your own loo, shower, and breakfast delivered as the sun rises over the Alps 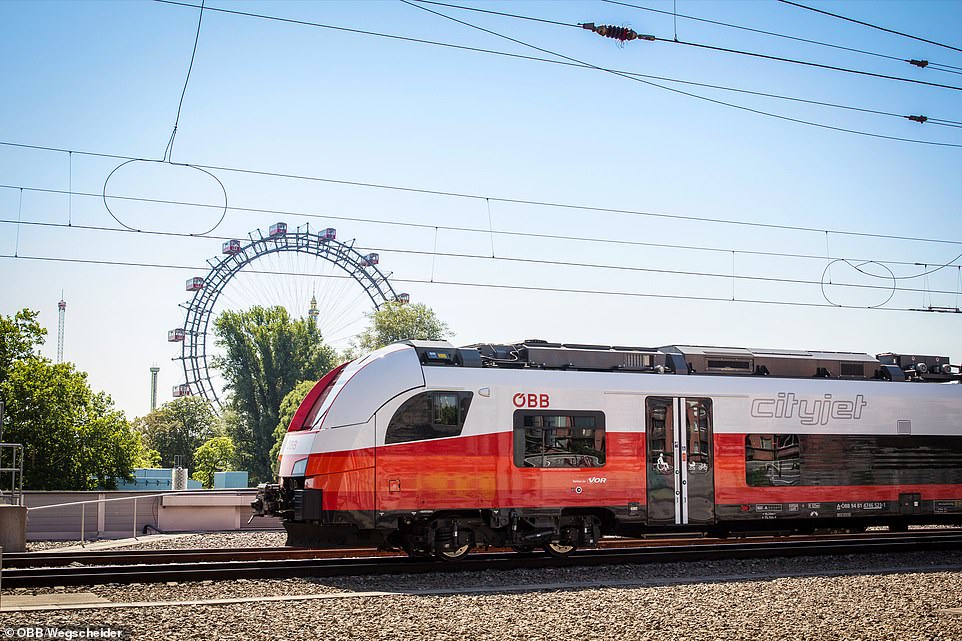 One of the trains operated by Austrian company OBB. This year there are various Interrail options to choose from, which lets you travel, for example, second class for five days within a month-long period for £239

Or it could be football themed, taking in local games with Bayern Munich in Bavaria, Benfica in Lisbon and Juventus in Turin

You could let your tummy be your guide on a foodie journey across the continent, as I chose to do recently, choosing conveniently-timed trains that offer superb scenery, and lead to amazing restaurants and hotels: for example London to Milan, onwards to Marseille then Barcelona and finally Paris; all easily do’able in a week.

In Milan, the luxurious Rosa Grand Hotel (collezione.starhotels.com) is a perfect base for exploring, just around the corner from the magnificent 14th century Duomo, which means being first in line when the cathedral doors open at 9am. Soak up a panorama of the city by climbing its 165 steps to the roof. 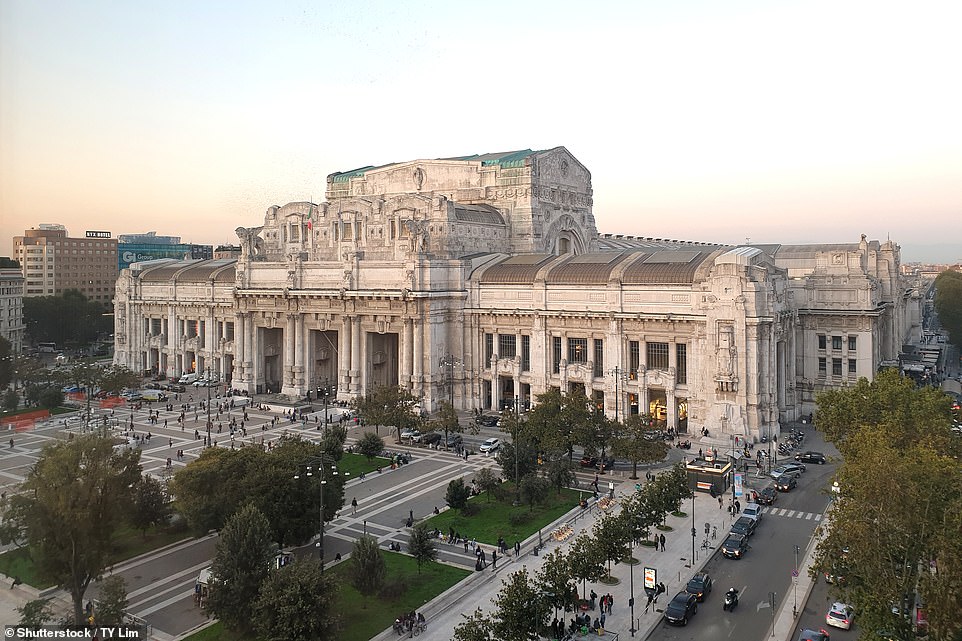 Get the train to Milano Centrale station (pictured) and head for Negroni cocktails and panzerotti – a snack-sized, deep-fried, pasty-meets-pizza 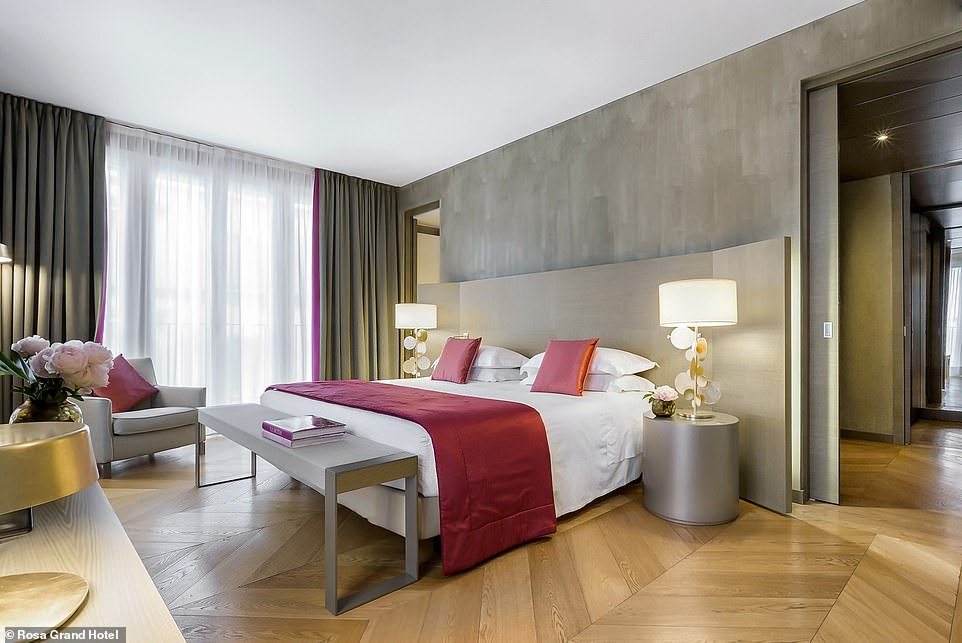 The luxurious Rosa Grand Hotel is a perfect base for exploring Milan. Above is the hotel’s Presidential Suite 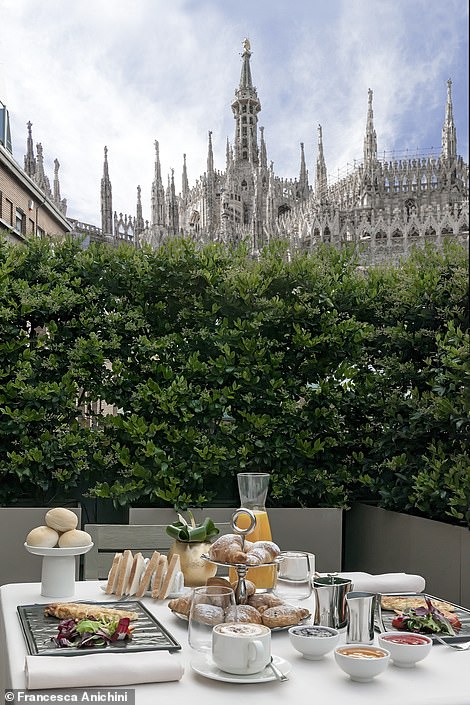 It also means easy access to panzerotti – a snack-sized, deep-fried, pasty-meets-pizza – from Luini on Via Santa Radegonda, which is conveniently close to heavenly ice cream from Vanilla Gelati Italiani on Via Pattari. (£3.50 for three generous scoops).

And there are numerous bars offering refreshing Aperol Spritz and Negroni Sbagliato cocktails to sip as the mercury nudges higher.

Moving on, under the hot Provençal sun in Marseille, you can nibble on sweet North African snacks for breakfast at Le Carthage on Rue d’Aubagne and eat traditional bouillabaisse (fish stew) for lunch at the old port, from where you can catch a catamaran up the coast.

Then shop for locally-produced olive-oil soap, before walking round to the petite Plage de Catalan beach for a refreshing dip in the Med.

Base yourself at trendy Mama Shelter (mamashelter.com), a hotel that’s two metro stops from the main station, and a five-minute walk from a lively square lined with cafes and bars where couples sit gossiping in the shade over glasses of pastis.

It’s a direct four-hour onward train journey from there to Barcelona, past hill-top castles and lagoons filled with flamingos, where the almost-brand-new Hoxton Hotel (hoxton.com) channels seriously sexy vibes with its roof-top pool, taco bar and pizza-slice restaurant.

If you’re overwhelmed where to start with the city’s many tapas bars, book yourself on a guided food tour with either Devour (devourtours.com) or Culinary Backstreets (culinarybackstreets.com). 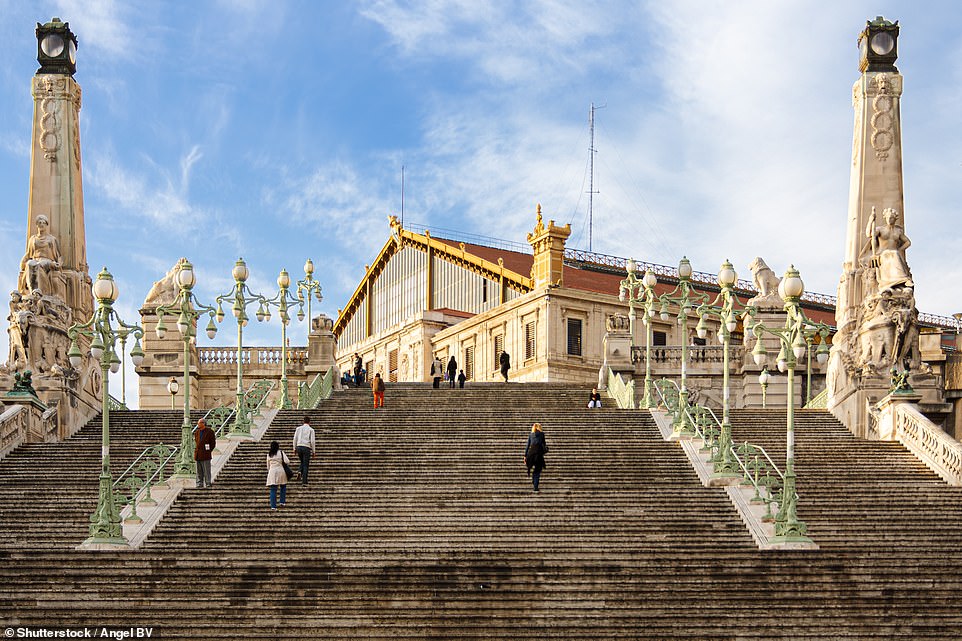 Take the train to Marseille, where you can nibble on sweet North African snacks for breakfast at Le Carthage on Rue d’Aubagne and eat traditional fish stew for lunch at the old port. Above are the steps to Marseille-Saint-Charles station 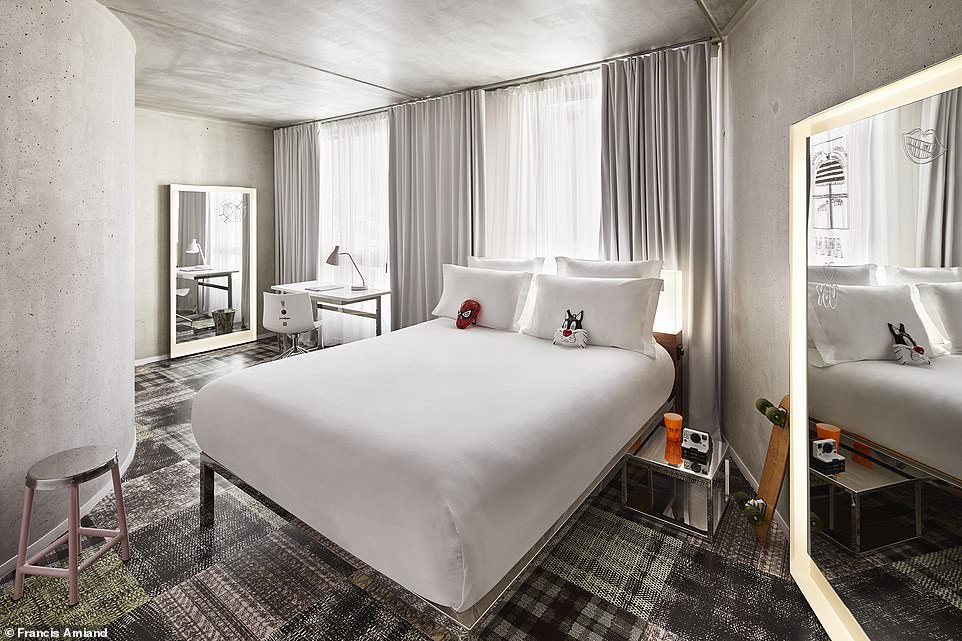 In Marseille, base yourself at trendy Mama Shelter (above), a hotel that’s two metro stops from the main station

As a final stop before the Eurostar home, Paris is an eternal favourite. After two years of pandemic pause, the city buzzes with pavement cafes full, bars livelier than ever, and the Musée d’Orsay and Pompidou Centre bursting.

For a classic bistro meal book at Paul Bert (bistrotpaulbert.fr) or Bouillon Racine (bouillonracine.fr), both of which are tourist-friendly without being touristy.

If your credit card will stretch to it Le Bristol (oetkercollection.com) is the hotel in which to base yourself for a treat before home. 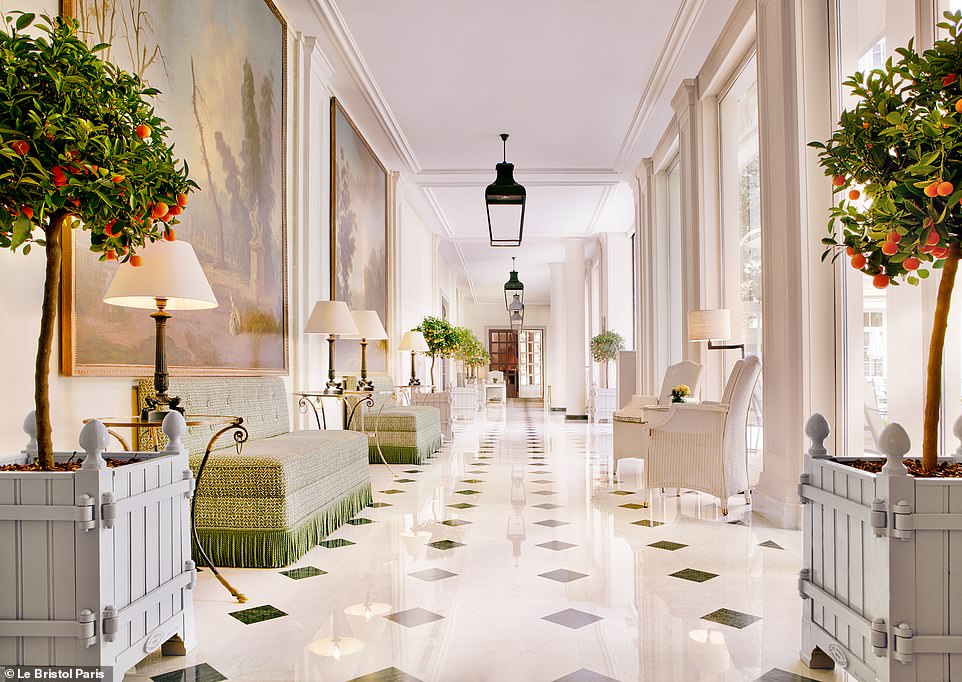 If your credit card will stretch to it, stay in Le Bristol (above) in Paris for a treat before hopping on the Eurostar to the UK

Chic guests keep half an eye out both for the fluffy resident Birman cat who lives by the concierge desk and Emmanuel Macron whose official residence is almost next door, but who wasn’t even born when Interrail was launched.

It’s never too late, though, to buy your pass and enjoy the freedom of Europe’s railways, Monsieur Le President.